(CNN) -- Luis Suarez is set to join Spanish giants Barcelona after Liverpool and the La Liga club announced they had agreed terms for a sale.

And later Friday, Suarez's lawyer said he would be appealing the four-month ban from any football activities Suarez received for biting Italian defender Giorgio Chiellini at the World Cup to the Court of Arbitration for Sport.

Barcelona confirmed that Suarez will be traveling to the Nou Camp next week to undergo a medical before signing a five-year contract.

Despite a reported transfer fee in the region of £75 million ($128.5 million), Liverpool manager Brendan Rodgers said it was with "great reluctance" that the 27-year-old is being sold.

"The club have done all they can over a sustained period of time to try to keep Luis at Liverpool," Rodgers said in a statement posted on Liverpool's official website.

"It is with great reluctance and following lengthy discussions we have eventually agreed to his wishes to move to Spain for new experiences and challenges. We wish him and his young family well; we will always consider them to be friends."

He played a pivotal role in the Reds' title challenge last year, netting 31 times in 37 appearances.

Liverpool came up just short in the end finishing second to Manchester City but ensured Champions League football for the first time in four seasons.

He was found guilty by the English Football Association (FA) of racially abusing Manchester United defender Patrice Evra at a match in October 2011 and given an eight-game suspension.

And at the end of the 2012/13 season Suarez bit Chelsea's Branislav Ivanovic on the arm, resulting in another ban of 10 matches for violent conduct.

It was the second time that Suarez bit an opponent.

While playing for Ajax in 2010 Suarez was suspended for seven games after biting PSV Eindhoven's Otman Bakkal on the shoulder. Then came the incident involving Chiellini in Brazil. 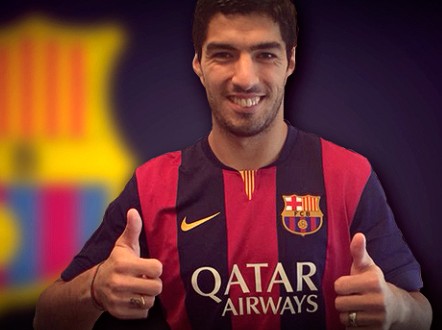 Barcelona released this image of Suarez on Friday.

Despite his disciplinary difficulties, Rodgers praised Suarez for his contribution while at Anfield.

"Luis is a very special talent and I thank him for the role he has played in the team in the past two years, during my time at Liverpool," Rodgers said.

"I think he would be the first to accept he has improved as a player over that period, along with the team and has benefited from being here, as we have benefited from him."

"We hope they revoke this sanction that is blatantly draconian, totalitarian and fascist," Alejandro Balbi told Spanish radio station Cope.

"The right of a footballer to work is being violated, and football should be worried about that. The nine (international) games may seem excessive, but the fact that he can't watch a game of football, or train or carry out his job, we are talking about unpleasant things.

"We knew that FIFA would uphold the ban because they are corporatists. We will not stop, we are going to go to the CAS and we will keep taking the juridical path that is available to us."