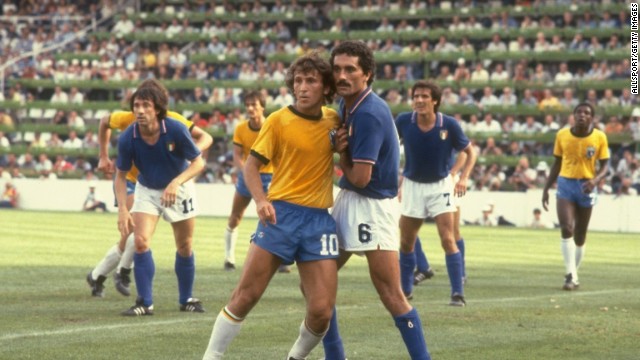 Italy's contest with Brazil at the 1982 World Cup is considered one of the greatest games in the tournament's history. A Paolo Rossi hat-trick ensured Italy won the second round match 3-2 and deprived Brazil a place in the semifinals. Instead, Italy went on to defeat West Germany 3-1 in the final with Rossi on target once again. 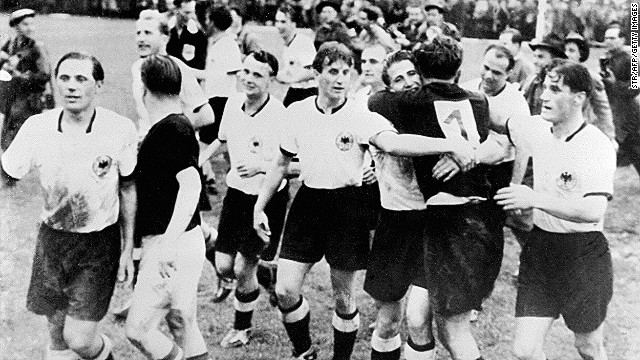 West Germany's 3-2 victory over Hungary in the 1954 World Cup final is known as 'the Miracle of Bern.' The Hungarian side, which had gone 32 games unbeaten and had won gold at the Olympics two years earlier, led 2-0 after just eight minutes. But the Germans fought back, scoring twice before the interval to level the game. It was then left to Helmut Rahn to net the winner late on. 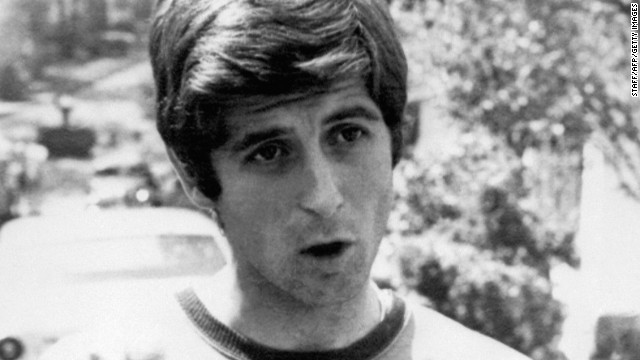 Gianni Rivera scored the winning goal in Italy's 4-3 victory over West Germany at the 1970 World Cup. The semifinal clash went down as an all-time classic with the score poised at 1-1 after 90 minutes. The Italians eventually prevailed but were beaten in the final by Brazil. British journalist David Coleman said of the contest: "As long as people play football, they will talk about this match." 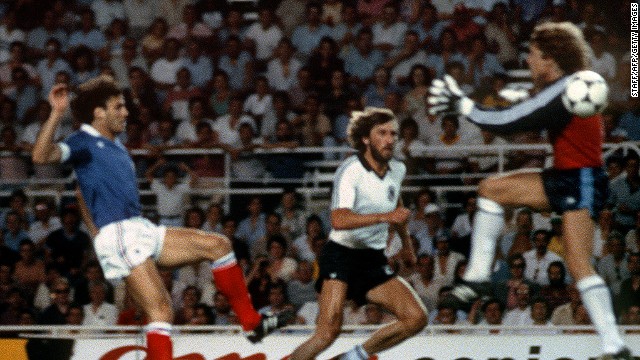 West German goalkeeper Harald Schumacher became a World Cup villain during the 1982 tournament following the semifinal victory over France. Schumacher's foul on Patrick Battiston left the Frenchman with two lost teeth, three cracked ribs, damaged vertebrae, and he was unconscious for almost half an hour. 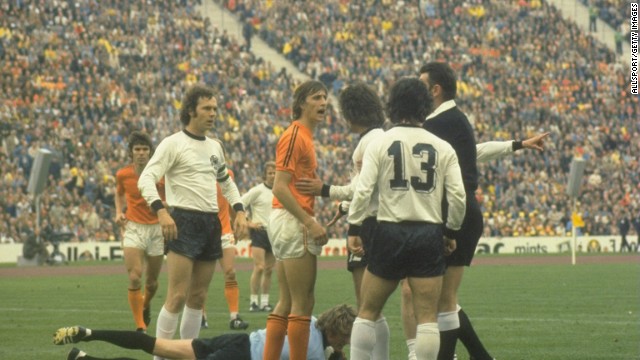 It was supposed to be the year when Johan Cruyff's Dutch side swept to victory and claim the 1974 World Cup with its brand of 'Total Football.' The Dutch side had powered its way to the final and took the lead in the second minute without opponent, West Germany, even touching the ball. But despite going ahead through Johan Neesken's penalty, the Dutch failed to hold on and lost 2-1. 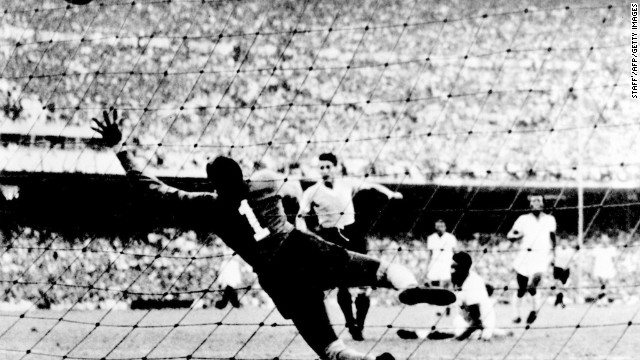 With the World Cup being held in Brazil, the host nation was expected to win the trophy for the very first time in its history. Needing just a point from the final group game against Uruguay, Brazil took the lead through Friaca. The party was underway but then disaster struck, the visitors equalized through Juan Alberto Schiaffino before Alcides Ghiggia netted the winner. 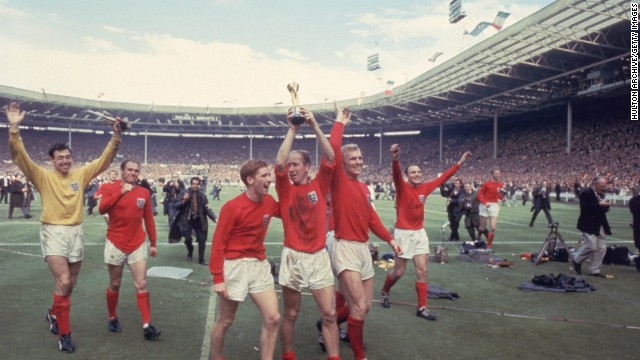 The debate still rages to this day over whether Geoff Hurst's effort crossed the goalline during the 1966 World Cup final against West Germany. With the game poised at 2-2, Hurst's effort was adjudged to have gone in by a Russian assistant referee, much to the frustration over the visiting side. Hurst completed his hat-trick as England won 4-2 to seal its first ever World Cup triumph. 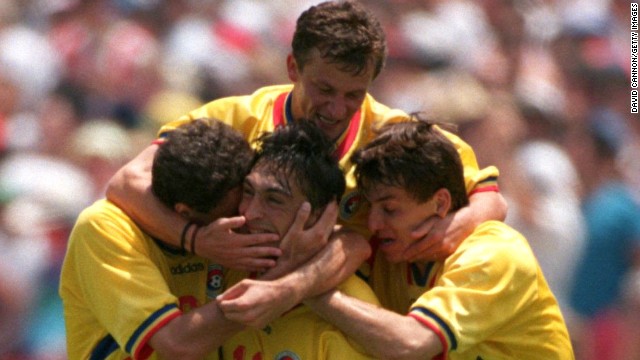 In 1994, Romania proved one of the surprise teams of the tournament as it reached the quarterfinals in the U.S. Its 3-2 victory over former champion Argentina proved one of the highlights. Led by its supremely talented captain, Gheorge Hagi, Romania topped its group before dumping Argentina out of the competition. Only a penalty shootout defeat by Sweden scuppered a bid for a place in the last four. 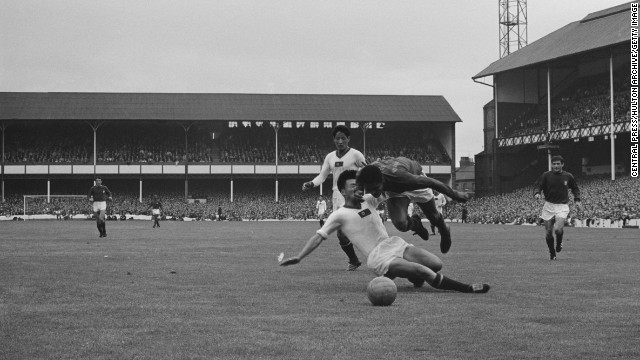 Having already shocked Italy, North Korea roared into a 3-0 lead inside 24 minutes during the 1966 World Cup match against Portugal. Nobody had anticipated that North Korea would provide such a threat and Portugal appeared beaten. But, Eusebio, one of the finest forwards to have ever played, soon turned on the style by scoring four goals for Portugal. Jose Augusto added a fifth and Portugal survived a potential embarrassment. 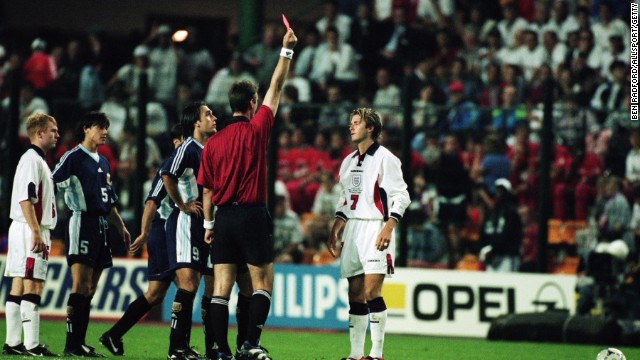 David Beckham's life was turned upside down at the 1998 World Cup when he was sent off during England's last-16 tie with Argentina. The midfielder was red carded after lashing out at Diego Simeone and was largely blamed for his side's failure to progress. The match finished 2-2 after extra-time but England was beaten on penalties.
HIDE CAPTION
The best ever?
'Miracle of Bern'
Rampant Rivera
Schumacher shame
Total Football
Brazil's most painful moment
Was it? Or wasn't it?
Romanian romance
Nearly for North Korea
Beckham's red mist
<<
<

(CNN) -- It is the scenario Brazil had always feared -- the $11 billion party where the neighbors come round and trash your newly spruced up home.

Anybody but Argentina, that is the message which is heard loudest in Brazil ahead of Sunday's final against Germany in Rio de Janeiro at the Maracana stadium.

Not since 1986 has Argentina triumphed in the World Cup, but that wait could be over should Lionel Messi and co. see off the Germans.

Brazil was humiliated by Germany 7-1 in the semifinal -- but an Argentine World Cup final victory might just trump that as an exercise in despair.

After defeating the Netherlands on penalties, Argentina is targeting its a third World Cup win after reaching its fifth final.

In 1978, Argentina, which hosted the tournament, defeated the Netherlands 3-1 after extra time in the final in Buenos Aires to spark spectacular scenes of celebration.

Mario Kempes was the hero, scoring twice against a Dutch side which had lost at the same stage four years earlier against the Germans.

Eight years later, Argentina, led by Diego Maradona, reached the final once again where West Gemany was the opposition.

Did you miss the first half? Here's what it looked like on our live blog:http://t.co/d35ugmUKsG #CNNWorldCup pic.twitter.com/E3Ft0tQFJj

The Germans side, coached by Franz Beckenbauer, got its revenge four years late when it won 1-0 in the final at Italy 1990.

Andreas Brehme's late penalty won a game marred by Argentina's ill-discipline and the sending off of two of its players.

Maradona, who was then playing at Italian club side Napoli, was left in tears as the Germans danced on the field of Rome's Olympic Stadium with the trophy it had so badly coveted for a third time.

It would be 20 years until the two teams met again in the quarterfinals of the 2010 World Cup in South Africa.

Maradona, in his role as coach, watched on in horror as his side was thrashed 4-0 and star player Lionel Messi failed to sparkle.

It is Muller which Argentina will have to watch at the Maracana on Sunday with the Bayern Munich star enjoying another impressive tournament.

The 24-year-old has already scored five goals in Brazil and is one away from joining Colombia's James Rodriguez as the top scorer on six.

"We've got to give our all on Sunday," Klose told reporters. "I know how it feels to lose a final. I want to lift that trophy into the air."

Many of this current crop have grown up together with the likes of goalkeeper Manuel Neuer, midfielders Sami Khedira, Mesut Ozil all progressing from the youth setup.

This is now a record scoreline in a #WorldCup semi-final. Maybe we can make it an unbreakable record? #BRAGER 0-6 pic.twitter.com/8P35RatFll

Six of the team which won the European Under-21 Championships in 2009 are set to start against Argentina with Benedikt Howedes, Jerome Boateng and Mats Hummels all in the defense.

While Joachim Low's side produced a spectacular performance to dismantle Brazil, it has not had a particularly easy ride to the final.

After thrashing Portugal 4-0 in the opening fixture, it was forced to come from behind to secure a 2-2 draw against Ghana.

A nervy 1-0 win over the USA ensured it finished top of Group G and booked a last-16 tie against Algeria.

While Germany was widely expected to win, it was only after extra time that it managed to find a breakthrough.

Substitute Andre Schurrle and Ozil scored the goals and although Algeria got one back late on, the Germans held out for a tense victory.

The quarterfinal against France, played in the heat of Rio, was a rather turgid affair with Hummels' early header enough to secure a 1-0 win.

The 7-1 win over Brazil was achieved after Germany raced into a 5-0 lead by the interval following a mediocre defensive display from the host nation.

So poor was Brazil's performance that Muller revealed how the German players made a decision to ease off in the second half so not to embarrass its opponent.

"With the score the way it was, we said we should avoid being arrogant and to refrain from humiliating the opponent," he told reporters.

"But that's something obvious. Yes, there was this agreement and it came from the players themselves."

There's little chance of Germany letting up against Argentina when the tournament's top two go head-to-head.

Alejandro Sabella, who will leave his role as coach after the final, has led his side through to the final following a hard-fought campaign.

In all of its three group games, only one goal separated Argentina from its rivals.

After beginning with a 2-1 win over Bosnia and Herzegovina, Argentina was made to sweat until the very last minute against Iran before Messi curled home a stunning winner.

Against Nigeria, it was given a real fright before edging home 3-2 courtesy of Marcos Rojo's close-range effort.

Having topped Group F, Argentina progressed to face Switzerland which was defeated by a goal just two minutes before the end of extra-time.

Another 1-0 victory secured a semifinal place as Gonzalo Higuain's strike ensured Belgium was put to the sword.

The semifinal showdown against the Dutch was a dull affair with neither side managing to produce its best football.

Sergio Romero, the Argentine goalkeeper, became the hero after saving two penalties in the shootout before Maxi Rodriguez struck the winning kick.

It sparked wild scenes of jubilation, not just in Sao Paulo but across Argentina where 40 million people celebrated the nation's Independence Day with extra fervor.

Imagine if these TWO played together prime for prime! That would be illegal! #Messi #Maradona #ARG pic.twitter.com/tG59s1MUFh

"Brasil, Decime Qué Se Siente" — translated to "Brazil, Tell Me How It Feels" -- is the song that has been sung throughout the tournament by Argentine fans confident of their team's success.

Much of Argentina's success will depend on Messi -- a man who has already scored four goals in the tournament and will captain the side in his 93rd international appearance.

Now he is aiming to add to his 42 international goals by inspiring Argentina to the biggest prize of all -- and the one which will surely make him one of the greatest players of all time.

No European country has ever won the World Cup in South America -- if Messi gets his own way, that statistic won't change any time soon.

As for millions of Brazilian football fans, who had so desperately sought a sixth world crown, Sunday is the party invitation they had could have done without.

When it comes to famous football referees, Pierluigi Collina -- now retired -- might be the most famous of them all.

The 42-year-old architect from Bologna refereed three games prior to the final, including two involving Argentina, as well as the 2013 Champions League final.

Read: How do you catch Messi?