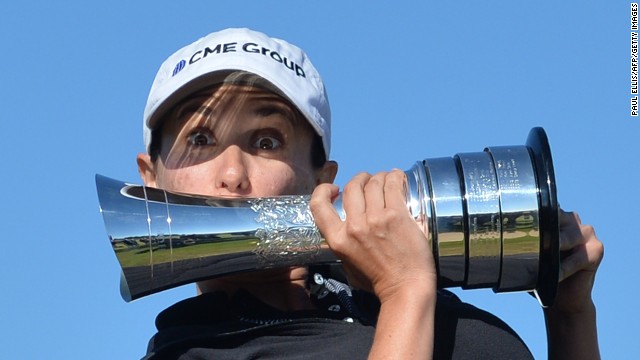 (CNN) -- Mo Martin produced the performance of her life to secure her first major title with victory at the Women's British Open at Royal Birkdale Sunday.

The 31-year-old secured top spot with a stunning eagle on the final hole to finish one shot clear of Norway's Suzann Pettersen and China's Shanshan Feng.

Ranked 99th in the world, Martin, from California, was not expected to challenge at the top of the leaderboard.

But a second shot at the 472-yard 18th landed just six feet away from the pin -- allowing Martin to putt for glory and secure a famous triumph.

"Is this real life?" Martin asked in her post-match interview following her victory.

"It was a tough day of golf today. It was very windy and this course is very challenging.

"So I stayed patient and I fortunately played some really good golf today.

"From the first time I saw Royal Birkdale, I fell in love with it. I think the layout is absolutely phenomenal."

Inbee Park, who had led overnight, slumped to a disappointing fourth place finish.

Meanwhile Justin Rose warmed up for this week's British Open by winning the Scottish Open at Royal Aberdeen.

The Briton's final round six-under-par 65 gave him victory by two shots, which will move him up to world No. 3.

Sweden's Kristoffer Broberg's 14-under par secured him the runner-up spot and a place in the British Open at Hoylake, while Scotland's Marc Warren was third.