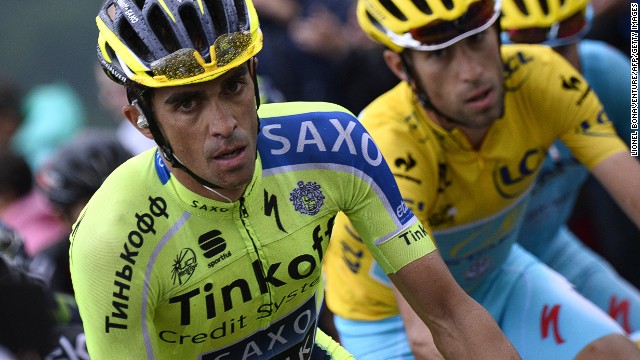 (CNN) -- Two-time champion Alberto Contador is out of this year's Tour de France after suffering a heavy crash during Monday's 10th stage.

The Spaniard had completed 62 kilometers of the 161.5-kilometer stage from Mulhouse to La Planche des Belles Filles when he fell off his bike on the descent of Petit Ballon.

After receiving medical attention at the roadside for a bloodied right knee, Contador rejoined the race on a new bike.

Tinkoff-Saxo teammates tried to help their team captain to get back into contention with the main peloton, but their efforts came to nothing when a tearful Contador called it a day 20 kilometers later.

A black day... @albertocontador abandons @letour after a crash on the descent #TDF pic.twitter.com/iLiFmE6kbD

The 31-year-old won the tour in 2007 and 2009 but was stripped of his 2010 title after testing positive for banned anabolic steroid clenbuterol during that year's race.

After injuring his wrist and hip in a fall in stage five on Tuesday, Froome then came off his bike twice more in wet conditions the following day forcing him to retire.

The 29-year-old British cyclist tweeted his sympathies to Contador following the Spaniard's exit saying it was a "big loss" for the tour before wishing him a swift recovery.

Big loss for the TDF today. Recover well @albertocontador & I hope to see you at the Vuelta.

Nibali went on to win the 10th stage to reclaim the yellow jersey.

The Italian overtook Spaniard Joaquim Rodriguez in the final kilometer of the gruelling mountain stage to claim a second victory in this year's race.