World Cup: Why Brazil should have won 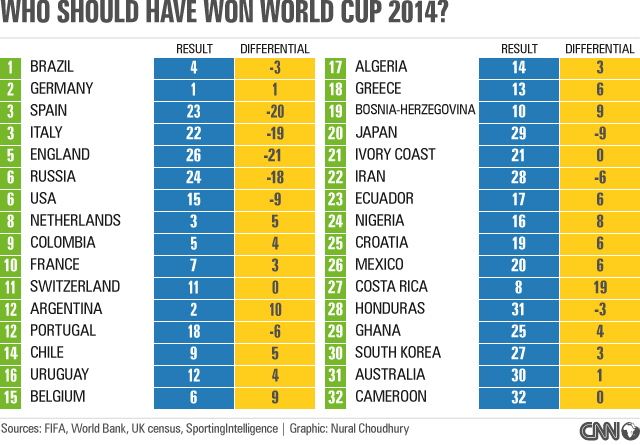 See the full list of how World Cup teams stack up here.

(CNN) -- It's all over now. Germany won the World Cup, which can't have surprised anyone who watched it demolish Brazil en route to the championship.

But according to CNN's calculations, Brazil should have taken home the trophy.

While Lionel Messi was battling Thomas Muller to be the tournament's top goal scorer, while Tim Howard and Guillermo Ochoa were batting away shots on goal, while Roy Hodgson and Fabio Capello were stalking the sidelines, CNN was looking at the bigger picture.

We started with the FIFA world ranking for each team going into the World Cup, starting with Spain ranked number one, all the way down to Australia at 62.

Then we looked at how much each country was paying its manager.

Russia topped that table, paying Capello nearly $11.5 million a year, according to Nick Harris of Sporting Intelligence. England came a distant second, with Italy, Brazil and Switzerland rounding out the top five.

Next we added in each country's population size, since bigger countries have larger pools to draw potential soccer stars from. The United States was the biggest country to qualify, followed by Brazil, Nigeria, Russia and Japan. Bosnia-Herzegovina and Uruguay were the smallest, both with populations under 4 million.

Then we averaged the three measures -- ranking, manager salary and population size -- to come up with our own prediction for how each team would fare in the World Cup.

Our predicted winner: Brazil. It was the second-largest country in the tournament, ranked third in the world by FIFA, and with manager Luiz Felipe Scolari's $3.8 million salary putting him fourth.

It fared well enough in the group stages, but once things got serious, the hosts completely fell apart, conceding 10 goals in their last two matches and scoring only 1.

That left it in 4th place, three below where we predicted it should end up.

Germany, on the other hand, overperformed, but not by much.

We picked it to come second, and it came first, for a rating of +1.

Our statistics also tell us who the biggest over- and under-achievers of the tournament were.

Some are obvious. The numbers suggest Costa Rica should have come 27th overall, but it trounced the big boys in the Group of Death and came out 8th, by FIFA's official statistics.

Second-place Argentina also did far better than our predictions.

Yes, it was ranked fifth in the world going into the tournament, but it didn't shell out big money for a manager -- Alejandro Sabella was the 22nd-best paid coach -- and Argentina falls in the middle of the population table. Of course, having Messi be one member of that population makes a difference, even if the Hand of God didn't touch him in the final.

Spain, on the other hand, was a giant dud. Ranked third in the CNN table, it actually came 23rd.

Only one nation came out worse: England. Ranked 10th in the world, with the second-best paid manager and and the 11th-largest population, we think it should have come fifth. It came 26th.

Italy and Russia also suffered in our rankings, partly for paying their managers so handsomely. We say Italy should have come third, not 22nd, and Russia should have tied at sixth place with the United States.

The numbers also show one remarkable coincidence. On paper, Belgium and Greece are almost identical.

Both have populations of about 11 million people, and the two nations paid their managers exactly the same salary.

Both teams did better than we predicted.

We picked Greece to come 18th, but it managed 13th.

Belgium did even better, coming sixth, nine places higher than our calculations suggested.

Read: Argentina vs. Germany: By the numbers