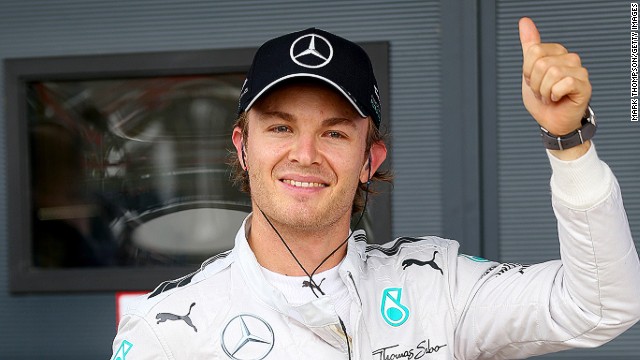 Life's good for Nico Rosberg after a wedding and now a new contract with the Mercedes F1 team.
STORY HIGHLIGHTS

(CNN) -- What a week it's been for Formula One ace Nico Rosberg.

A new wife, a World Cup win for his beloved German football team and now a new contract with the Mercedes team.

Rosberg heads to his home grand prix in Germany this weekend on cloud nine -- and still leading the 2014 world championship by four points from Mercedes teammate Lewis Hamilton.

We are over the Moon. It was very special to share our wedding day with our closest friends and family. pic.twitter.com/kLYTkq179y

The celebrations carried on as Rosberg enjoyed a rare race free Sunday by watching Germany defeat Argentina to lift the World Cup for a fourth time.

The Mercedes driver -- who had sportingly invited French Lotus driver Romain Grosjean to watch Germany defeat France in the quarterfinals after qualifying for the British Grand Prix -- plans to mark Germany's triumph with a special helmet for his homecoming race.

He will race around Hockenheim with football's World Cup trophy at the centerpiece of a black, yellow and red design.

Rosberg, the son of 1982 F1 world champion Keke, also goes to Germany with a multi-year contract extension in his back pocket.

The former Williams racer, who joined Mercedes when the Silver Arrows returned to the sport in 2010, has signed on for an unspecified number of seasons.

"I'm looking forward to the next years together," said Rosberg, who has raced to six victories with the German team. "We will keep pushing to win even more races -- and hopefully championships."

Mercedes motorsport chief Toto Wolff said: "Nico's speed, commitment and focus have all helped to give clear direction and to drive the team forward since 2010.

"With his performances in 2014, Nico has demonstrated to the outside world what we already knew in the team; that he is one of the very top drivers in Formula One."

Rosberg made his F1 debut with Williams in 2006 but his reputation has grown at Mercedes, particularly as he proved equal to the sport's seven-time world champion Michael Schumacher during their three years as teammates.

Read: Will Schumacher ever recover?

Since replacing Schumacher in 2013, Lewis Hamilton has provided another benchmark for Rosberg to measure himself against.

The English 2008 world champion is generally perceived to be the quicker driver but Rosberg has shown in 2014 that he is developing into a more rounded racer.

Hamilton signed a three-year contract when he joined Mercedes with the deal due to expire at the end of 2015.

this will be my Hockenheim World Cup special edition helmet with the FIFA trophy. How do you like it??? @DFB_Team pic.twitter.com/ZKE4gh5EpA

From junior teammates and friends, Rosberg and Hamilton are now locked in an intriguing battle for the 2014 world title.

After Hamilton's victory at the British Grand Prix put him back in the title hunt, Mercedes non-executive chairman Niki Lauda predicted of his Mercedes charges: "They will fight until the end like you do not believe to be world champion."

Rosberg may already be enjoying an annus mirabilis but he still has his eye on the prize he really wants -- his first F1 world title.

Read: Wheels roll on future of F1 tires at Silverstone