Rory McIlroy hits the front early at the British Open 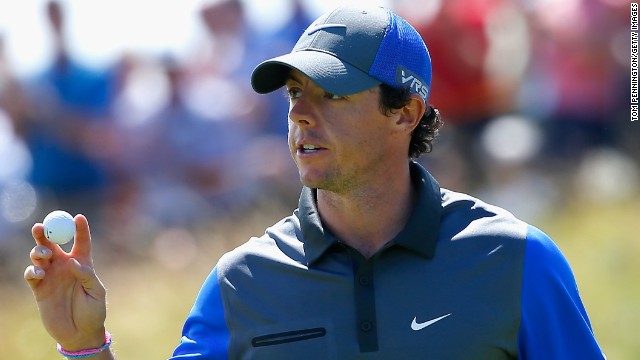 Rory McIlroy had reason to smile after an opening six-under 66 gave him the lead at the British Open at Hoylake.
STORY HIGHLIGHTS

(CNN) -- Rory McIlroy led an early morning assault by the world's best golfers on a toothless Hoylake Thursday to claim the first round lead at the British Open with Tiger Woods also making a promising start to his first major of the season.

Northern Ireland's McIlroy carded six birdies in a pretty much flawless first round of six-under 66 on the Royal Liverpool seaside links, missing several other opportunities as he peppered the flags with his approach shots.

Warm weather conditions and negligible winds, particularly for morning starters like McIlroy, saw a clutch of stars break 70, including Woods, who opened with a three-under-par 69.

Read: On the tail of Tiger

Playing on his second tournament since late March after back surgery, Woods looked rusty on the front nine as he slipped one over, but a hat-trick of birdies on the back nine saw him finish with a spring in his step.

Woods won the British Open in 2006 when it was last held at Hoylake, but has been stuck on 14 major victories since 2008.

McIlroy has two majors to his name, but will be hoping his habit of following up a strong opening with a poor second round will not rear its head again.

"We had perfect scoring conditions out there this morning. There wasn't much wind early on. There were plenty of opportunities to make birdies and I was able to take a few of them," he told the official British Open website.

"I'm looking forward to getting back out there tomorrow," added the 25-year-old former world number one.

Matteo Manassero was another young golfer to take advantage of the calm conditions, the 21-year-old chasing McIlroy on five-under after a 67.

Fellow Italians Edoardo and Francesco Molinari were among a group on four-under and Manassero is hoping the challenge will continue.

Garcia, still to win that elusive first major, acknowledged that early conditions were kind. "Difficult to get a nicer day to play golf than today and if you manage to play well, even better!!" he tweeted.

Late on, world number one Adam Scott joined them on 68, one of the few afternoon starters to make a run at McIlroy as the wind picked up a little, with scores on average three shots higher than the morning players.

Read: How many majors can Bubba win?

2012 winner Ernie Els was among those to struggle, missing two putts from inside a foot on the opening hole for a triple bogey seven and never recovered his composure with a seven-over 79.

Mickelson slipped to a two-over 74 after going out of bounds at the last, while Watson tripled bogeyed the 11th on the way to a wayward 76.

Home hope Rose stayed in contention with a level-par 72 -- on a day 49 players broke par.