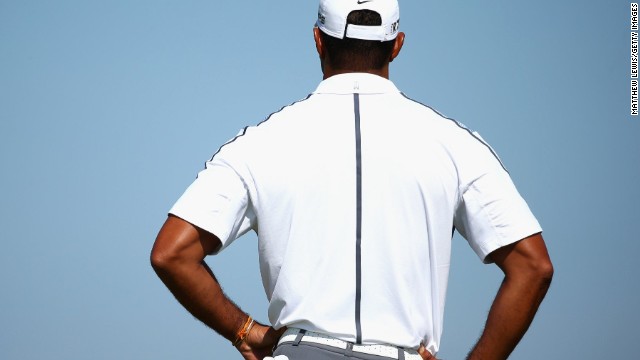 He's back -- Tiger Woods started his first major this year at the British Open after being out for most of the season with a back injury. 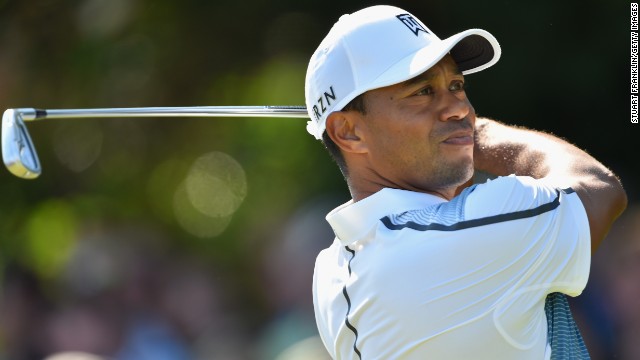 Woods had a shaky start to his round, suffering successive bogeys on Royal Liverpool's first two holes. 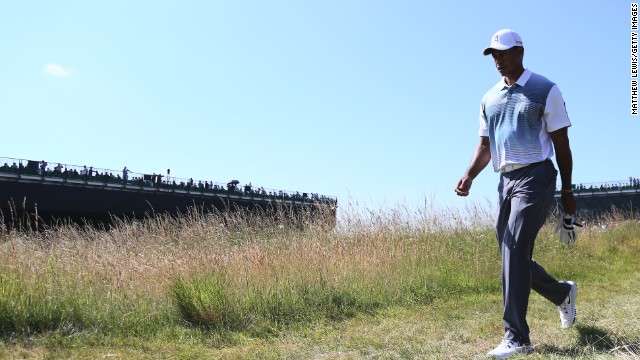 The American got his round back on track with a birdie at Hoylake's par-five fifth. 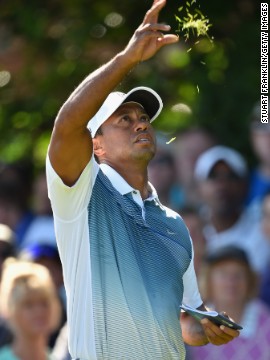 Despite Woods' stuttering start there was huge interest in his round -- from media and fans alike. 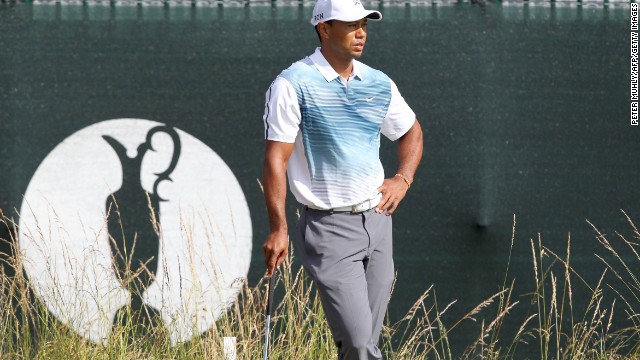 At the end of the front nine holes, the 14-time major champion was one over par with plenty of work to do. 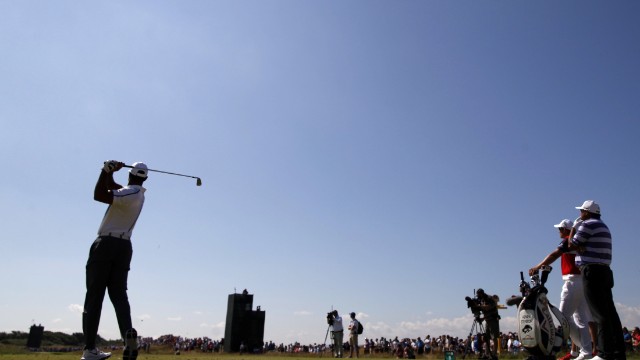 Ahead of the Open, golfing great Gary Player told CNN that: "Woods is definitely the most talented man who ever held a golf club in his hand." 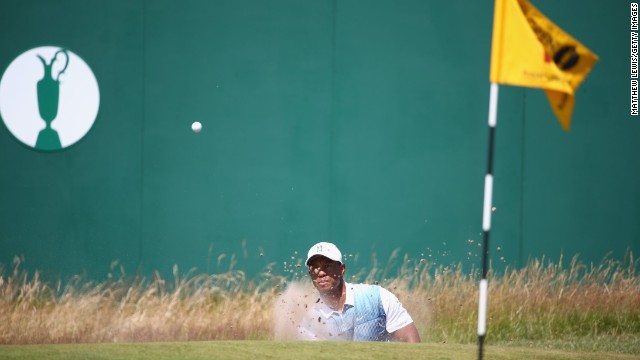 And on the back nine, Woods quickly moved to one under after two birdies. 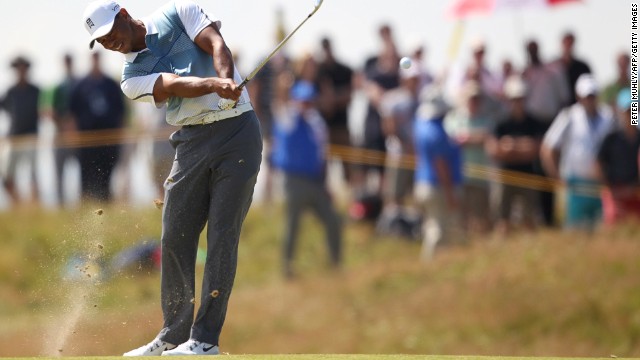 The thousands following him cheered as he went on a run of five birdies in six holes. 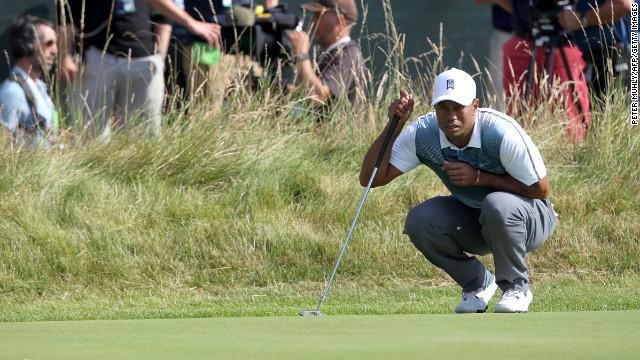 By the end of his round Woods was very much in the mix at the top echelons of the leaderboard after carding a 69, three under for the day. 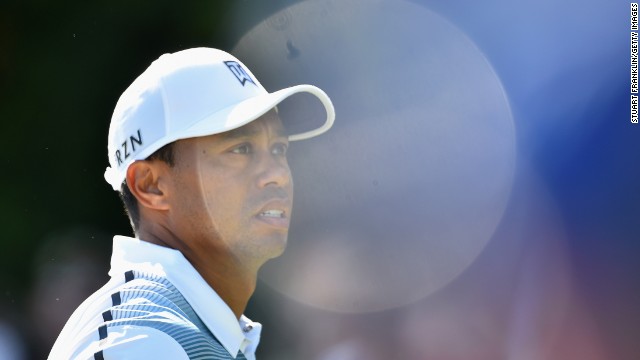 Hoylake, England (CNN) -- You can tell when Tiger Woods is stalking a major championship.

The air gets thicker, the galleries larger and the bristle of excitement notably louder.

Especially in this part of the world, because Liverpool's love affair with Woods clearly hasn't slowed in the eight years since he last walked the fairways at Hoylake and claimed the 2006 British Open title.

But that exuberance might have frayed the edges of Tiger's love for Liverpool, such was the determination of some of the thousands of fans who followed him around Thursday to capture a memento.

"There were a lot of cameras out there and we were backing off a lot of shots," the 14-time major champion told reporters after his opening round of three-under-par 69, a further three behind clubhouse leader Rory McIlroy.

"It was tough. Unfortunately people just don't put their phones on silent and some of the professional guys were getting on the trigger a little early.

"I've had numerous years of dealing with this. You've just got to stay focused out there."

It might have been Woods' first major for nearly a year, injuries taking their toll on his 38-year-old body, but the surroundings were at least familiar.

Victory here was his first since the passing of his father. After tapping in on the 18th green, the then world No. 1 collapsed into tears.

Perhaps that is the reason Hoylake holds him in such affection, given it was a rare occasion when one of sport's great stonewallers turned on the waterworks.

"I was here that day when Tiger won and then broke down," says Nick Smith, a native of Liverpool and one of many who tailed Woods for the entirety of his round on Thursday.

The landscape is different eight years on -- Tiger's walk isn't quite so tall.

His last major title came barely 18 months after success at Hoylake, and the following years have been a litany of near misses, injuries and one off-course maelstrom of his own making.

But the fascination for him remains undimmed, illustrated by the thousands that roared him off the first tee just after 9 a.m. on a still and sunny Wirral day.

While he still commands huge crowds, there seems a tangible shift in mood; that people have come to see the man who once ruled supreme, rather than someone who can hit those heights again.

There was still the odd unwitting sheep among a devout flock.

One man who asked "Who is this?" as Tiger strolled down the first fairway was met with a rather stinging response: "There's 5,000 people following him, who do you think it is?!"

Though Woods' gait might not have been entirely recognizable to all, the quality of his golf during Thursday's fledgling stages was in keeping with recent disappointments.

Two dropped shots on the first two holes elicited groans from the gallery, one man remarking to no-one in particular: "There's always next year, Tiger."

As the world No. 7 reached the fourth green, faces pressed against the windows of a double-decker bus crawling past on the main road that flanks the eastern part of the course.

A par there seemed to lift Woods, who birdied the next to energetic applause.

Chances came and went, one missed birdie putt on the 10th prompting a sigh as another patron opined: "He used to rattle those in for fun."

Woods needed a spark from somewhere, and he got it on the back nine.

A birdie from off the green at the 11th saw the first release of that famous Woods fist-pump, amid cheers from those who'd scrambled up grassy banks to net a glimpse.

It isn't just spectators who stick to Woods on his way around the course.

After a fine shot on the par-four 12th, which would yield another birdie, Woods strode over the brow of the hill with a cavalcade of cameramen, photographers and reporters in tow.

Perhaps this is why he can appear emotionless and steely while walking the links -- it's simply his method of blocking out the circus that follows his every move.

A expertly-struck shot on 13 carved a path through the steadily building wind thrown up from the River Dee and set up another opportunity.

The bellow that communicated its success underscored the joy those present felt at capturing their own slice of Woods magic firsthand.

A wayward approach to the 14th resulted in a dropped shot, reclaimed immediately at 15.

And by the time a delicate chip on the 16th tiptoed towards the hole and offered a tap-in for birdie, Woods had made a blitz of five in six holes.

Pars followed on 17 and 18, when he was clearly irritated again by an eager photographer's trigger finger, but his final tally of three-under was more than had looked likely after that inauspicious beginning.

"I didn't get off to the best of starts but I turned it round," he said.

Rory McIlroy holding at the top of the leaderboard after an opening 66. Story: http://t.co/rHU2KZo4Gs #TheOpen pic.twitter.com/nDSRRVlroX

"The forecast the next few days is supposed to be iffy -- guys aren't going to go over and above.

"There's a ton of players between two and four under par and that is the way I think this championship is going to unfold."

One brave journalist ventured that it had felt like "old times" as the American went on his run of five birdies in six, a statement that was met with a roll of the eyes and the reply: "It wasn't that long ago."

But the signs are promising. Not only did Woods turn things around, he also reported feeling fitter each day after the back surgery that sidelined him for four months.

"I'm getting stronger, I'm getting faster, I'm getting more explosive and the ball is starting to travel again -- those are all positive things," he added. "It felt good to be out there competing again."

With that Woods left a crowded press tent and made a beeline for the practice range.

"I thought he'd be taller than that," a punter said as Woods bustled past.

Give it a few days and he just might be.