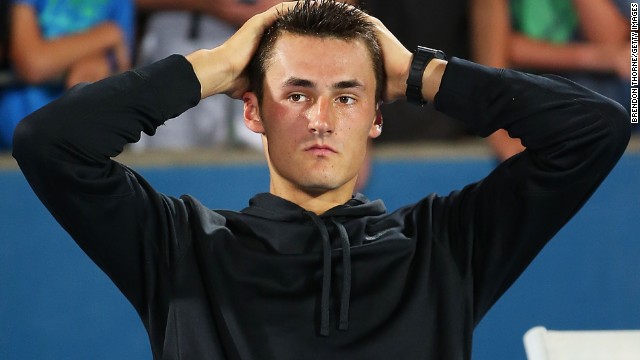 IMG said in a tweet Wednesday that it "mutually ended" its relationship with the 21-year-old, days after the Sports Business Journal reported the sides were going their separate ways before their contract expired.

When asked for confirmation that the contract was cut short, IMG didn't immediately respond and an interview request made to the ATP early morning Bogota time for Tomic wasn't immediately returned. Tomic is competing at a tournament in Bogota.

IMG and Bernard Tomic have mutually ended our relationship. We wish Bernard great success on and off the tennis court.

CNN understands that the Tomic camp has approached his former agent, Lawrence Frankopan, who is now at StarWing Sports. StarWing Sports represents, among others, Chris Evert and 2014 Australian Open champion Stan Wawrinka.

Daniel Kaplan, a reporter with the SBJ, tweeted that IMG "appears 2 have had enough" with Tomic.

Philippoussis: From serving to surfing

Tomic had multiple hip surgery this year and his ranking has fallen almost 100 spots to 124th in two years but he -- and his father -- have repeatedly made headlines for their indiscretions.

The player himself was on the wrong end of the quickest loss -- not including retirements -- in recorded ATP history when he was pummeled by Jarkko Nieminen in 28 minutes in Miami in March; he has also been caught speeding more than once.

He's been accused of tanking (or not trying in matches); was pictured topless receiving a lapdance in November; and booed when he retired against Rafael Nadal at the Australian Open in January.

Police had to be called late in 2012 when Tomic and another man were fighting outdoors in an apartment complex.

IMG and other agencies were attracted to Tomic while he was a junior, given his eye-catching results.

And his stature grew when he in 2011 became the youngest man since Boris Becker 25 years earlier to reach the Wimbledon quarterfinals.