Want to buy a plane that won't break the bank? You need a 'caroplane' 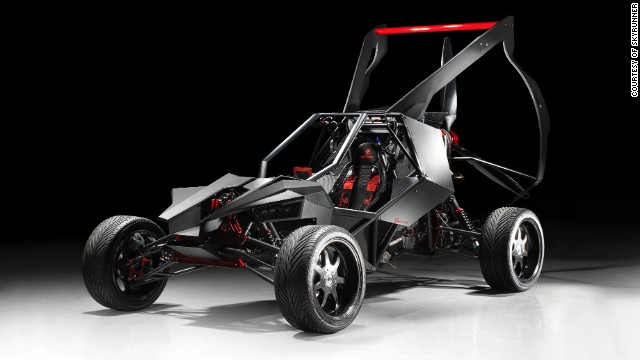 Cost-cutting is driving recreational aircraft forward. The SkyRunner (pictured) stands for affordability and adventure, a tantalizing ride for any adrenalin junky. 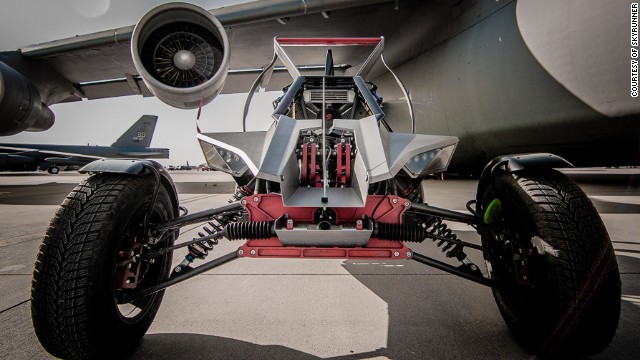 Created by UK-based aircraft manufacturer Parajet, this all terrain vehicle can soar up to 15,000 ft with its low carbon petrol engine. 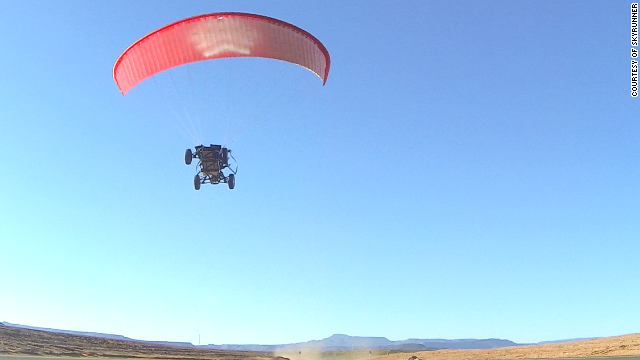 Trialed over 5 years, the sports car 'with wings' is ready to sculpt a new arena for private air travel where consumers aren't expected to shell out much more than $80,000. 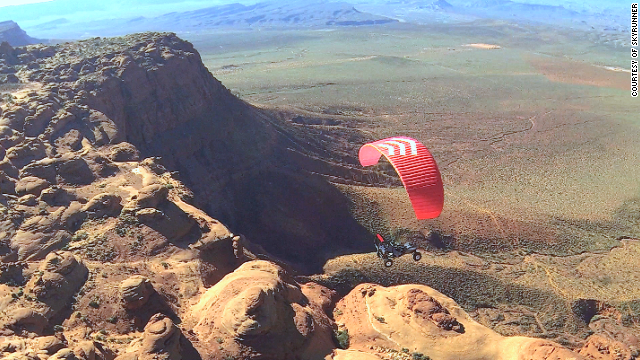 With an EcoBoost engine for swift takeoff and paraglider wing technology for minimal turbulence, the SkyRunner promises comfort and stability with little effort. 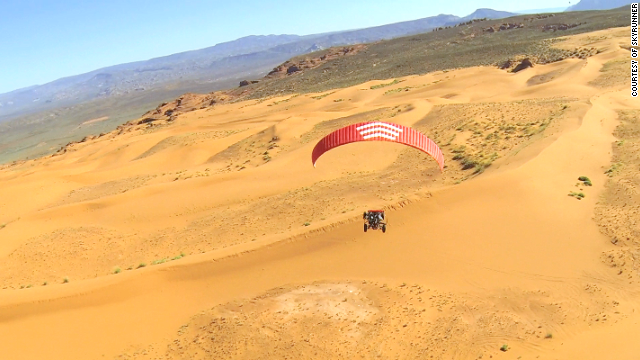 In the rare occasion of wing or engine failure, the compact ride glides softly towards the ground assisting the passenger to safety. 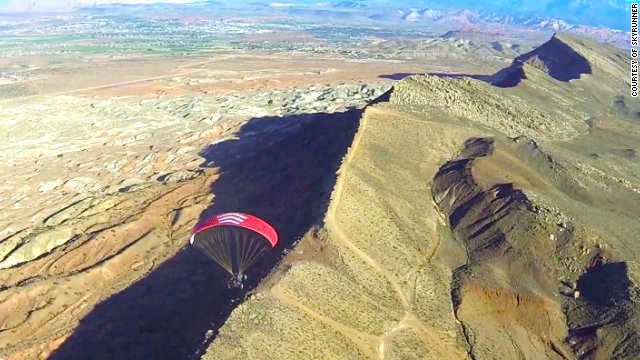 Design takes center stage as an aggressive exterior exposes seamless construction and high-tech materials. The cockpit is decked out with a stylish control panel. 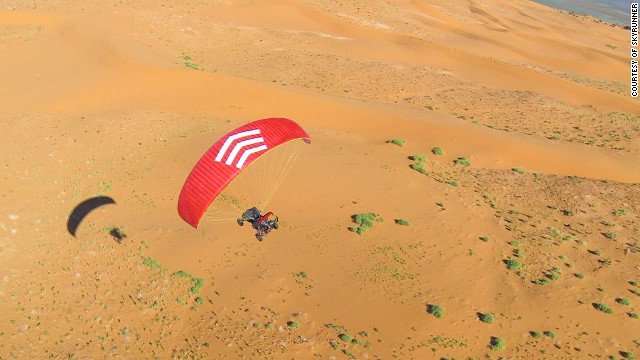 Regulatory procedures will prevent the SkyRunner from really taking off as training and licensing costs still need to be resolved. 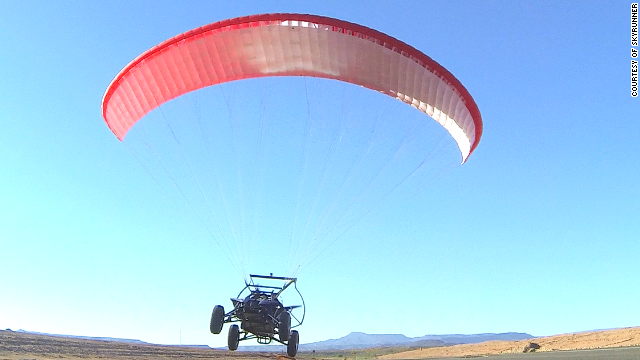 Editor's note: The 49th Farnborough International Airshow takes place in Hampshire, England between 14-20 July 2014. Considered one of the biggest aviation events in the world, CNN will be there talking to all the big industry names.

(CNN) -- To wander the Farnborough airfield during trade show week is to be dwarfed by the big beasts of global aviation, from the epic Dreamliners to the needle-sharp fighter jets, and all for sale.

But with even the cheapest models costing many millions of dollars, is there any prospect that owning an aircraft could follow computers and cars in becoming affordable to the masses?

Commercial aviation in the 21st century

The figures indicate otherwise. Private jet sales slowed to a crawl following the global recession, falling 3.4% to 682 in 2012 in the U.S. and rising just 0.9% the following year.

Even this minor growth has been concentrated at the top end of the market, with sales contracting toward the lower end. Bombardier airline President Eric Martel was candid about the prospect of an upturn, saying Monday: "It's no secret the light segment has been difficult over the last couple of years."

An enthusiast could still fulfill their dream through a fixed kit plane, or a discontinued antique. But looking ahead, their best bet might be the emerging field of the car-plane hybrid.

This week at the Farnborough International Airshow, Parajet is showcasing the SkyRunner to potential aviation distributors with a price tag of $80,000.

The design combines an all-terrain vehicle with a light sport aircraft capable of soaring 15,000 feet at a speed of 55mph, with a flying time of three hours.

Powered by an innovative low-carbon petrol engine, the hybrid is presented as "the next generation of recreational aircraft...designed primarily to make aviation easily accessible and fun."

The vehicle has undergone testing over five years, including a voyage from London to Timbuktu flown by inventor Gilo Cardozo. It builds on the motor design of the company's signature product, a propeller-powered jetpack already established on the market.

Read: Space Tourists to blast off from UK by 2018

Parajet manager Tom Prideaux-Brune believes the new concept is ready and is now being fine tuned for specific markets.

"We have built it and proved it works so now we can take it forward to manufacturing. We can launch when we have the distributors."

Classified as a light aircraft, SkyRunner must overcome regulatory hurdles.

"It's about planning and registering it, so that the authorities know who is operating it and has had sufficient training. The Civil Aviation Authority has been very positive." 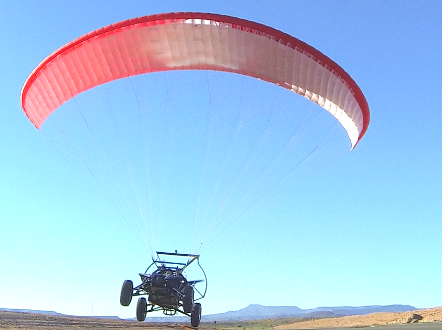 Priced at $80k, this all terrain vehicle can soar up to 15,000 feet in the air with its low carbon petrol engine.
Courtesy of SkyRunner

Once a fantasy only seen in films like "Back to the Future," the 'caroplane' has become an increasingly robust reality in recent years.

The Terrafugia also made its air show debut recently and is set for sales next year. New competitors are also emerging.

The existing market for private planes is "not dynamic or growing", says Charles Alcock, Editor-in-Chief of Aviation International News, suggesting there could be an opportunity for innovators to steal a march, as occurred before the crash.

"A decade earlier we saw new designs that made planes significantly more affordable...very light jets more like sports cars with wings that bought prices down from $75 million to $1 million. It seemed they might take off before the recession."

Alcock highlights that the initial outlay can pale beside other costs such as training, licenses and parking.

He adds that regulations could derail the hybrid models: "You have to go a long way to convince the authorities."

So hardly a cloudless sky. But if the SkyRunner design is not yet cleared for take off, it provides an exciting and plausible glimpse of a future of aircraft ownership we can all aspire to.

Read: What you need to know about Farnborough Airshow 2014

Read: Farnborough airshow through the years

Part of complete coverage on
Farnborough Airshow
Is caroplane the future of travel?
updated 10:26 AM EDT, Thu July 17, 2014

CNN takes a look at the new car-plane hybrid that brings affordable recreational air travel to the masses with hopes of creating alternative market for private aircraft.
And the world's best airline is...
updated 5:36 PM EDT, Wed July 16, 2014

Cathay Pacific was named the world's best airline at an awards ceremony at the Farnborough International Airshow Tuesday.
Meet the pilots who fly vintage
updated 9:24 AM EDT, Mon July 14, 2014

Remarkable vintage aircraft mark 100 years of aviation with The Great War Display Team at Farnborough Airshow this July. Nine of five different types of aircraft from World War I will be on display this year.
Best of Farnborough
updated 8:40 AM EDT, Tue July 8, 2014

For nearly half a century, this small town in Hampshire, England has demonstrated a commitment to groundbreaking plane design with its longtime history of aircraft innovation.
100 years of aviation
updated 4:30 AM EDT, Tue July 8, 2014

Astonishingly, the first ever aircraft took the skies in 1914. Since then, planes have taken on a wealth of gravity deifying forms, from the Flying Boat to the 'SuperJumbo' Jet.
Space tourists could blast off from UK
updated 4:44 PM EDT, Tue July 15, 2014

Britain has stolen a march in the space race with plans for the world's first spaceport outside the U.S., which is hoping to be operational by 2018.
How airline routes shape the world
updated 8:06 AM EDT, Tue July 8, 2014

Airline routes have connected the world in unimaginable ways, however, these paths also indicate the financial climates and emerging markets of the areas they connect.
The airliner that won't quit
updated 10:20 AM EDT, Wed June 4, 2014

The DC-3 airline is known for its sturdy construction, with hundreds in flight 80 years on from its initial take off. Find out why this legendary model remains hugely popular.
Sheikhs on a plane
updated 11:52 PM EST, Mon November 18, 2013

The Middle East is taking hold of the private jet market, showing their love for luxury flight experiences and premium quality design.