The tranquillity of Obama's mind 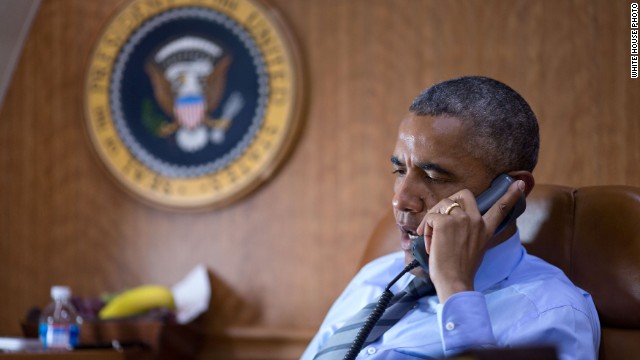 Editor's note: Newt Gingrich is a co-host of CNN's "Crossfire," which airs at 6:30 p.m. ET weekdays, and author of a new book, "Breakout: Pioneers of the Future, Prison Guards of the Past, and the Epic Battle That Will Decide America's Fate." The opinions expressed in this commentary are solely those of the author.

(CNN) -- When White House press secretary Josh Earnest said this week that President Barack Obama had "substantially improved the tranquillity of the global community," many observers reacted with disbelief.

When the President refused to go to the U.S.-Mexico border last week to see the crisis of young people flooding into the United States because "he's not interested in photo ops," lesser mortals noted he had played pool with Colorado Gov. John Hickenlooper, dropped by a brewery to have a beer and shook hands with a man wearing a horse-head mask.

When he went to Delaware on Thursday and opened with a few sentences about the shooting down of a Malaysian airliner in Ukraine before joking about Joe Biden and going back to his prepared text on infrastructure, many thought he had failed to take seriously an international disaster. They were even less impressed when he had lunch at the Charcoal Pit and ordered burgers and fries (not a photo op, of course). It was not until 24 hours later that he took to the podium to promise an aggressive investigation.

With the Islamic State of Iraq and Syria causing the collapse of Iraq and continued violence in Syria, the Syrian dictatorship consolidating its power, the Iranians failing to take steps to end their nuclear weapons program and Hamas firing more than 1,000 rockets at Israel, the President and his team have moved decisively to brief The New York Times on his passion for late-night intellectual dinners exploring physics, architecture and questions far more profound than the fate of the Middle East.

It is as though the more dangerous the world becomes the more Obama hides in a fantasy world of avoiding the responsibilities of the presidency. He uses the office to surround himself with court jesters who distract him in an enlightened and noble way from the growing failures of his policies and the rapidly expanding threats to the civilized world.

Finally, as Russian President Vladimir Putin continues to flex his muscles and expand his policies, there is a psychologically bizarre pattern of the President's staff referring to Obama as "the Bear."

The President refers to himself when he asserts "the Bear is loose." Of course with a President who last week used "I", "my" or "mine" 207 times in one speech, the concept is beyond bizarre. The White House staff, thinking somehow that this was clever, promptly turned the phrase into a Twitter hashtag, #TheBearIsLoose.

Obama's idea of a loose bear is an unplanned walk to a Starbucks near the White House. Putin's idea of a loose bear is stealing Crimea. Obama's idea of risk-taking is shooting pool with a Democratic governor. Putin's idea of risk-taking is handing out anti-aircraft missiles to rebels in Ukraine. Putin's actions remind us of a time when America was threatened by a real metaphorical bear, as a 1984 Reagan campaign ad referred to the Soviet Union.

The self-image of Obama as a bear is so delusional that it brings into question the degree to which he is simply out of touch with reality.

Which brings us back to Earnest's quote about tranquillity in the international community.

From his perch in the amazingly Obama-centric world in which our President lives, look again at what the rest of us think of as serious problems.

Have any of the 1,000-plus Hamas rockets been aimed at Obama? No. That is why Obama is tranquil.

Have any of the thousands who are crossing the border tried to move into the White House? No. That is why Obama is tranquil.

Is ISIS an immediate threat to the United States that is likely to blow up the next golf course the President is playing at? No. That is why Obama is tranquil.

If you can reduce your presidency to a Starbucks visit, a man with a horse-head mask, shooting pool and visiting Joe Biden's burger joint for lunch, you can have a successful presidency as you have defined it, even if the world is disintegrating.

The President's detachment from reality is fast infecting the rest of his party. How else can we explain fellow Democrat and Senate Majority Leader Harry Reid stating this week that "the border is secure"?

This "tranquillity" line was a Freudian slip by the President's spokesman that reveals the deep gap between reality and the Obama White House.

Obama is rapidly becoming the weakest president since James Buchanan failed to stop the drift toward Civil War.

Self-delusion and a rich fantasy life are dangerous in a president. They often lead to disasters that are unimaginable until they happen.

That is what we have to worry about for the next two years until he leaves public office for a private fantasyland.