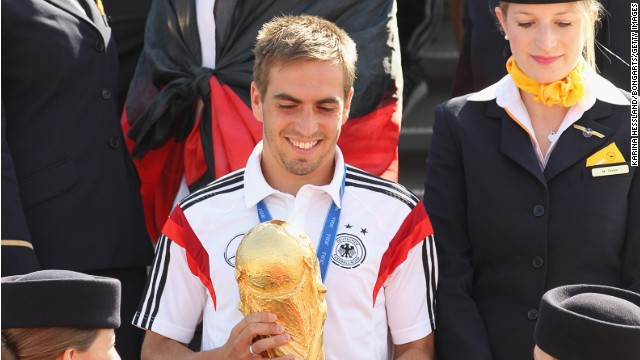 (CNN) -- He may have written his name into national folklore less than a week ago but Germany's World Cup winning captain Philipp Lahm has decided to go out at the top by announcing his retirement from international football Friday.

The 30-year-old made 113 appearances for "Die Nationalmannschaft" over 10 years culminating in Sunday's dramatic extra-time victory over Argentina in the Maracana, Rio de Janeiro.

Lahm will continue to play for club side Bayern Munich with whom he extended his contract prior to the tournament in Brazil.

He informed Germany coach Joachim Low of his decision on Monday over breakfast.

"I am happy and grateful that the end of my career end with the national team coincides with winning the World Cup in Brazil," he said.

The surprise news was met with tributes from across the sporting world and beyond.

Lahm was at the center of celebrations as Germany paraded the World Cup trophy to an estimated one million people on the streets of Berlin Monday.

Germany coach Joachim Low said: "Philipp is a model professional who puts the team's success above everything else."

"His intelligence and versatility as a player have allowed him to play at the highest level on the international stage for many years.

"He is a world-class player, as he again demonstrated over the last few weeks in Brazil. He crowned his outstanding career by winning the World Cup title."

"He is a big personality and happily takes on a great deal of responsibility.

"I have immense respect for Philipp's career and his decision. What remains is for all of us to say a big thank you."

German Chancellor Angela #Merkel: "I would like to say how much I respect what #Lahm has done for the national team." pic.twitter.com/IQyK7AmaCm

Meanwhile German chancellor Angela Merkel, who was pictured celebrating with the German team after their victory in Brazil, said "I would like to express to him my utmost respect for what he has done for the national team."

Lahm made his debut for Germany in a 2-1 victory over Croatia in February 2004 and became German captain prior to the 2010 World Cup after injury to then captain Michael Ballack.

Traditionally a right sided defender, Lahm has been deployed more often as a central midfielder by Bayern and Germany over the past season.

This was a role he played in the early games of the 2014 World Cup before reverting to right back after injury to Shkodran Mustafi.