Are Rolls-Royce's 'robo-ships' the future of seafaring? 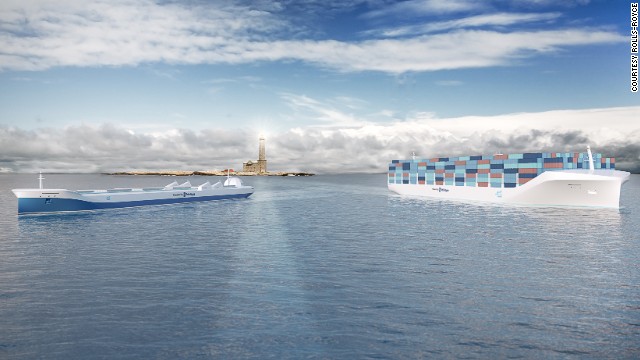 At first glance, these might appear to be two unremarkable cargo vessels. With one remarkable exception... 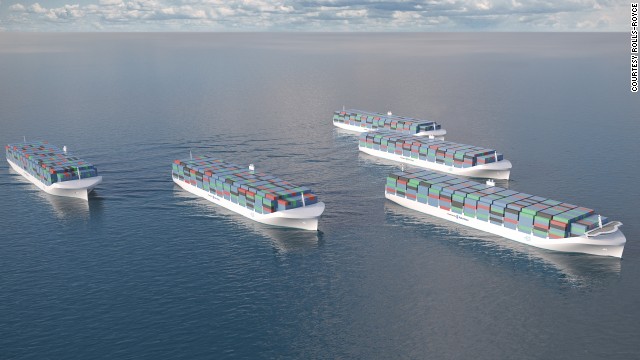 Engineering company Rolls-Royce has unveiled designs for unmanned cargo ships. The streamlined vessels would be operated by remote control onshore, requiring around 10 captains per 100 boats. 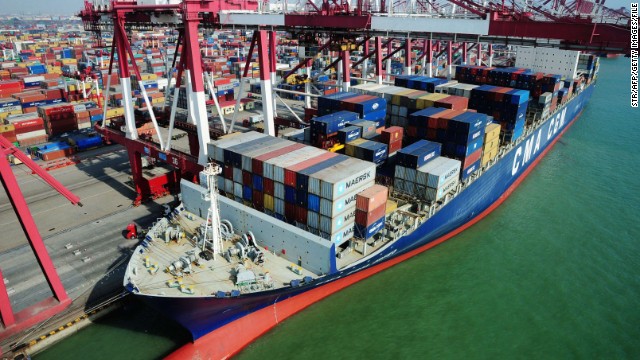 Rolls-Royce predicts unmanned cargo ships could be sailing our seas within the next decade. But this would depend on approval from maritime regulators. 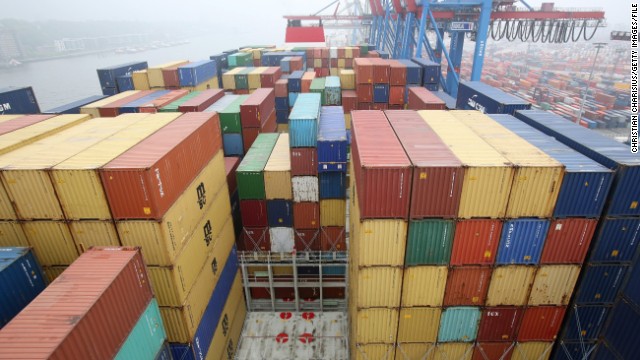 Without the need for crew accommodation, vessels would have more space for cargo and use less fuel, says Oskar Levander, Rolls Royce's vice-president of innovation, engineering and technology. 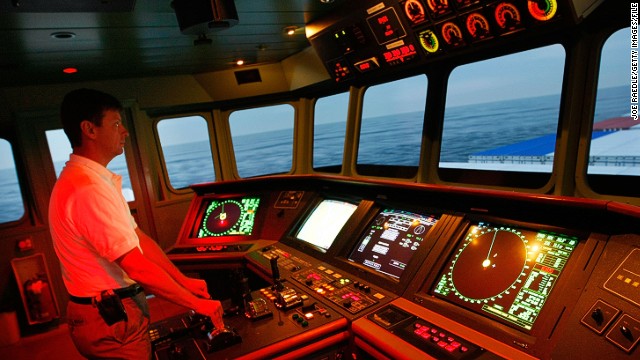 But what happens when technology fails, asks Simon Bennett of the International Chamber of Shipping? "It's important for seafarers to have celestial navigation, getting out their sextants or looking at the moon to work out where they are," he said. 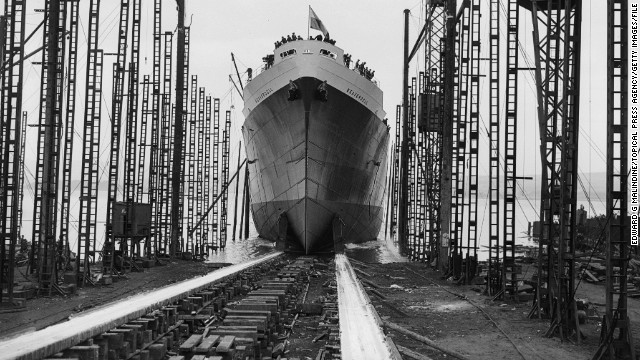 Cargo ships have come a long way from this hulking vessel, pictured easing down a slipway in Glasgow, Scotland, in 1945. "If you go maybe 150 years back, a normal cargo vessel had about 250 crew. And it's been reducing ever since -- now we are down to 12 or 15," said Levander. 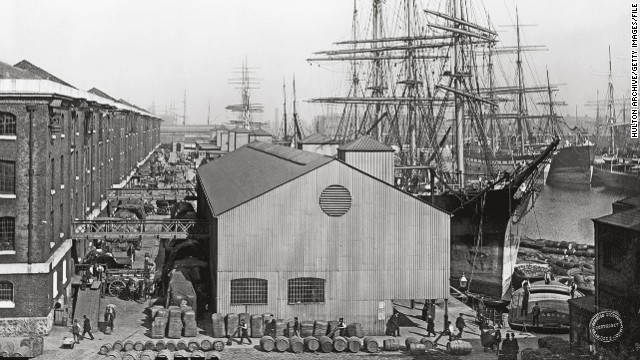 Long gone are the days of wooden merchant vessels, like this one pictured in London in 1893. "No-one is completely dismissing the idea of unmanned ships at some point in the future," said Bennett. "But I say that in the same way that no-one dismisses the idea that robots will be running society at some point in the future."
HIDE CAPTION
Meet the 'ghost ships'
Futuristic fleet
Shipping shake-up
Ship shape
Old school sailors
Full steam ahead
Sail away
<<
<

(CNN) -- Ship captains of the future won't be salty sea dogs with their hand at the helm, and the ocean at their feet.

They won't even step on-board a boat, if revolutionary new technology is given the green light.

As Google unveils its driverless car, and Amazon tests out drones delivering goods to our door, could the high seas be the next frontier for robotic transport?

Crewless cargo ships, operated by remote control, could be sailing our globe within the next decade says luxury engineering company Rolls-Royce.

"The time is ripe for a fundamental change in shipping," insisted its vice-president of innovation, engineering and technology, Oskar Levander, while unveiling new concept boat designs.

"Camera technology can be far superior than the human eye when it's dark, or foggy, or raining," he said, speaking from his office in Norway.

But not everyone is so quick to jump on board.

"There's an argument that if you have too much technology, there's a tendency for human beings and seafarers to look at their screens rather than out their window," said Simon Bennett of the International Chamber of Shipping, in London.

"So your systems are telling you there's an iceberg a couple of miles away. But actually, if you looked out the window you'd realize you're about to smash into it." 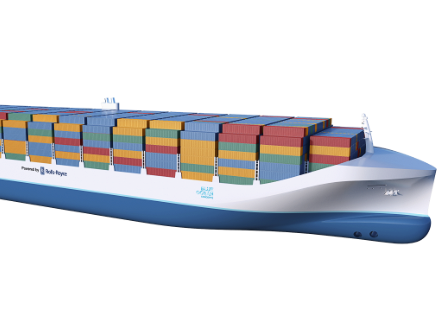 The technology might be available now, but whether it'll actually make it onto our oceans will be down to maritime regulators -- a scenario Bennett dismisses as "very unlikely in the short-term future."

Could engineering company Rolls Royce -- which makes engines for airliners and military aircraft, and power systems for ships -- be the one to bring a change of tide?

In this futuristic vision of seafaring, captains would be relocated to onshore control centers, using real-time cameras to maneuver a fleet of ships.

Centuries after wooden boats with billowing sails and hundreds of crew navigated the world's trade routes, could we soon see 10 captains operating 100 ships by remote control, as imagined by Levander?

Is the modern J Class still a classic?

"And the question is why would it stop now?"

"We make the ship lighter, distribute the weight better, and take off these consumers of energy," he explained.

"One of these standard ships transporting iron ore could save about 15% in fuel on an annual basis, if it was unmanned."

Would sailors also be pleased with the new working arrangement? Bennett is skeptical.

"The unions would have something to say about the de-manning of ships," he said. "Technology has its role in complimenting the competency of seafarers, but there's a balance to be had.

"A lot of people now are reliant on the GPS systems in their car -- but what happens when the systems go down? It's important then for seafarers to have celestial navigation, getting out their sextants or looking at the moon to work out where they are."

These days, captains are more likely to have their head down in paperwork, rather than gazing up at the stars, says Levander. 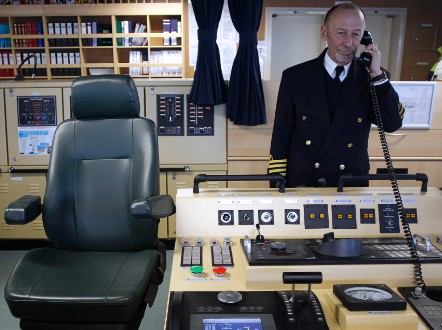 The cargo ship captain of today is a very different creature from a century ago.
Getty Images

"If you look at the captain today, he is highly trained, and he's been educated on how to operate the ship in difficult situations, and maneuvering in ports, and so on. But what does he really do? It's probably less than 5% of his time that he's spending on really maneuvering the ship.

"Most of his time today is spent on paperwork, administration and bureaucracy."

And if this high-tech computer system did lose contact with ground control?

"It will be programmed to automatically go into safe mode," explained Levander. "It will still float, it's still there."

With cargo ships carrying 90% of the world's trade goods, is it really safe to have them on the open ocean without anyone at the helm?

The crew on-board, they don't get enough rest, they're tired, they're not concentrating on the task ahead
Oskar Levander, Rolls-Royce vice president of innovation, engineering and technology

"If you look at the incidents happening in shipping today, most of them are related to human factors," said Levander.

"The crew on board, they don't get enough rest, they're tired, they're not concentrating on the task ahead. And by moving the navigation onshore, we can have a better working environment -- people are not out there in a rolling, and heaving, and pitching environment."

Without any crew on ships, there would also be less incentive for pirates to attack, says Levander: "If they don't have hostages, it's much easier for the navy to come in and take the ship back."

Rolls-Royce may have floated the idea of robo-ships. Whether it sinks or swims is another matter.

Read: Yachting to the ends of the Earth

Inspire: Living on a houseboat