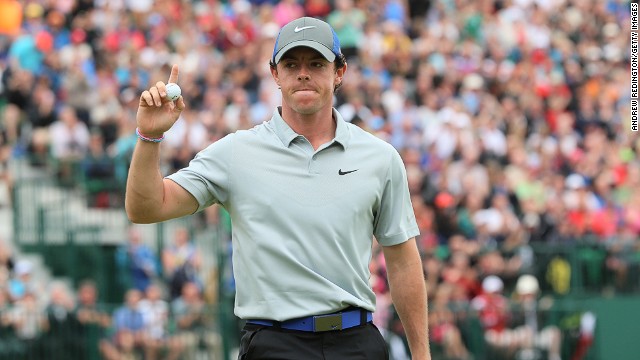 Rory McIlroy extended his lead to six shots on Saturday. The Northern Irishman shot a four-under par 68 to finish on 16-under par with 18 holes remaining. 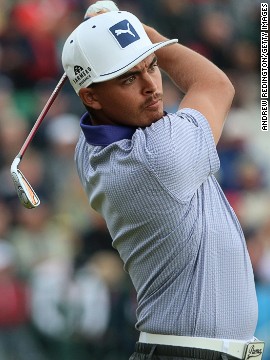 Rickie Fowler will be paired with McIlroy in the final round after claiming second outright on Saturday. The American's round included eight birdies and four bogeys. 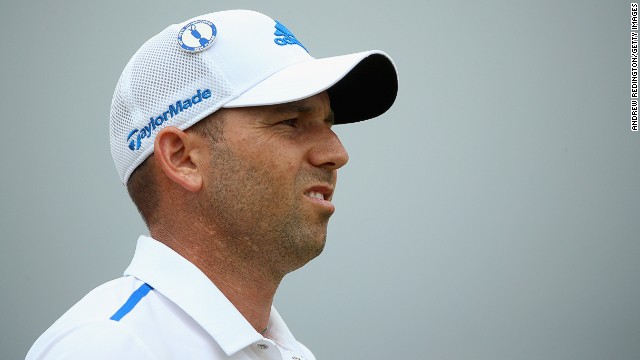 Sergio Garcia is also in contention again at the Open Championship but may have too much to do on Sunday. The Spaniard's third round 69 leaves him on nine-under par. 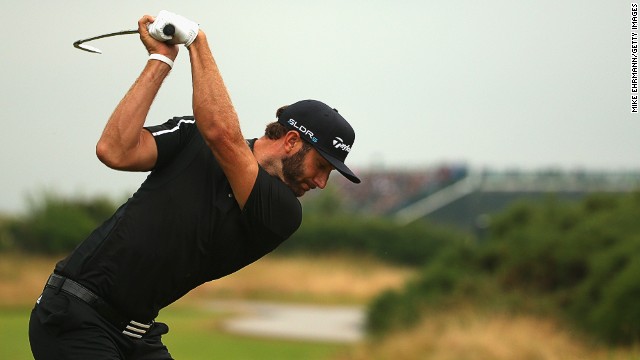 Like Garcia, Dustin Johnson could be ready to capitalize if McIlroy falters on Sunday. The powerful American is tied for third with the Spaniard on nine-under par. 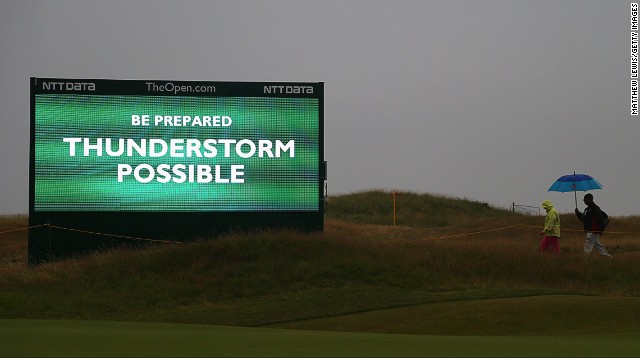 On a day when the weather finally bared its teeth at Royal Liverpool, so did the Northern Irishman.

At one stage of this historic championship round -- with two tees in operation for the first time ever -- another dynamic 25-year-old threatened the fairytale Merseyside had been dreaming of.

Rickie Fowler tied McIlroy for the lead as the two-time major champion toiled amid the thick and unforgiving rough of Hoylake's 12th hole.

But that seemed the catalyst for the home favorite to turn on the afterburners, as two eagles on his final three holes wrested the famed Claret Jug ever closer to his clubhouse locker.

The roar that followed his three on the final green was of the pitch one expects to greet the winning putt.

It may well prove to be the telling blow.

A six-shot lead going into a final round that should see a return to the benign weather of the first two days means a third major of McIlroy's fledgling career is within touching distance.

Fowler's only hope is to recapture the furious pace he set early on Saturday. Seven birdies drew him level with McIlroy before three bogeys halted a gallant charge.

He will make up a final group with a combined age 14 years junior to that of five-time Open champion Tom Watson, who sits on five-over for the tournament.

Spain's Sergio Garcia and Dustin Johnson, from America, both lie on nine-under with Frenchman Victor Dubuisson a further shot behind.

But McIlroy is in such form it'd take a return to the dark days of his Augusta meltdown in 2011 to derail his procession towards Hoylake's honors board, and entry to an exclusive club.

Only Jack Nicklaus and Tiger Woods managed to win three majors in the modern era by the age of 25.

By Sunday night, McIlroy could have 75% of a career grand slam sewn up and make that twosome a supremely talented hat-trick.

"I never thought I'd be able to be in this position," McIlroy told reporters as torrential rain crashed down on the media centre roof, justifying the decision to send the players out early.

"Not a lot of people have achieved a career grand slam and if everything goes the right way tomorrow, to get to three-quarters of the way there is some achievement by the age of 25.

"I'd be in pretty illustrious company, I don't want to get ahead of ourselves but it would mean an awful lot. First things first, play a good solid round tomorrow and if that means I'm going to Augusta with a bit of hype then so be it."

It was fitting that a biblical downpour erupted just as McIlroy filed in to face the gathered press, for Hoylake has proved something of a perfect storm for him.

Intent on improving his record in golf's oldest major, McIlroy spent the weeks leading up to the tournament shaping his game on the links courses of his native Northern Ireland.

It has made quite a difference.

The 25-year-old has arrested a decline that saw finishes of 25th, 60th and 116th in the last three years and now sits one solid round away from landing his first Open title.

With savage thunderstorms sweeping northwards, the R&A decided to operate two starting tees for the first time in the tournament's history, sending groups of three out from 9am.

Best call ever from the R&A to play early @The_Open because of weather, well done! @McIlroyRory is on a roll but we'll try to give him a run

This meant after a twilight finish on Friday, McIlroy barely had time to hit the gym and watch a movie, as he has done after both rounds so far, before he was due back at the course.

A bogey on the first, coupled with playing partner Dustin Johnson's birdie, saw his four-shot lead chopped in half immediately.

I'd be in pretty illustrious company, I don't want to get ahead of ourselves but it would mean an awful lot.
Rory McIlroy

He canceled out that error with a birdie on the fifth but seemed more content to protect his lead than exert himself to extend it.

Fowler was the opposite.

In weather that would make most Californians recoil in horror, the 25-year-old reveled in the hanging cloud and spitting rain that swept across the Wirral Peninsula.

He recorded four birdies in six holes to close the gap on McIlroy, with Garcia fighting to keep pace in the same group.

Another birdie on 12 took Fowler to 12-under and when McIlroy missed a short par putt on the same green not 15 minutes later, the Open had joint-leaders.

#ICYMI Rory's approach to 18 and the eagle putt that put him six shots in front heading into Sunday at #TheOpen. http://t.co/Ww3M7Yw5Uu

If McIlroy was in any way perturbed, he didn't show it. In fact, he seemed to welcome the challenge.

The contours of this strip of land on the west coast mean its predators are forever catching glimpses of each other.

A huge gallery gathered around the 15th hole speculated as to whether the clamor back on the 14th meant McIlroy had made a birdie.

I was conscious that Rickie was getting closer but I never panicked and stayed patient.
Rory McIlroy

Seconds later, the huge scoreboard to the right of the green confirmed he had. That fleeting Fowler share had now become a two-shot deficit.

McIlroy refused to relinquish his grasp on his rival's throat.

A booming drive down the 16th and perfectly flighted approach offered an eagle chance which was duly swallowed whole.

By this stage, Fowler had bogeyed three holes out of four -- his round of 68 would include eight birdies and four bogeys in total.

Despite dropping a shot on the 17th, a ferocious McIlroy drive on the 18th was complemented by a five iron that landed barely 10 feet from the hole.

The putt held its line and disappeared. McIlroy fist-pumped as thousands flanking the final hole rose to their feet.

"The support this week has been fantastic," he added. "It's a pleasure to play in front of crowd like this.

Here are the tee times for Sunday at The 143rd Open Championship. #TheOpen http://t.co/kMz4svJw5W pic.twitter.com/ZnD5qyYPMw

"Walking onto the 18th green today I got goose bumps -- how loud it was, how much I support I felt from them.

"I said yesterday I want to try and give them something to cheer for and I'll try and do the same thing tomorrow.

"I was conscious that Rickie was getting closer but I never panicked and stayed patient. It was nice to come up with the goods when I needed them.

The support this week has been fantastic. It's a pleasure to play in front of crowd like this.
Rory McIlroy

"I felt like those two shots on 18 deserved an eagle."

Barring a meltdown of similar proportions to the one McIlroy suffered at The Masters in 2011, when he blew a four-shot lead in the final round, the title is his.

But having stormed from seven shots back to win the PGA Championship at Wentworth in May, McIlroy knows how quickly a lead can evaporate.

"I wanted to try and be as far ahead as I could, that's why I was grinding over that putt at the last," he explained.

"Whenever you have such a big lead you really can't think anyone else but yourself."

Few people around Hoylake tomorrow will be thinking of anyone else either.