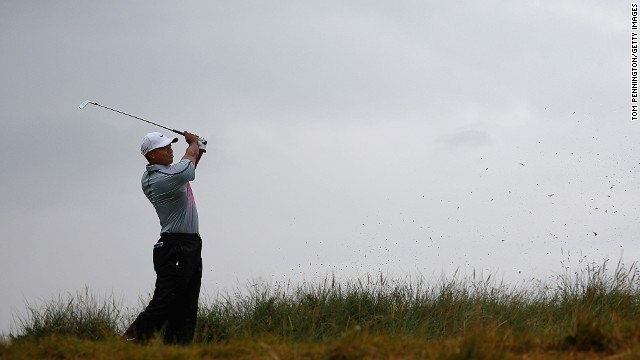 Tiger Woods struggled with consistency again during the third round of the Open Championship at Hoylake.
STORY HIGHLIGHTS

(CNN) -- Tiger Woods was kissing the Claret Jug at Hoylake eight years ago but there was to be no fairytale return to the Royal Liverpool Golf Club for the former world No. 1 this week.

Any lingering hopes that Woods could mount a challenge at the scene of his third and last Open Championship triumph in 2006 finally ended on Saturday with a one-over par third round of 73.

Starting at the 10th hole -- threats of thunderstorms had forced organizers to adopt a two-tee start on Saturday -- Woods got off to a bright start on a dank day on England's northwest coast picking up two shots on his opening two holes.

A further birdie and bogey saw him reach the turn at two under for the round (level par for the tournament) before a birdie at the first (his 10th hole) suggested he may still scrap his way back into contention.

But birdies quickly turned to bogeys -- a double bogey at the next hole was followed by a triple five holes later.

A birdie two at the final hole was no consolation as Woods found himself three-over par after 54 holes, 19 shots off the lead held by Rory McIlroy.

Mounting a serious challenge was perhaps a bit much to ask of the 38-year-old who only returned to competitive action at the end of June following a three-month lay-off -- Woods underwent back surgery at the end of March.

A missed cut at his comeback tournament -- the Congressional -- didn't bode well for his chances at Hoylake and so it has proved with Woods conceding that it's perhaps come a little early.

"I'm starting to get the flow of the round, the flow of playing again," Woods told reporters.

"But still I've just made too many mistakes. You can't run up high scores like that and expect to contend, especially when the conditions are this benign," Woods added.

"I've made two doubles and two triples (in three rounds). But on top of that, I missed a lot of shots for opportunities for birdies, and consequently, I'm three-over par."

The game maybe up for Woods at another major championship (25 and counting since his U.S. Open triumph in 2008), but the 14-time major winner will perhaps be back in the swing of things next month at the final major of the season, the U.S. PGA Championship.

Like Hoylake, the venue, Valhalla Golf Club, holds happy major memories -- he won the 2000 U.S. PGA Championship at the Kentucky course. Woods will be looking for a better return when the tournament gets underway on August 7.