Hoylake (CNN) -- Rory McIlroy had won two majors before Sunday, but none in front of his dear old mum.

No wonder then that Rosie and her 25-year-old sank into tears as he walked off the 18th green at Hoylake as the new British Open champion.

A third major title of his fledgling career means the Northern Irishman is just a green jacket away from a career grand slam.

But McIlroy's mum is just relieved the jinx she perceived to be preventing him from winning one in front of her evaporated in a blanket of cloud on Merseyside. 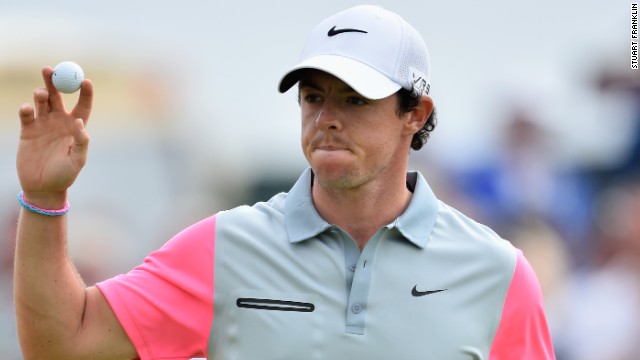 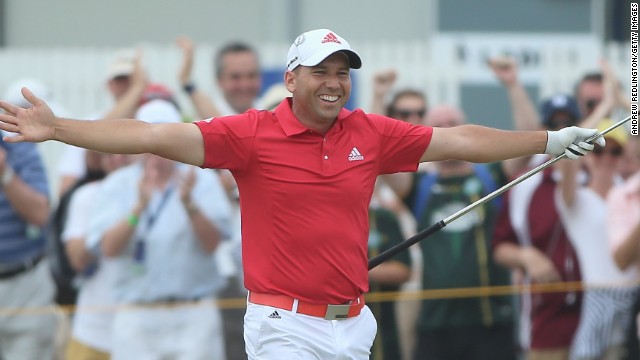 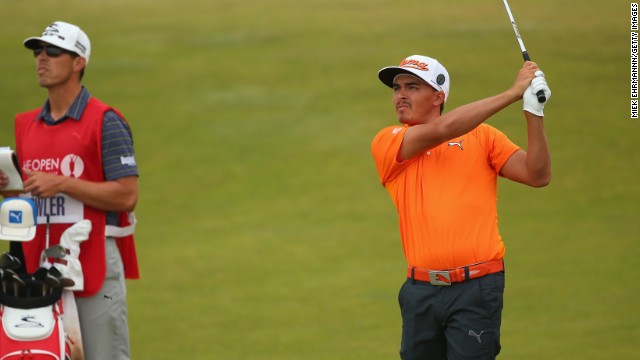 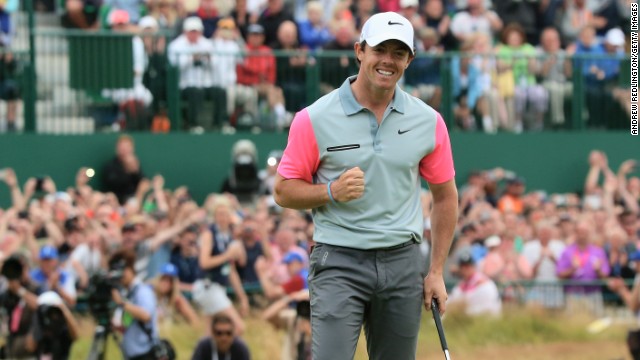 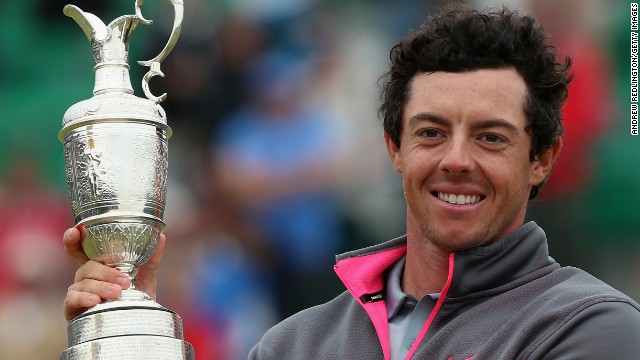 "There was high emotion on the 18th, there really was," McIlroy told CNN from Hoylake's clubhouse, as jubilant members in the adjacent room chanted his name.

"My mum, she hadn't been to the previous two majors that I won, and it was incredible the first person that greeted me coming off the 18th was her.

"It was really a nice moment, she was crying her eyes out and I was trying to hold back the tears -- I think a few tears definitely came out.

"It was a very special moment and to be able to share these moments with your parents -- especially parents like I have -- they're two of my best friends.

"I can talk to them about anything. They've been there for me through thick and thin and its great to share these moments with them."

In the 2011 U.S. Open at Congressional and the following year's U.S. PGA Championship at Kiawah Island he eviscerated the field, winning both by a scarcely believable margin of eight shots.

At Hoylake he had to graft.

Leading by six shots prior to the final round he saw that shaved down to just two with a handful of holes left as Spain's Sergio Garcia, a friend and Ryder Cup buddy, hounded him doggedly.

But his links game, tweaked and perfected on the courses of his native Northern Ireland in the weeks leading up to the tournament, remained steadfast.

Despite shooting the worst score of any of the top 13 players on the final day, that cushion he'd compiled over previous days smoothed his way to glory.

So how does this one rank?

"Winning The Open, the home major for guys like myself, it's a very special championship and I'm so very honored to have won it," he explained.

"Kiawah was coming off a bit of a slump in form but still having a good year. It was almost, not expected, but I felt like in 2012 the only thing I really needed was to win a major and I did.

"Again this feels a bit more like the first one at Congressional where I maybe had to silence a few doubters about how I played links golf, how can I handle a lead, how do I play well on a Friday.

"It's been a difficult 18 months at times since the start of 2013 and obviously winning the Claret Jug makes it all worthwhile."

By landing the Claret Jug, into which McIlroy revealed some top quality red wine might go, he has three of the four major titles on offer.

The one that continues to evade him is the U.S Masters, a tournament that evokes harrowing memories.

In 2011, as a 21-year-old, McIlroy led by four shots going into the final round, and disintegrated on the back nine, eventually finishing in a tie for 15th.

But he'll return to Augusta with three pillars of a slam completed, and the chance to become the first European ever to clinch one.

At just 25, McIlroy has years ahead of him to secure entry into elite band of six who have won all four majors.

But he's aiming to do it at the first attempt.

"I'd love to, especially going to Augusta now with three legs of the career grand slam under my belt and only having the green jacket to win," he said.

"I'll be going with a lot of motivation, I'll do everything I can to prepare the best way I can because it'll be a great chance for me to put that little milestone in my career to bed and go forward.

"Before that there's still the PGA Championship to play at Valhalla and I want to try to do my best there but going to Augusta next April is going to be a lot of fun."

That his Open triumph came at Hoylake, in front of passionate and enthusiastic fans from Merseyside and those who had traveled across from Ireland, was fitting.

He lost in the opening round of the boys championship in 2003 but retained an affinity for these links that are tightly wedged into a small corner of the Wirral Peninsula.

It is an affinity that will last a lifetime after this week.

"When I came back here a couple of weeks ago I couldn't remember all of the course -- obviously it looked much different with the grandstands and everything.

"It's a great golf course, a very fair golf course I feel, and if you play well you are rewarded. If you don't hit it so well you can put yourself in spots that make it very difficult for yourself.

"Hoylake is a course that I obviously love now but even when I got here a couple of weeks ago it was a course I felt I could do well on."

McIlroy's British Open career had been in decline before this triumph.

After winning the low amateur medal in 2007, he finished third at St Andrew's in 2010. He led after the opening round and shot 80 the following day before steadying over the weekend.

The following year at Royal St George's he struck an stroppy note when claiming the oldest major was too reliant on weather conditions and that he wasn't prepared to change his game "for one week a year."

In 2012 he finished 60th and last year at Muirfield he didn't even make the cut, a moment he acknowledged as one of his lowest in recent times at his winner's press conference.

But a period of practice on links courses and in links conditions back in Northern Ireland prior to landing at Liverpool have recalibrated his game in triumphant fashion.

"I think you need experiences like the one in 2010, having the first round lead and losing it," he said.

"OK, I came back and finished third but you need experiences like that to move forward and to learn from.

"I just needed something to click and luckily everything clicked this week."