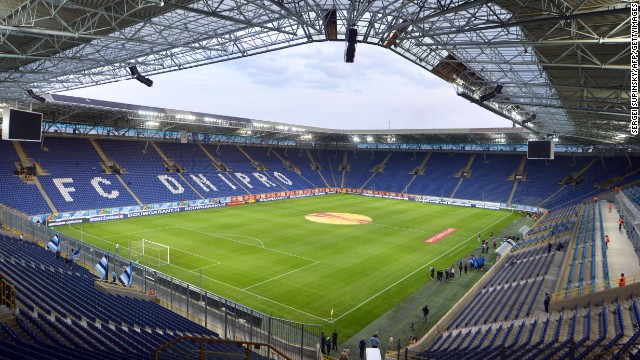 (CNN) -- Danish football club FC Copenhagen has been left in limbo ahead of its European Champions League game at Dnipro Dnipropetrovsk due to the current conflict in Ukraine.

Copenhagen is due to face the Ukrainian side on July 29 in the city of Dnipropetrovsk to contest the first leg of the competition's third qualifying round.

However, following the Malaysia Airlines Flight 17 crash last week and the ongoing unrest in Ukraine, the Danish club does not know if it will be able to travel by plane for the game or even find a company to insure it for the trip.

"We are waiting," Copenhagen head of press and communications Christian Wolny told CNN. "There are some issues right now that we need to get sorted.

"There is no way our travel agent can find any company that will fly us to Ukraine.

"It's currently a serious risk to fly over Ukraine, so many, many companies have removed their route to the country. We cannot get there by flight.

"Furthermore, the Danish foreign ministry has labeled the region as being unstable, which means they do not tell us not to go there, but it is not stable. They cannot guarantee what the situation will be in nine days [for the match].

"The last point is our insurance company, they do not cover us in the eastern part of Ukraine, where Dnipropetrovsk is.

"We need to get these three issues solved, and we have made UEFA aware of the situation."

Prior to the Malaysia Airlines Flight 17 crash, UEFA's Emergency Panel decided its European club competition matches involving Ukrainian clubs would be allowed to take place in Dnipropetrovsk and Odessa, in addition to Kiev and Lviv.

UEFA has yet to confirm if Copenhagen's trip to Dnipro will go ahead, or if it will be played in another venue.

Ukrainian champion Shakhtar Donetsk is currently unable to play matches at its Donbass Arena stadium due to the conflict in the city of Donetsk.

"For us we have no problem with FC Dnipro as a club, or the city that they play in," Wolny added.

"We are not experts, we have to rely on what UEFA tells us."

Copenhagen and Dnipro are vying for a place in the Champions League playoffs, which would then leave one of the clubs two games away from a spot in the group stage of the competition.

"We are preparing as much as we can. But usually at this point normally, for a match of this importance, we have everything ready by now," Wolny said.

"All the details -- transfer plans for players and staff, where to stay, where to eat, everything that would give us the best possible chance of performing on the pitch.

"But right now we don't even know if we can get there. We are trying to prepare as best as we can, but it is not the ideal way to prepare for a game of this importance."