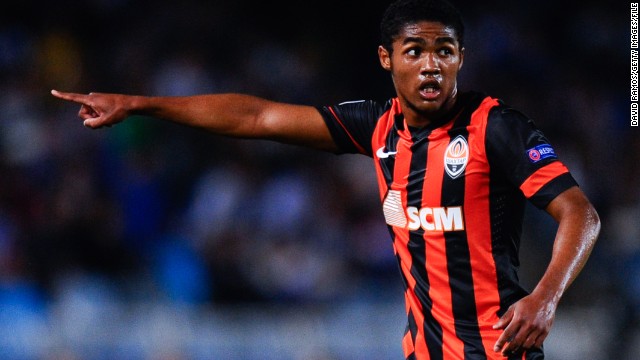 Brazilian Douglas Costa is one of six footballers refusing to return to Ukraine.
STORY HIGHLIGHTS

(CNN) -- The president of Ukraine's top football club has warned six of its players who have gone AWOL they will "suffer" if they don't return to the conflict-torn country.

Shakhtar Donetsk had played a friendly against Lyon on Saturday, but after the game five Brazilians and one Argentine remained in France rather than travel back to Ukraine. On Monday there was fighting in the eastern Ukrainian city of Donetsk.

"I don't rule out that these players will return to the team quickly, and some of them -- tomorrow," Shakhtar president Rinat Akhmetov told the club's official website.

"Players have contracts that they have to abide by. If they do not come, I think, they will be the first to suffer. Each of them has a minimum release clause, which is tens of millions of euros.

"If someone wants to reduce this amount by a million, then such a decision is our right."

Akhmetov also assured Brazilians Douglas Costa, Fred, Dentinho, Alex Teixiera, Ismaily and Facundo Ferreyra of Argentina they have "nothing to fear" if and when they return to Ukraine.

"Hopefully, the mind and heart will prevail over misunderstanding, and the players will not follow temptation and fear," said the Shakhtar president.

"We are ready to provide security. We will not take risks and in any case we won't bring players to dangerous places."

"Despite the fact that we will be weakened in the Super Cup match against Dynamo Kyiv, our players will do their best to make the game hard for our opponents," added Akhmetov.

The ongoing unrest in the region means Shakhtar, the reigning Ukrainian champion, is unable to play matches at its Donbass Arena stadium.

The Ukrainian football season is due to start this weekend, with Shakhtar scheduled to host Metalurh Zaporizhya.

It is unclear where the match will be played, although Akhmetov would like it to take place in Kharkiv, a city over 150 miles north of Donetsk.

"We want to play in Donetsk very much, but, unfortunately, at the moment we cannot do it.

"The decision regarding the championship is taken by the Ukrainian Football Federation. Through our game, we will call for peace and try to bring joy to our fans."

How did Brazil handle the World Cup?

Of the six AWOL players, playmaker Douglas Costa is arguably the most valuable.

The 23-year-old has previously been linked with Manchester United, but Akhmetov ruled out a "clearance sale."

Prior to the Malaysia Airlines Flight 17 crash last weeks, European governing body UEFA's Emergency Panel decided its European club competition matches involving Ukrainian clubs would be allowed to take place in Dnipropetrovsk and Odessa, in addition to Kiev and Lviv.

Dnipro Dnipropetrovsk will play in the third qualifying round of the UEFA Champions League while Chornomorets Odessa are in the Europa League.

UEFA's Emergency Panel also ruled Ukrainian and Russian teams cannot be drawn against each other in its competitions.

That ensured Dnipro were not drawn against Russian club Zenit St Petersburg when the UEFA Champions League third qualifying round draw was made last week.