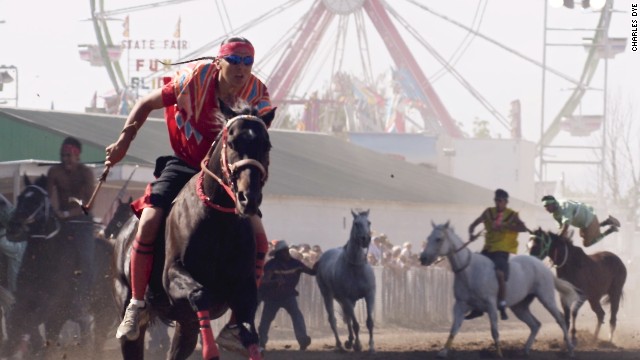 Fast and frenetic, Indian Relay is a sport in which riders, including Jon Marc (pictured,) compete for pride and prize money, with no saddles or race helmets. 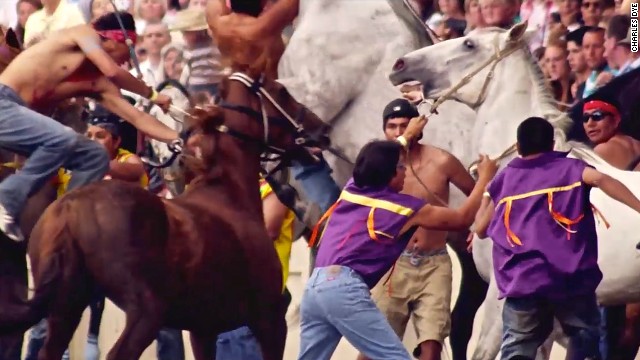 To the untrained eye, it can look like sheer unmitigated chaos as changeovers of horses take place every lap during a three-lap race. 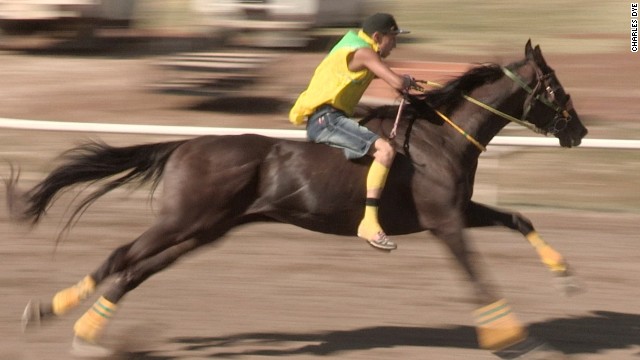 Speed and horsemanship are essential as riders like Zack Rock (pictured) go hell for leather in a bid to cross the line in first place. 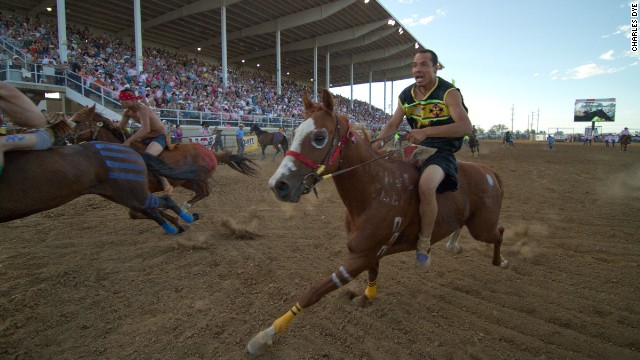 The stands are packed in areas across Idaho and Montana for many of the events on the calendar. 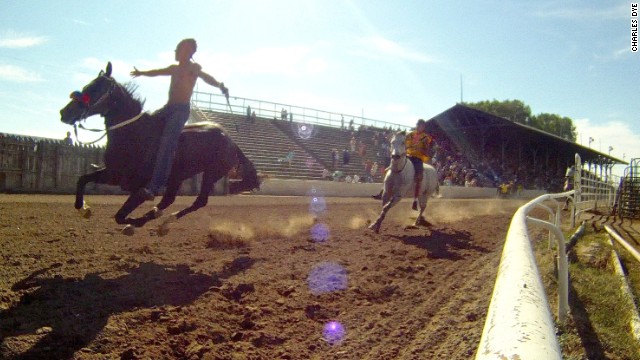 According to those immersed in the sport, horses are a key part of what makes the tribes tick.
HIDE CAPTION
Indian Relay
Crazy horses
Life in the fast lane
Crowd pleasers
Cultural roots
<<
<

Little-known outside the tribes of the Rocky Mountains in the northwest, it's a "magical" mix of horse racing, track-and-field relay and the all-action adrenalin of rodeo.

Each race is battled out by up to six jockeys over three laps of a track -- and the riders have to change horses every lap.

With handlers for each horse, it creates a melee of 18 horses and 24 people. It is pure, unadulterated and unpredictable chaos.

To add a further twist, they don't use saddles or helmets, and the danger element adds to the "rock star" esteem in which the jockeys are held by their communities.

Kendall Old Horn has been involved in the sport for 37 years -- first as a rider back in 1978 and now as a team owner after returning after 21 years away, following a five-year stint in the Marine Corps.

"I don't know how to sell the sport but what I do know is that it's a fast-paced, high-action sport," he explains. "The adrenalin rush is the biggest buzz you can imagine.

What California Chrome will see

"You can't beat that feeling, there's nothing like it. It's better than any high that you can experience, if you'd done anything like that. For me, it's America's best-kept secret as a sport."

Horses are a way of life for the Native American tribes of Montana, where Old Horn is based.

"I've been around horses from the day I hit the ground," he says. Horses are very therapeutic. They take away the everyday stresses of life.

"I was away from Indian Relay for 21 years but I was never away from horses. They're a part of me."

The Blackfoot Nation is a Native American territory in Montana.

"It's the spirit of the animals and the spirit of the people coming together. But what amazes me is the effect it has on the spectators as well," explains Murray, whose son used to race and whose grandson is now entering the sport as a rider.

"You see the faces of the families watching and it's understandable how excited they are supporting their family members or their teams. But you look across the crowds at races and everyone's just so involved. It's a magical sport."

Murray has helped it gain slightly wider acclaim after being introduced to American filmmaker Charles Dye, who last year released a documentary called "Indian Relay." It takes an in-depth look at the sport and the characters within it, including Murray and Old Horn.

The project was a labor of love for Dye, who spent the first of the four years it took to complete trying to gain the trust of the communities -- no mean feat when there is a mistrust of outsiders.

Join us for Rocky Mountain Time! Aug. 2 @ 2pm #NMAINYC is showing 2 films, Before There Were Parks, and Indian Relay! pic.twitter.com/V9KIZyMWoT

But gradually Dye managed to get a true insight into the lives of those who eat, sleep and breathe the sport, in communities which are often very poor and where adult unemployment can be as high as 80%.

"Some of these are super-duper poor communities and in some cases without Indian Relay some of the young kids would fall into trouble," he says.

Dye had some prior knowledge of Indian Relay but admits his project became less about the sport and more about the people, the tribes and the communities it touches.

"You feel like you're falling off the edge of the world," says Dye, who followed teams from the Shoshone-Bannock Nation in Idaho and the Crow and Blackfoot Nations.

"You're in the wild west with no real connection to the rest of the world. It's quite magical. My film was not so much about horse racing, I guess, as the rural west."

Top horses battle it out in Peru

However, the film does capture the madness of the racing and the horse exchanges -- which occur with rider and animal moving at full pelt.

"These are top horses often at the ends of their career," Dye explains. "So they're obviously going at some speed.

"There's dangers but not as many people get hurt as you might think. I think the whole time I was there I saw one hospitalization and the guy was fine in the end."

Old Horn admits that "nobody went into this sport and didn't get hurt" but points out the injuries are relatively low because of the expertise of those involved.

"You need to have an incredibly high level of horsemanship both by the riders and those on the ground," he says. "We don't wear helmets and saddles as we're considered some of the best horse people on the face of the earth.

"If we wore those, we'd be a laughing stock. That's our pride and we take great pride in it."

Indian Relay is immersed in the middle of its season, with races virtually every weekend. Prize money is on offer but the amounts are relatively small, particularly given how far funds have to stretch among the team setup.

But Old Horn says it is not about the money: "It's about the pride, about the bragging rights when you win over the other tribes."

Murray echoes the overriding element of pride, but admits that watching her family members race at breakneck speed can be a harsh experience. Her faith in their horse-handling, however, makes it easier viewing.

"It is nerve wracking," she says. "I remember seeing my son Little Plume ride for the first time. He really wanted to ride but had to wait to get picked. I was in the stands and suddenly my friend was like, 'That's your son racing.'

"I thought no-one would pick him and so it was like, 'Oh my God.' So from there it's no turning back, I can't stop him. Horses have always been in my family -- it's part of my life, an extension of me.

"And it's so good. I remember how hard my son worked feeding, exercising the horses, doing everything that was required. It's a special thing."

Riders like Little Plume are "treated like rock stars," says Dye, but only to a local audience.

"The funny thing is that in the next-door town some people won't have even heard of it," he adds.

Read: 'This is middle-aged crazy'