This tragedy is Russia's fault 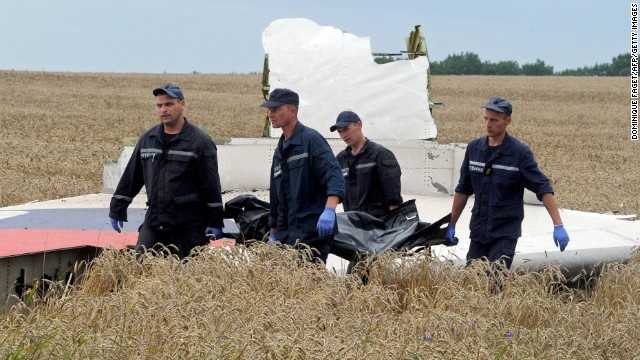 A body is removed from the site of the downed MH17 aircraft in eastern Ukraine.
STORY HIGHLIGHTS

Editor's note: Olexander Motsyk is ambassador of Ukraine to the United States. He will join Erin Burnett Out Front tonight at 7 p.m. ET. The opinions expressed in this commentary are solely those of the author.

(CNN) -- On July 17, the world was dismayed by a terrible tragedy when civilian Malaysia Airlines Flight 17 was shot down over eastern Ukraine in an area controlled by pro-Russian militants.

It is clear to everyone now that that horrific act was perpetrated by terrorists who for months have been destabilizing the Ukrainian state, being trained, financed and armed by Russia. All reports point to the fatal shot having been launched from a Buk missile system that had been brought onto the territory of Ukraine from Russia a few days before the tragedy.

Now, it has become a common understanding that the war led by Russia against Ukraine is not merely Ukraine's business, but has tremendous global implications.

Before the tragedy, Ukraine had done everything in its power to resolve the conflict -- imposed by its neighbor -- by peaceful means. As soon as Ukraine President Petro Poroshenko took office in June 2014, he came forward with a peace plan supported by the international community, including the United States and the European Union. He has initiated a voluntary ceasefire to provide space for peaceful settlement. But Russia and its proxies, who escalated the tensions instead of engaging in negotiations, rejected the plan.

Since then, the demands to Russia on behalf of Ukraine and the international community remained unchanged. We urge Moscow to immediately stop supporting terrorists acting in eastern Ukraine and to discontinue supplies of mercenaries and weapons across the border. Today, terrorists continue killing civilians, destroying infrastructure and shooting down Ukrainian planes with Russian weapons.

While purporting to speak constructively, the Kremlin continues its dark deeds. Their goal is to create a protracted conflict in Ukraine -- as they have in Georgia and Moldova -- in order to prevent Ukraine from economic and democratic development and European integration.

With regard to the so-called "people's republics" of Donetsk and Luhansk, they should be held responsible for threatening the sovereignty of the country that resulted in losses of hundreds of lives. They have been intentionally interfering with international investigation of the incident, removing evidence and mishandling the remains of passengers. Ukraine calls on the United States and the international community to designate these illegal entities as terrorist organizations.

The ability of the Russian leadership to support a full-scale investigation of the crash in an effective way will serve as a major indicator of its intentions to avoid similar tragedies in the future.

Ukraine is doing its best to ensure an immediate, comprehensive, transparent and unbiased international full-scale investigation into the tragedy.

The Ukrainian government remains committed to the implementation of President Poroshenko's peace plan. We are ready to provide a corridor for militants' withdrawal to Russia. In a broader context, Ukraine has been working to address the concerns of people in our eastern regions with corresponding constitutional amendments aimed at broadening the authority of local communities.