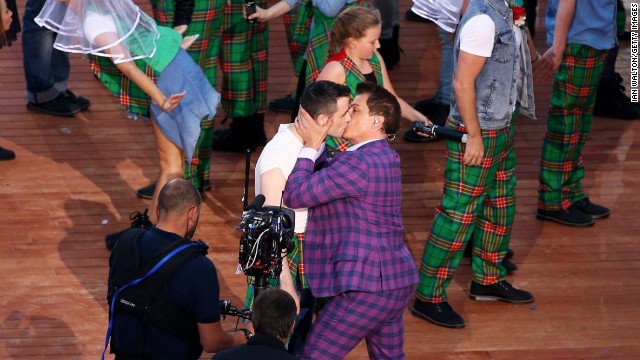 Actor and singer John Barrowman kisses another performer during the opening ceremony of the Glasgow 2014 Commonwealth Games on July 23, 2014. 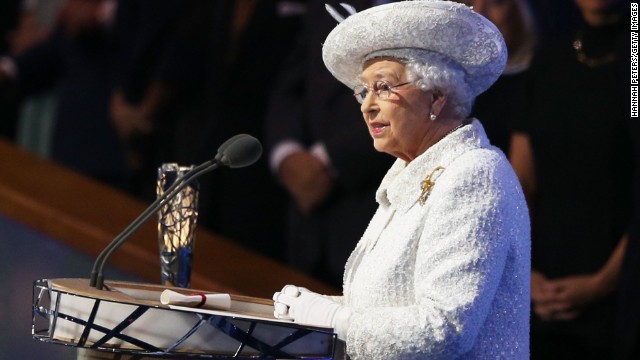 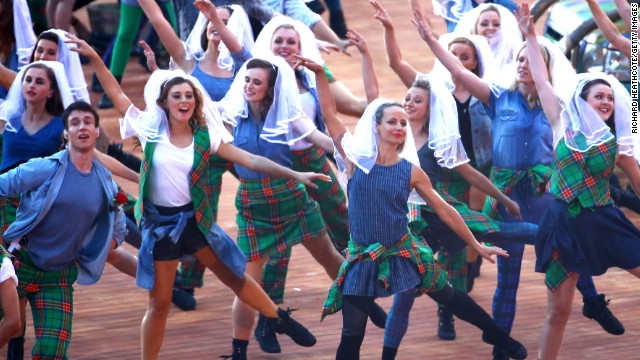 Dancers perform during the opening ceremony. 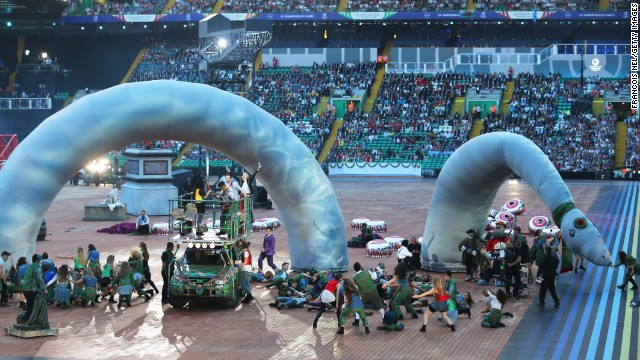 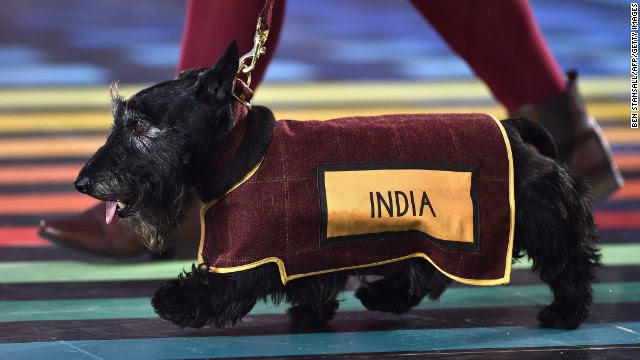 Scottish terrier dogs accompanied the teams as they walked around the arena. 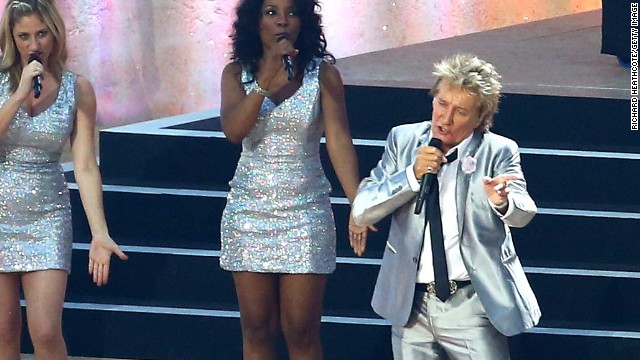 Rock singer Rod Stewart, who was born in Scotland, performed at the ceremony. 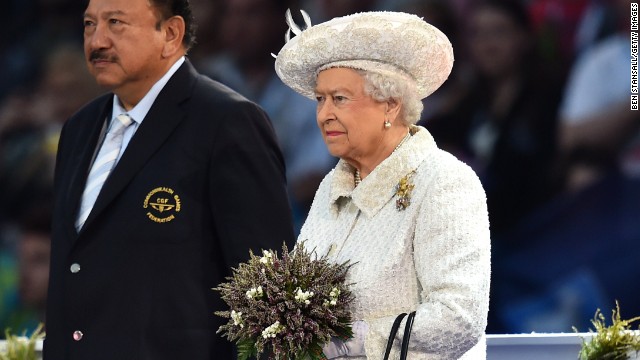 The 88-year-old Queen Elizabeth II is the patron of the Commonwealth Games. 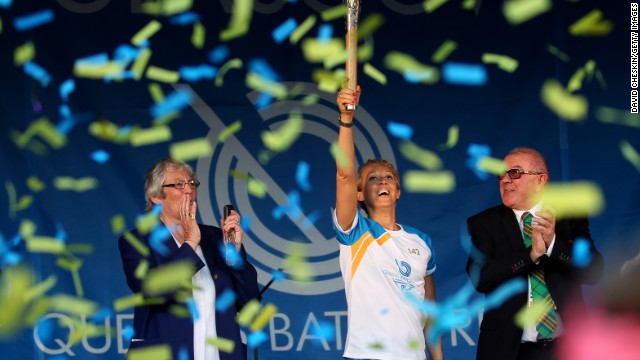 Athlete Allison Curbishley holds aloft the Queen's Baton after its arrival in Glasgow after being transported around 70 nations in a relay. 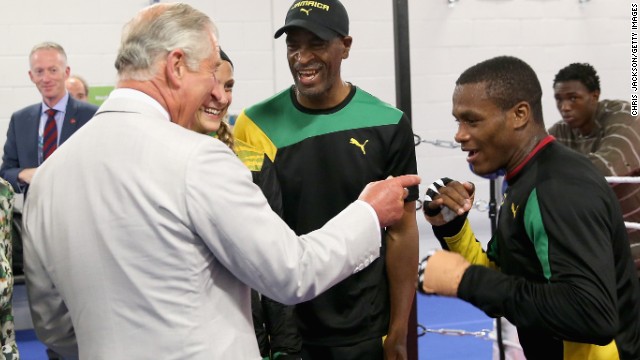 Prince Charles does some mock sparring with a member of the Jamaican boxing team at the 2014 Commonwealth Games. 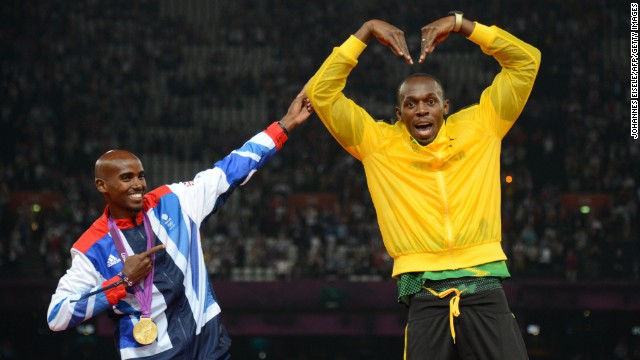 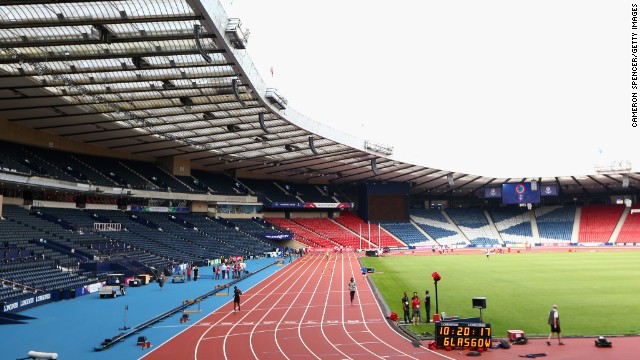 Hampden Stadium will host the track and field competition with the likes of Bolt and Farah as well as the closing ceremony on August 3. 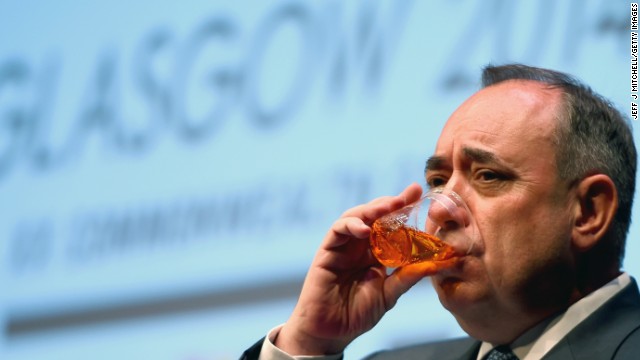 Scotland's First Minister Alex Salmond is hoping the Commonwealth Games will highlight the successes of his country ahead of an independence referendum in September. 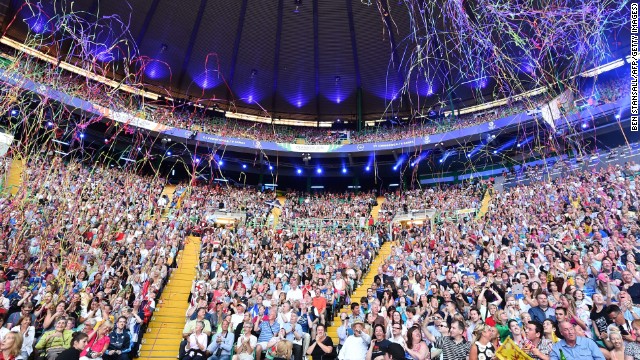 The crowd lap up the atmosphere at the opening ceremony of 20th Commonwealth Games. 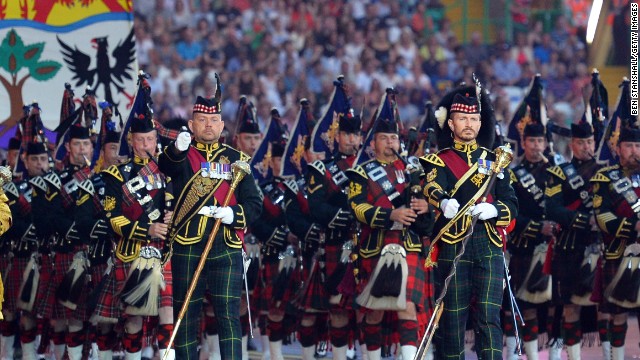 (CNN) -- It was only fleeting and came amid a Scottish extravaganza of pop performances, dancing teacakes and a giant replica sea monster, but there was no mistaking its message.

During the opening ceremony of the 20th Commonwealth Games in Glasgow, actor and singer John Barrowman planted a kiss on a male dancer, before dragging him to the altar for a mock wedding.

It was a move intended to remind millions of viewers that homosexuality remains a crime in 42 of the 53 Commonwealth member countries.

The kiss won broad support on Twitter, though Barrowman retweeted negative comments with the retort: "I am retwtin the neg because I want u all to see how bitter and Nasty and Neg some people r:) I am so happy right now. Jb"

I am retwtin the neg because I want u all to see how bitter and Nasty and Neg some people r:) I am so happy right now. Jb

Queen Elizabeth II made a less controversial appearance, declaring the competition open ahead of 11 days of sport, headlined by a cameo appearance by the fastest man on the planet Usain Bolt.

Britain's monarch read out a message that had been kept hidden inside the Queen's baton during its parade and relay around 70 nations and territories in the last nine months.

"To you, the Commonwealth athletes, I send my good wishes for success in your endeavors," Queen Elizabeth told the athletes.

There was also a minute's silence, led by Scottish First Minister Alex Salmond, for the 298 people who died in the Malaysia Airlines MH17 flight disaster, 82 of whom were from Commonwealth nations.

Usain Bolt: I try to clear my mind

The Malaysian team also carried its flag at half mast on entering the Celtic Park stadium where the ceremony took place.

A capacity crowd of 40,000 were treated to a festival of dance and music with a strong thread of Scottish culture and heritage.

Biggest cheer of the night was reserved for the 310- strong team representing the hosts, the last of the 71 to be paraded, with judo player Euan Burton carrying its flag.

Six-time Olympic gold medalist Bolt was not at the opening ceremony but has been picked for Jamaica's all-conquering 4x100m relay squad.

Bolt is slated to step out at the 40,000-seater Hampden Park stadium on Friday week for the heats of that competition, likely minutes after Mo Farah runs in the 10,000m final.

The pair's antics on the final day of track and field competition at the 2012 London Olympics, where Bolt emulated Farah's famous "Mobot" celebration are still etched in the memory and Games organizers will be hoping for a similar iconic moment.

The warm glow of home success in the London Games, personified by double gold medalist Farah, has left the British public still hungry for multi-sports competition and ticket sales for the Commonwealth Games have been strong.

It means there will be no repeat of the half-empty stadiums which blighted the previous Commonwealth Games in Delhi in 2010 and left organizers facing criticism over the damage to India's reputation and the cost.

The British royal family have been closely identified with the Commonwealth Games since its inception in 1930, originally titled the British Empire Games for nations and territories ruled and administered by the United Kingdom.

The Queen and the Commonwealth

In recognition of decolonization, by the 1970 edition in Edinburgh, Scotland's other major city, the title of the event had been changed to the British Commonwealth Games and by 1978 in Edmonton, just the Commonwealth Games.

Scotland has hosted the Games three times, Edinburgh in 1970 and 1986 and now Glasgow, who fought off competition from Abuja in Nigeria to be awarded the right.

Over 4,500 athletes will take part in 17 sports, in terms of countries and territories participating, 71, the second biggest event of its kind after the Summer Olympics.

Unlike the Olympics, British athletes compete for their home nations of England, Scotland, Wales and Northern Ireland, while there are also teams from the small islands of Guernsey, Jersey and the Isle of Man.

Cyclist Mark Cavendish, who is one of a number of big stars to suffer injury blows ahead of the Games, was due to compete for the Isle of Man, a British crown dependency in the Irish sea.

Cavendish's withdrawal after his crash in the Tour de France was a blow to organizers, but compensated for by the decision of 2012 Tour de France winner Bradley Wiggins to ride for England in the track cycling event.

Aside from Bolt and Farah, the highlight of the track and field competition will be the appearance of Kenya's David Rudisha, who smashed the world record in the 800m in taking gold at the London Olympics, but has been troubled by injury since his triumph.

Some of the most intense competition will be in the swimming pool where traditional power Australia is expected to dominate -- with Alicia Coutts leading the way.

Coutts won gold at the 2012 Olympics and 21 medals for her country in major championships over the past four years, including five golds at the Delhi Games.

Scottish hopes rest with Michael Jamieson, who is heavy favorite for the 200m breast stroke, while the hosts could earn early success in the track cycling with 20-year-old Katie Archibald.

She will attempt to compensate for the absence of six-time Olympic gold medalist Chris Hoy, who announced his retirement last year having originally intended to end his career at his home Commonwealth Games.

In his honor, the velodrome in Glasgow is named after Scotland's favorite sporting son and the action there will start Thursday with Wiggins in the team pursuit.

Competition, particularly between "old foes" Australia, the leading medal winners in the history of the Games, and England, is set to be particularly fierce.

But, by tradition, they have been called the "Friendly Games" -- with competitors enjoying the more informal settings compared with the hot house atmosphere of an Olympics.

The closing ceremony will take place at Hampden Park where the baton will be handed over to Gold Coast in Australia, which is hosting the 2018 Games.

There is a political dimension, with the Games take place against the backdrop of a referendum in September where voters in Scotland will be given the chance to gain independence from the rest of the United Kingdom.

Salmond's Scottish Nationalist Party has been campaigning strongly for a "Yes" vote, but he has promised not to link potential home success as an argument for separation.

"I've taken a kind of self-denying ordinance to concentrate on the Games over the next 10 days and I think that's what the people of Scotland want," he was quoted Wednesday.

Whether politicians on both sides of the argument stick to their pledges is open to question, but what isn't in doubt is the enthusiasm of the Glaswegian residents for the Games, which will highlight their regenerated city to an estimated television audience of 1.5 billion people.