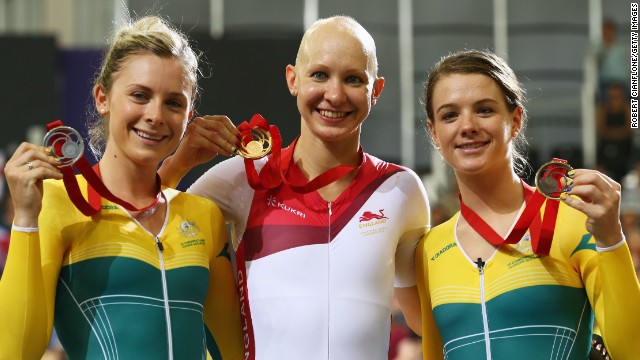 (CNN) -- Inspirational Joanna Rowsell added another gold to her rapidly growing collection with a classy victory in the individual pursuit at the Commonwealth Games in Glasgow Friday.

Rowsell is already the world champion in the discipline and was part of the British trio which won the Olympic team pursuit title at London 2012.

That performance put Rowsell into the global spotlight -- not least because she suffers from alopecia -- a condition that sees sufferers lose their hair.

I was able to bring it to the public eye. I'd like to do more in the future for people who suffered with it
Joanna Rowsell

Further success has followed in the team event, which now involves four-strong lineups, but Rowsell has backed that up with her solo efforts over three kilometer distance -- 12 laps of the indoor velodrome.

The 25-year-old qualified fastest with a Commonwealth Games record of three minutes 29.038 seconds and beat Australia's Annette Edmondson by nearly four seconds in the final in the evening session.

After her latest triumph, Rowsell said she hoped her success would help raise awareness of her condition.

"I didn't realize before the London Olympics that it (alopecia) affected so many people. I was able to bring it to the public eye. I'd like to do more in the future for people who suffered with it," she said.

So so so happy to get the gold tonight in the Individual Pursuit! Thank you everyone for all the... http://t.co/Q41FDRUDnQ

"I won the world title back in February this year but since then I've had a bit of a up and down season with illness and injury so I just so glad it has all come together, because you only get this opportunity once every four years.

"It's very special," she added.

Edmondson's brother Alex also had to settle for silver in the final of the men's 4,000 individual pursuit, beaten by fellow Australian and world record holder Jack Bobridge.

England's Jason Kenny, the reigning Olympic champion, lost out in the final of the men's sprint to 23-year-old New Zealander Sam Webster, beaten by half a wheel in the deciding race of three.

The Games was hit by its first major doping story Friday, with news that Welsh 400m hurdler Rhys Williams had failed a test at the international meeting in Glasgow earlier this month.

"I am utterly devastated about the news of this anti-doping rule violation, which has come as a great shock to me," he said in a statement.

Williams, 30, was the co-captain of the Wales track and field team at the Games, but was immediately withdrawn.

"Welsh Athletics is obviously concerned that this is the second anti-doping violation by a senior Welsh international athlete and will be conducting its own internal review," it said in a statement Friday.

The 19-year-old set a new British record of 22.93 in taking gold from the illustrious duo. "Proud is a talented athlete," said the 34-year-old Schoeman.

There was an upset in the women's 100m butterfly as Australia's Alicia Coutts finished out of the medals in fourth behind Canada's Katerine Savard, who won gold in 57.40 seconds, a Games record.