Part of complete coverage on
Impact Your World
SHARE THIS

Israel-Gaza conflict: How to help 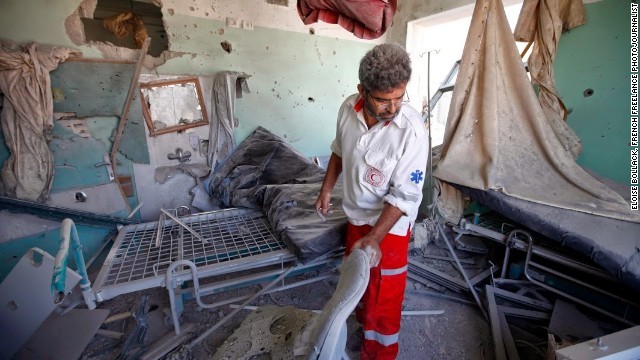 A worker cleans up at Shuhada al-Aqsa Hospital in Gaza after it was shelled on July 21.
STORY HIGHLIGHTS

(CNN) -- The death toll on both sides from hostilities in Israel and Gaza is now over 1,000; among them are scores of children, and many more civilians are injured. Thousands are forced to flee their homes, and those who stay are left terrified by the bombs raining down.

As negotiations for a cease-fire continue, many organizations have begun to provide relief to those in harm's way and to protect those affected by the crisis.

UNICEF estimates that thousands of families in Gaza have seen their homes destroyed or damaged. "UNICEF and partners are procuring essential pediatric drugs for hospitals and health facilities," its website says, "and child protection teams are helping children and their caregivers cope with the psychological distress."

The International Federation of Red Cross and Red Crescent Societies is also on the ground in both Gaza and Israel. In Gaza, it is providing first aid and emergency support, with several medical centers operating where casualties are worst. Teams were able to enter some of the worst hit areas during short-lived ceasefires to help evacuate victims, many of whom were trapped in the rubble of destroyed buildings.

UNICEF stressed that "the escalating violence in Gaza and Israel threatens devastating physical harm and mental distress for children on all sides, the effects of which can last a lifetime as their sense of security is undermined."

The American Jewish Joint Distribution Committee is working with the elderly and disabled in Israel to ensure that they have access to food and supplies, and providing psychosocial support for children in shelters.

JDC is working with at-risk children throughout #Israel during this difficult time. More: https://t.co/AyyAUZUDkJ pic.twitter.com/k959UNS0Zm

The Jewish Federations of North America are helping those Israelis in rocket range find safe spaces, as well as providing trauma counseling and other emergency services.

The organization Medecins sans Frontieres has been supporting Al Shifa Hospital in Gaza City with a surgical team and other medical supplies.

Update from @OsamaDamo about our work to help kids & families in #Gaza and #Israel: http://t.co/ga6158RVOZ pic.twitter.com/nItkERZpYH

Save the Children has been working with local partners in Gaza to provide medical supplies and help those who have lost their homes with necessities such as baby food and mattresses.

Mercy Corps is also providing assistance to civilians in Gaza, delivering food and necessities to those who need them, as well as medical kits to hospitals and clinics.

As the conflict continues, pleas for peace echoed around the world.

On its website, Save the Children joined other organizations in calling for an immediate cease-fire. "We call for parties to address the root causes of violence that has left people in Gaza and in Israel caught in a cycle that must stop once and for all."

"I hate the future so much. We might live, or we might die." Children in #Gaza and #Syria have no place to hide http://t.co/DM96CjPpHH

UNICEF tweeted a poignant quote, reminding us that children in conflict zones everywhere are perhaps the ones who suffer the most: "I hate the future so much. We might live, or we might die."

The organization Seeds of Peace brings teenagers from around the world together to work on peacekeeping skills. A charter on its website reads, "We refuse to be victims. We know it is possible to redirect human passions, even calls for revenge, toward the positive goal of creating peace."