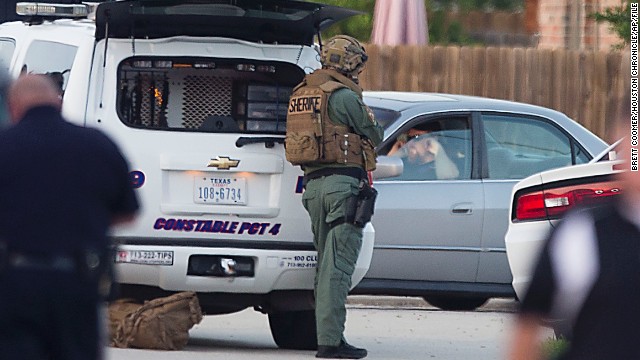 A shooting in suburban Houston this month that left six family members dead was linked to domestic violence.
STORY HIGHLIGHTS

Editor's note: Former U.S. Rep. Gabrielle Giffords is the co-founder of Americans for Responsible Solutions. Katie Ray-Jones is the president and acting CEO of the National Domestic Violence Hotline. The opinions expressed in this commentary are solely those of the authors.

(CNN) -- This month, just outside of Houston, a man police say had a history of abusing and threatening women got his hands on a gun and executed six members of his ex-wife's family -- including four children. On that day, local law enforcement officials believe he was on his way to hunt down other family members when, thankfully, they ended his rampage.

In our country, it's a sadly common story: An abuser or stalker gains access to guns and destroys the lives of women and families in our communities.

That's why it is time for Congress to address this lethal mix of domestic violence and guns. Our leaders must pass laws that prevent stalkers and abusers from accessing guns to intimidate, hurt or kill women.

Domestic violence: The next front in gun control fight

The numbers should shock you: Women in America are 11 times more likely to be murdered with a gun than women in other democratic countries with developed economies. In domestic abuse situations, if the abuser has access to a gun, it increases the chance that a woman will die by 500%.

Most of the time, women are murdered with guns by someone they know, either by a family member or an intimate partner, such as a former or current husband or boyfriend.

Between 2001 and 2012, more women were shot to death by an intimate partner in our country than the total number of American troops killed in the Iraq and Afghanistan wars combined. That is a national shame.

Fortunately, the momentum is on our side. On Wednesday, the Senate will hold its first-ever hearing on domestic violence homicides and the use of gun violence against America's women. Many of our elected leaders are calling for new protections for those who are subject to abuse. States are already taking bipartisan action. And Americans support these laws by staggering margins.

Clinton speaks out for gun control

Currently, federal law prevents people who are under domestic violence protection orders or have misdemeanor domestic violence convictions from accessing guns. But even though increasing numbers of couples are choosing to marry later in life, the law hasn't been extended to address dating partner abuse. And convicted stalkers can still get guns.

Common sense says that these dangerous loopholes should be closed now. Congress has the power to do it.

Those who argue that stalkers don't necessarily exhibit violent or threatening behavior haven't been on the other side of a conversation with a woman who fears for her life because her former boyfriend or acquaintance is promising to find her and kill her. The reality is three out of four women killed by their intimate partner were stalked before their death. We must continue to educate those who don't understand why we need these protections for abused women.

Democrats and Republicans in state legislatures around the country recognize the problem and have come together to pass laws that better protect women from gun violence. This year alone, leaders in six states -- Louisiana, Maryland, Minnesota, New Hampshire, Washington and Wisconsin -- have enacted legislation with overwhelming bipartisan support that will help protect abused women from gun violence.

Faced with laws that don't do enough to keep guns away from domestic abusers and stalkers, Democrats and Republicans chose common-sense change over the status quo.

Opinion: I'm a gun owner and I want gun control

Our leaders in Washington should follow their example and back legislation that prohibits stalkers and dating abusers from having guns. Sen. Amy Klobuchar of Minnesota, a former prosecutor, has a bill that would do just that. It is the responsible thing to do.

Keeping guns out of the hands of abusers and stalkers will take more than a Senate hearing and carefully worded statements that say all the right things. It will require our leaders to show some courage and stand up for common-sense laws. It will require some hard work. And it will require overcoming the power of those in Washington who continue to fight against these laws.

But we urgently need stronger gun laws that protect women. We can't wait any longer. Women's lives are at stake.