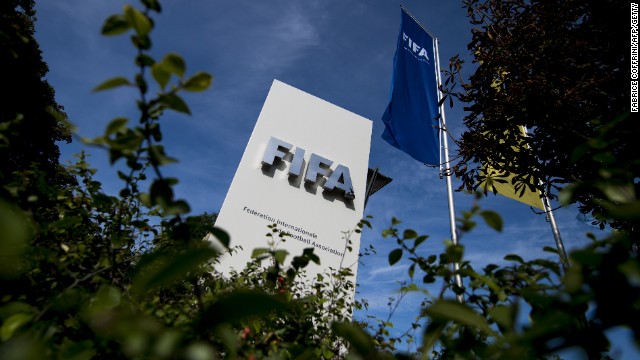 (CNN) -- FIFA has asked the Italian Football Federation (FIGC) to investigate alleged comments from the front runner to become its next president that referred to African players as "banana eaters."

Reports in Italy claim Carlo Tavecchio, who is currently the organization's vice-president, made the remarks at a conference of Italy's amateur leagues at the weekend.

He touched on the debate that has followed Italy's group stage exit at the recent World Cup in Brazil, with some suggesting there are too many foreign players operating in the country's top league -- Serie A.

Tavecchio made reference to the system in England, which has strict rules on players from outside the European Union.

"In England, they identify the players coming in and, if they are professional, they are allowed to play," the 71-year-old was reported to have said by Reuters.

"Here instead we get 'Opti Poba' (a fictional player) who previously ate bananas and then suddenly becomes a first team player with Lazio.

"That's how it is here. In England, you need to demonstrate what you have on your CV and your pedigree."

Tavecchio's remarks prompted one of Italy's leading clubs Fiorentina to say his bid to be FIGC president was no longer "sustainable" while an online campaign set up by an Italian politician asked people to protest at his candidacy.

World soccer's governing body said on Tuesday it wanted the FIGC to investigate and stressed that tackling racism was one of its top priorities.

Piara Powar, executive director of the Football Against Racism in Europe (FARE), said it was little wonder some of Italy's top clubs, and the country's prime minister Matteo Renzi, have come out against Tavecchio's presidency bid.

"It's quite clear there is a strong public opinion focus on this guy and this idea he should not become president at any cost," he told CNN. "Unfortunately, the people that will vote him in later in August don't necessarily share that view.

#Pallotta: "Our position on the president of the FIGC is clear: we think Tavecchio's comments are embarrassing" #RomaUSA

"To have someone who has said the sort of things that he's said, said them in the way he's said them, to become a president of one of the top five footballing countries in Europe really is going to be quite a big shock."

Tavecchio has been president of the Italian amateur football federation for more than a decade and has apologized twice since he made the remarks.

But he retains support from big clubs like AC Milan and is thought to be winning the battle with his rival for the presidency, former Italy midfielder Demetrio Albertini.

#Pallotta: "Tavecchio does not represent Italy or Roma: I am surprised that there are clubs who are still supporting him" #RomaUSA

Although his comments are not enough for FIFA or its European counterpart UEFA to block his bid, Powar thinks they may act if he is elected.

"I imagine if he gets elected in two weeks' time that FIFA and UEFA will start to lobby against him," Powar added. "Because how can he look people from African nations in eye, for example, within FIFA who he has already insulted through these words?

"How can he possibly manage the national team when it has two or three black players but younger, emerging black players.

"The former FIGC president Giancarlo Abete had done a great deal to tackle racism, he was very strong and put in place some very innovative measures.

"I think the question is, where does this leave this very strong struggle, this real big problem that Italian football has had historically?"

The FIGC said they would not be commenting when contacted by CNN but FIFA made its position clear with a statement on Tuesday morning.

It read: "Media reports concerning alleged racist comments by one of the presidential candidates for the Italian FA have alerted FIFA's Task Force against racism and discrimination and its chairman Jeffrey Webb.

"As such, FIFA has written a letter to the Italian FA asking it to take the appropriate steps to investigate and decide on this matter and report to FIFA.

"In the letter, FIFA reminded the Italian FA that the fight against racism is a top priority for FIFA.

"In its correspondence, FIFA also stressed that officials of the football community are expected to act as role models in the fight against racism."