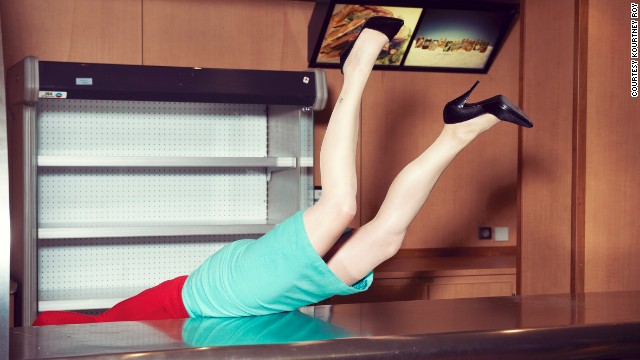 If this doesn't look like your typical racetrack scene, then that's because it's not... 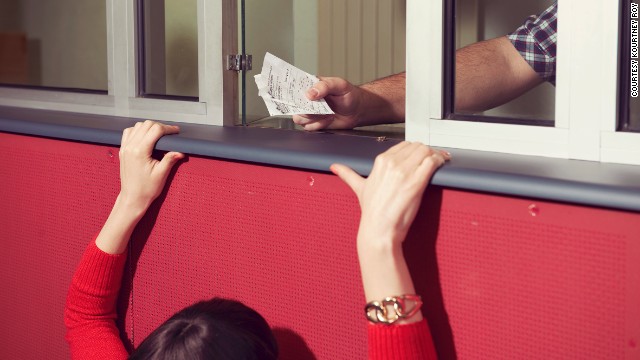 The racetrack is transformed into an eerie, retro timewarp, in these intriguing images from Canadian photographer Kourtney Roy. 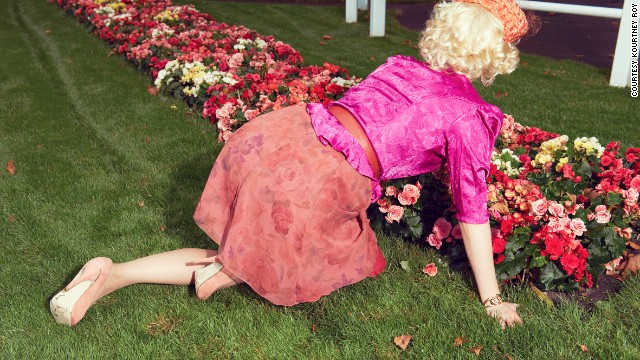 The photographer donned wigs and thrift store costumes, for the shoot at race courses across Paris. "I found that it added a certain ambiguity and uncanniness to the scene when I was partially hidden or when my face was unseen. It seems more ominous," said Roy. 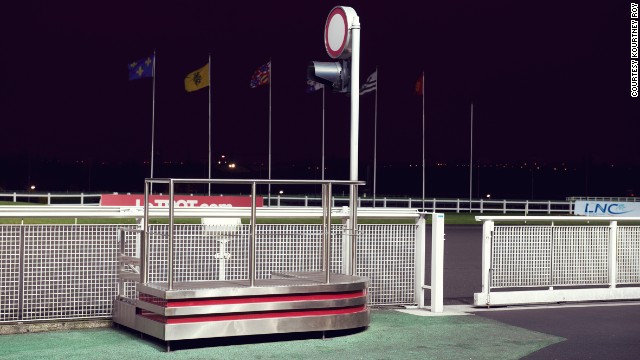 The series -- called "Ils Pensent Déjà Que Je Suis Folle" or "They Already Think I'm Crazy" -- was named the winner of a competition exploring gambling, and exhibited at Le Bal photography center in the French capital. 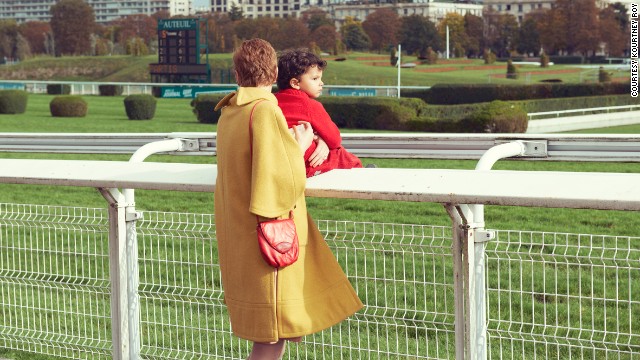 "I do love kitsch, there is a lot of beauty to be found in the everyday, in the banal and overlooked," said Roy. 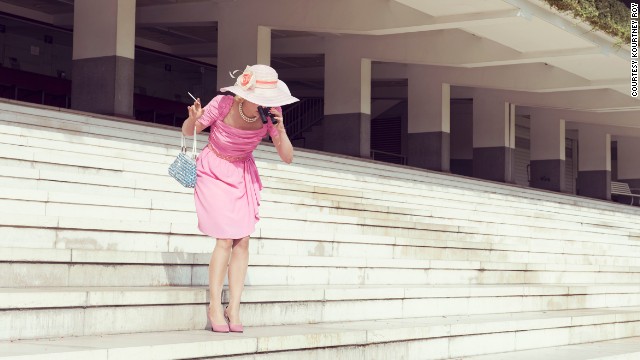 "I was often looking for the liminal spaces at the tracks, the in-between places that, although were often seen and passed over, were never really questioned or 'looked' at," she added. 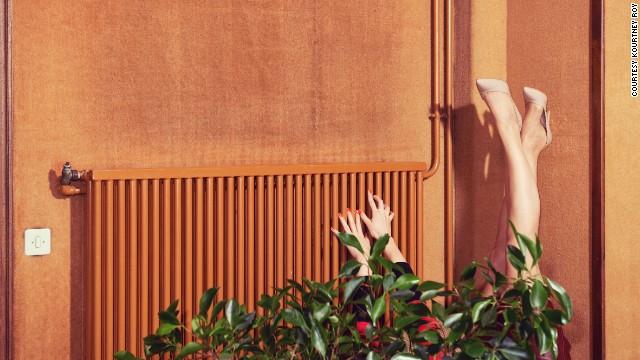 "The photos made me laugh, I thought they were really quirky, and they made me think of the race course as an empty shell," said Nick Attenborough, of Great British Racing. 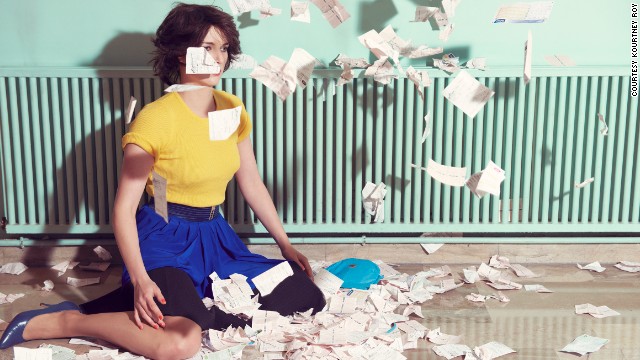 There were no racetracks where Roy grew up in "the wilds of northern Ontario." But once she did discover the grandstand, she was hooked: "There is really nothing like spending an afternoon eating fries and drinking beer, while watching the most magnificent creatures in the world run past you at dazzling speeds."
HIDE CAPTION
Out on a limb
You bet
Flower power
Sinister scene?
Mysterious muse
Look closer
Dark humor
Just the ticket
<<
<

(CNN) -- A woman's legs protrude over an empty bar. Manicured hands cling desperately to a ledge. Disheveled femmes fatales crawl across a flowerbed.

The racetrack is transformed into an ominous retro time warp in these intriguing images from Canadian photographer Kourtney Roy.

"I would say that my work is sinister, but it's also imbued with a dark humor," said the 32-year-old, originally from "the wilds of northern Ontario."

"At the racetrack there is a certain energy in the air, it is very magical, even if there is a seedy and dark side to it as well."

Roy's unnerving images could be scenes from a 1960s murder mystery, rather than a sports arena usually filled with stampeding horses and screaming punters.

Just who is this glamorous young woman, pictured on an eerily empty race course? 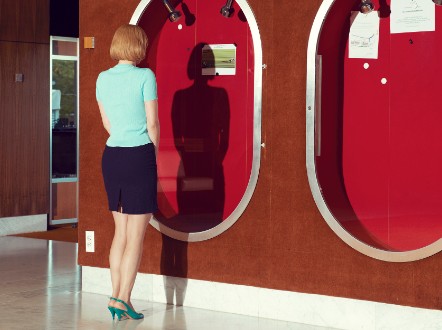 In fact it is Roy herself, who donned thrift store costumes for the surreal photo shoot at stadiums across Paris.

"During the shoot, people saw what appeared to be a mad woman in a wig throwing her legs up in the air and generally enacting acrobatic poses for the camera," she said.

There really is nothing like watching the most magnificent creatures in the world run past you at dazzling speeds
Kourtney Roy, photographer

"But I found that it added a certain ambiguity and uncanniness to the scene when I was partially hidden or when my face was unseen. It seems more ominous."

Romance of the racetrack

Growing up in rural Canada, Roy discovered the joys of the racetrack later in life, describing being "raised by a family of lumberjacks and spending my youth trapping and taming wolves."

"There were no racetracks where I came from. We were too busy trying not to freeze to death."

Inspired by the writings of hard-living punter and poet Charles Bukowski, Roy later explored the grandstand with gusto.

"There is really nothing like spending an afternoon eating fries and drinking beer, while watching the most magnificent creatures in the world run past you at dazzling speeds," said the photographer, who now lives in Paris.

She's hardly the first artist drawing inspiration from the track.

From Edgar Degat's 19th century paintings depicting jockeys in luminous color, to Audrey Hepburn in the 1964 musical "My Fair Lady" and recent HBO series "Luck" starring Dustin Hoffman, what makes the racetrack such a ripe backdrop for artists? 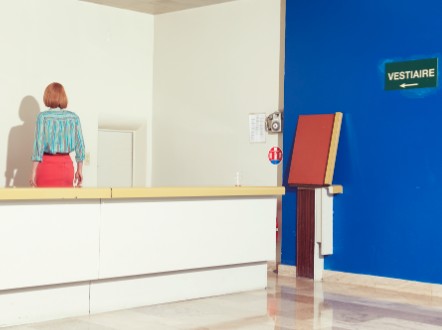 The viewer is left to imagine sinister scenarios hovering outside the frame in Roy's intriguing pictures.
Kourtney Roy

"It's got that mystique of people knowing more than you do," said Nick Attenborough of Great British Racing, a company which promotes British horseracing around the world.

"It's a sport of intrigue. It's one man betting his judgment against another. One horse trainer or one jockey trying to win against a load of other guys."

And it's a different intrigue altogether once the stadium is empty.

I've been to race courses before which are quite empty and they're sad places
Nick Attenborough, Great British Racing

"I've been to racecourses before which are quite empty and they're sad places in comparison to the joy, pleasure, and buzz you get when there's racing," said Attenborough.

"It's slightly spooky. And that's what Roy's photos have done. The woman leaning over the bar -- there's no drinks, no decorations, and it looks soulless.

"And I dare say that's true of any stadium -- they need people to help them reverberate."

It seems that even without horse racing, the track is still a scene of drama.

Read: Melbourne Cup -- The legs that stopped a nation

Learn: Lords and My Fair Ladies swan about in style

Inspire: The enduring allure of horses in art