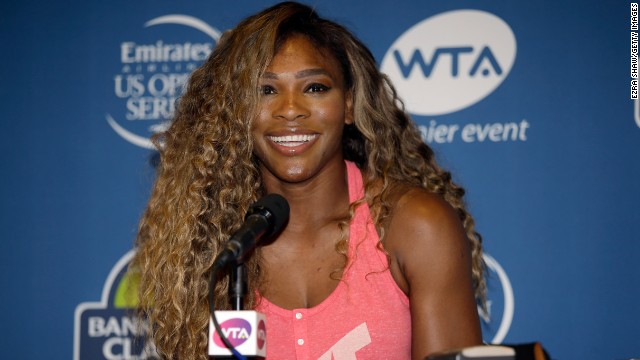 (CNN) -- It was one of the most disturbing sights Wimbledon has witnessed.

Serena Williams, a 17-time grand slam champion, disorientated, unsteady on her feet and unable to serve properly on Court No. 1.

Her doubles match alongside sister Venus lasted just three games, with Serena unable to get the ball over the net when it was her turn to serve.

But now, as she prepares to return to action at the WTA's Stanford tournament, the 32-year-old says the commotion caused by her viral illness had taken her by surprise.

"They just said I was really ill, and really under the weather and I just wasn't doing very well," Williams told reporters prior to the Bank Of The West Classic in California about her turn at Wimbledon.

"I was really scared after because I didn't realize how I felt until later and it's just, you know, 'Serena, keep your time, you will have the rest of your life to keep playing tennis hopefully.'

"I heard a lot of the response weeks and weeks later because I didn't leave my house or my bed for a few days.

"But by the time that happened when I read or heard about it from other people I was just like, 'Oh really, I already moved on.' I was working out and starting to try to play again."

Williams will take on the Czech Republic's Karolina Pliskova on Wednesday saying she feels "very good" but that she will have more medical tests once the season has finished.

Serena skipped a tournament in Sweden after her Wimbledon illness but is now focusing on preparation ahead of the U.S. Open.

The word from the referee's office is that Serena Williams is suffering from a viral illness. #Wimbledon http://t.co/TmRAWfQjnD

She has won the title at Flushing Meadows two years in a row and needs to claim a hat-trick next month to avoid a first season without a slam title since 2011.

"After Wimbledon I stayed around in Europe because I was going play in Bastad, and I feel so bad about not being able to play there," she said.

"I ended up going on what I called 'vacation,' which is like when you have fun in the sun but you practice in the day, in the morning. I tried to practice very early so I can have fun later."

Venus is in action on Tuesday, facing Poland's Paula Kania, while the standout clash sees the No. 5 seed -- Ana Ivanovic, take on Sabine Lisicki, from Germany.