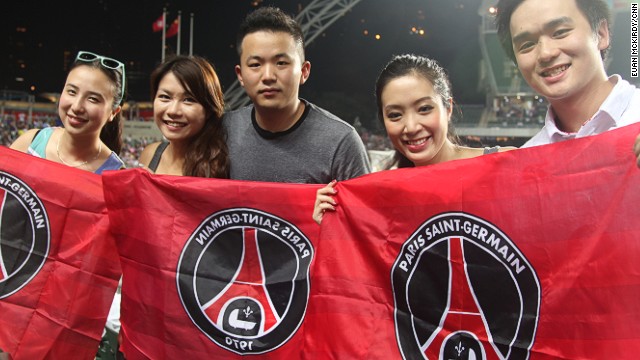 Hong Kong (CNN) -- For at least 10 minutes, it looked as if it could have been a fairytale night for the home side.

Within only the first few minutes, Hong Kong's league winner Kitchee found itself in the jarringly unfamiliar position of being a goal to the good against star-studded French football champion Paris Saint-Germain.

Natural order reasserted itself shortly after, however, with PSG winger Hervin Ongenda scoring a well-taken goal as the crowd erupted. It was the first of six for the Ligue 1 side, including a hat-trick for star striker Zlatan Ibrahimovic.

As the wisdom of arduous preseason tours is being questioned in some quarters, especially as exhausted players return from the World Cup, PSG was in bullish form here in Hong Kong, and its growing popularity in evidence. 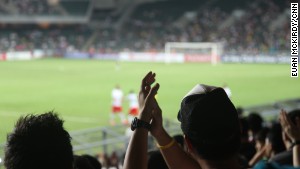 Indeed, wading through the crowds before kickoff, it was almost impossible to tell which team held home advantage in Tuesday's match, with PSG replica shirts -- mostly sporting the number 10 and Ibra's name splayed across the back -- easily outnumbering any other sartorial choices.

"This is the first time I've seen them live," says Calvin Lee, a finance professional who wears his navy-blue PSG jersey over his white business shirt. "I've been a fan for around two years, ever since they started buying up international stars."

The Asia preseason tour has become an annual ritual for many of Europe's top teams, although this year many English high-flyers, having won over Asian fans through years of visits, are instead turning their attention to that other great untapped market, the United States.

The popularity of English teams in Hong Kong, as in so many other Asian markets, far outstrips that of their European neighbors, even Champions League winner Real Madrid and fellow Spanish giant Barcelona, as well as German titleholder Bayern Munich.

"It's exciting to see these matches live (in the stadium)," says 16-year-old Mok Lui Ngai, who is wearing a PSG replica shirt with Beckham's name on the back, a throwback to when the English superstar played half a season in the French capital.

"I'd also come and watch if it was Arsenal or Manchester United, though."

It is through tours like PSG's mini-excursion into Hong Kong, and onto China, that the marketing departments of these clubs hope to redress this balance.

"We are quite lagging behind the English Premier League clubs and you need to catch this distance so I think it's important to be here, even though it's a long (way to) travel," PSG's executive vice-president of business operations Frederic Longuepee tells CNN.

It's not just the clubs that are targeting Asian fans as the financial future. The French league moved this season's traditional opener, the French Super Cup, in Beijing, echoing the Italian FA's decision to hold its version, the Supercoppa, abroad in recent years.

These games, featuring the league and domestic cup winners, are a step up from preseason friendlies like PSG's match against Kitchee.

Saturday's Trophée des Champions clash with cup-winning Guingamp presents an opportunity for PSG to cement the allegiance of soccer fans in the Chinese capital.

Despite the travel time from France, and the relative lack of recuperation time that the players have had in this World Cup year, Longuepee says it makes "perfect sense" to serve up an exhibition match in Hong Kong, en route to Beijing.

"Since the French Ligue 1 decided to come to Asia to play the French Super Cup it makes sense to come earlier," he says. "To come here and to meet with our partners and sponsors."

This year, there has been criticism of the demands of summer tours from other top managers, including English side Arsenal's Arsene Wenger and new Manchester United boss Louis van Gaal.

PSG's head coach Laurent Blanc, however, argues that the commercial aspects of the club's summer plans do not interfere with his players' fitness, or their preparation for a grueling season ahead.

"It was always ... a good opportunity for the squad to come to Asia, especially Hong Kong, ahead of the Champions' Trophy (Super Cup) in Beijing so it was all planned, there is no problem at at," the 1998 World Cup winner told CNN.

He also said that the team didn't need to stoop to scrapping for the allegiance of fans in Asia.

"Without any (arrogance), PSG is one of the greatest football teams in Europe, so it's already (a jewel) of the football world ... there's nothing to pretend, nothing to compete."

While other top managers bemoan the travel time and physical demands that these tours put on their squads, PSG is a relative newcomer to the Asian market and welcomes the opportunity to meet potential devotees -- and convert some undecideds.

"It's part of being a great football club," says Longuepee. "You have to come and see your fans, otherwise you cannot expand and you cannot compete."

He added that there were further plans to travel to the Middle East, home of the club's wealthy Qatar backers, in the French season's winter break, a time traditionally reserved for teams to recuperate.

And with a 6-2 scoreline to take to Beijing for next week's French Cup, and a host of potential fans who will be increasingly likely to tune into PSG's French and Champions' League games next season, overseas detours like this aren't going away any time soon.

Read: Millions love 'beautiful game,' so why does China struggle?