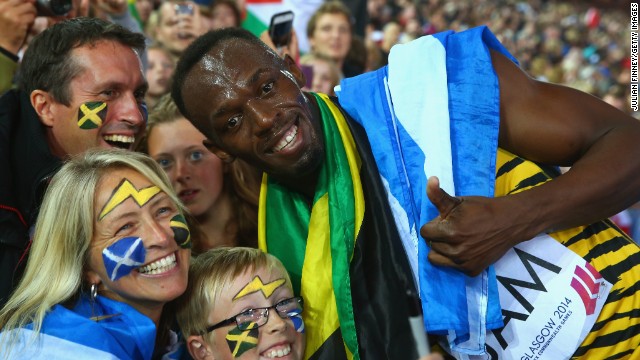 Usain Bolt delighted the crowd by posing for numerous pictures after his relay gold for Jamaica.
STORY HIGHLIGHTS

(CNN) -- The very best was reserved for last and Usain Bolt did not disappoint.

The track and field superstar took the baton on the anchor leg of the sprint relay for Jamaica a stride behind an inspired English quartet before surging clear in the home straight -- the winning time a Commonwealth Games record of 38.58 seconds.

Despite being a six-time Olympic champion, it was Bolt's first gold at the Commonwealth Games and he celebrated by prolonged laps of honor of Hampden Park, signing autographs and posing for endless selfies.

Glasgow was fun..great team work to get the baton around.. TeamJamaica all day everyday #glasgow2014... http://t.co/wSsJRlc8jG

It was a fitting finale for the athletics program and Bolt had treated the capacity crowd to his usual pre-race antics, cavorting to "I'm Gonna Be" by the Proclaimers before switching to race mode as only he can.

England's last leg runner Dan Talbot might have dreamed of gold but he could not match Bolt's giant stride and had to settle for a deserved silver ahead of Trinidad and Tobago.

Like Bolt, she has been having a relatively low-key year ahead of preparing for the 2016 Olympics in Rio, but still showed a neat turn of foot to lead her team home in 41.83 seconds, also a Games record.

Nigeria took silver ahead of England.

Earlier, 40-year-old mother of two Jo Pavey struck a blow for veteran athletes with a superb bronze in the women's 5,000m for England.

There was another fairytale story in the men's javelin where Julius Yego of Kenya, famous for perfecting his technique by watching clips on YouTube, took gold with a throw of 83.87 meters.

Away from the track and field action, England's Tom Daley dominated the men's 10m platform diving to retain his title in superb style.

He put together six fine dives to win by over 82 points.

The 20-year-old Daley was one of the poster boys of the London 2012 Olympics, where he took bronze, and his gold was one of the highlights for an England team who have easily topped the medals table at the Games ahead of arch-rivals Australia.

The final day of action will see the men's and women's road races in cycling and an eagerly-anticipated New Zealand-Australia clash in the women's netball final.

The Games will officially close Sunday evening after 11 days of action.