(CNN) -- James Brady, a former White House press secretary who was severely wounded in the 1981 assassination attempt on President Ronald Reagan and later became a prominent gun-control advocate, has died.

Brady died at 73 after a series of health issues, his family said in a statement on Monday.

"Over the years, Jim inspired so many people as he turned adversity into accomplishment," the statement said.

Brady was one of four people hurt in Reagan's shooting by John Hinckley outside a Washington hotel.

Suffering a head wound, it was erroneously reported at one point that Brady had died. He was, however, left partially paralyzed and confined to a wheelchair for the rest of his life. 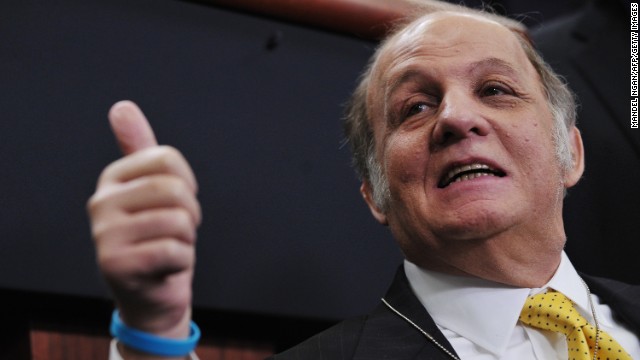 James Brady, a former White House press secretary who became a prominent gun-control advocate after he was wounded in the 1981 attempt on President Ronald Reagan's life, died Monday, August 4. He was 73. 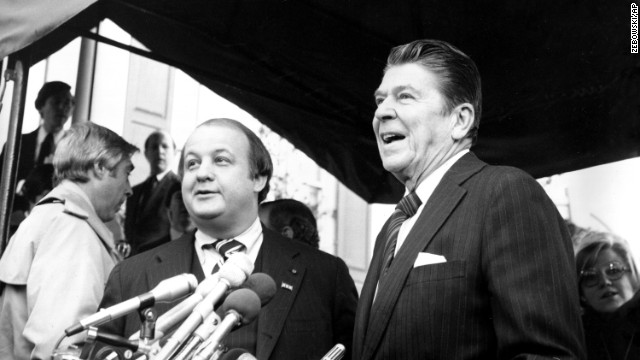 Reagan introduces Brady as his press secretary on January 6, 1981, in Washington. 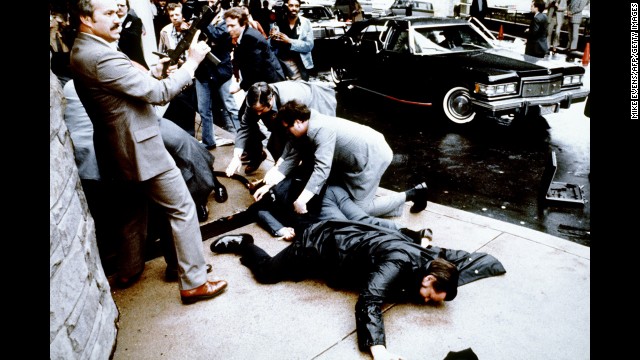 Police and Secret Service agents react during the Reagan assassination attempt, which took place March 30, 1981, after a conference outside the Hilton Hotel in Washington. Lying on the ground in front is wounded police officer Thomas Delahanty. Brady is behind him, also lying face down. 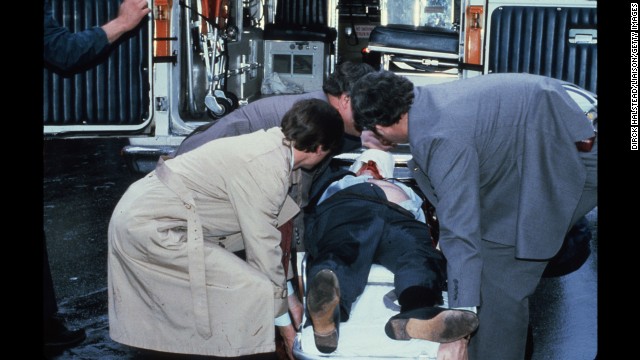 Brady is placed into an ambulance shortly after being shot. He suffered a head wound and was left partially paralyzed. 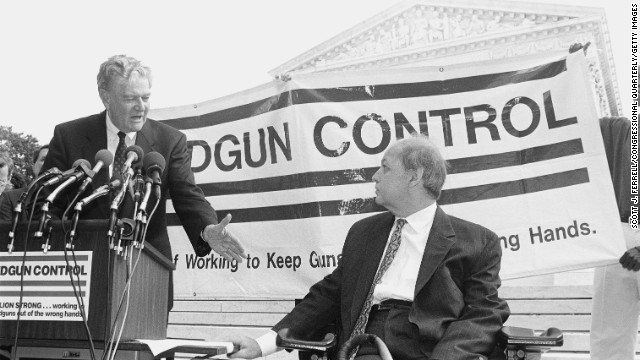 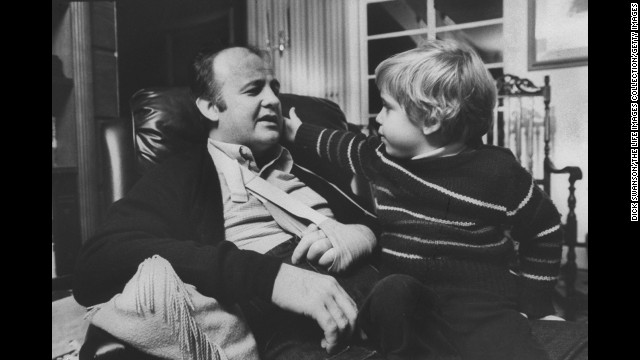 Brady, with his left hand in a sling, chats with his son, Scott, in November 1981. Because of the shooting, Brady had to use a wheelchair for the rest of his life. 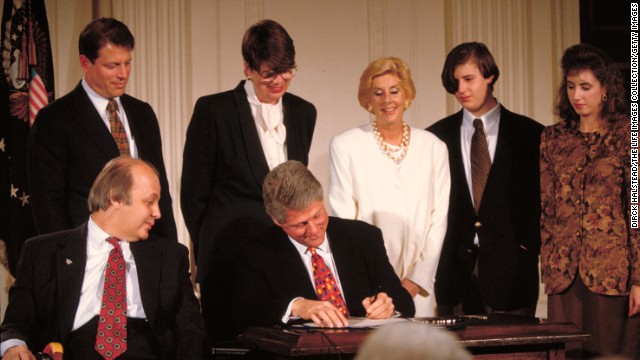 Brady is next to President Bill Clinton as Clinton signs the Brady Bill on November 30, 1993. The bill, which was fiercely fought over for years before Congress approved it, required background checks for gun purchases. 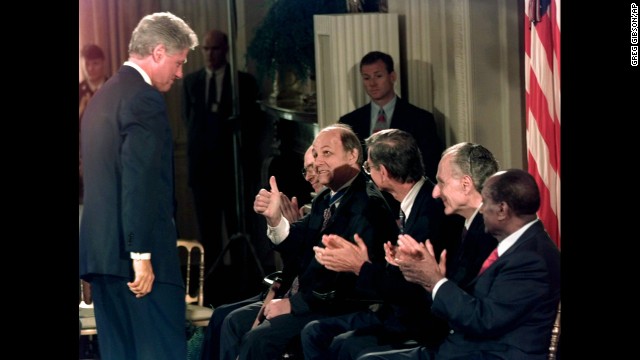 Brady gives a thumbs-up to Clinton at the White House on September 9, 1996. Brady was receiving the Presidential Medal of Freedom, the highest civilian award in the United States. 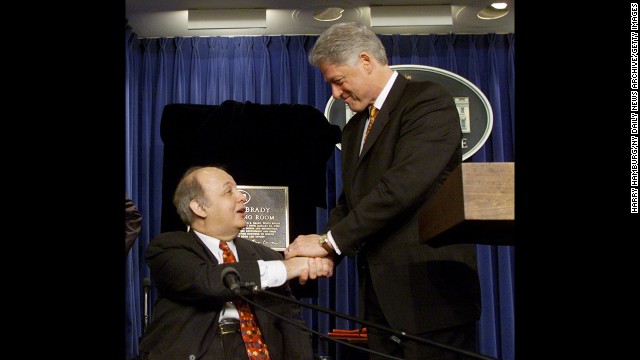 Clinton congratulates Brady in February 2000, when the White House press briefing room was named in his honor. 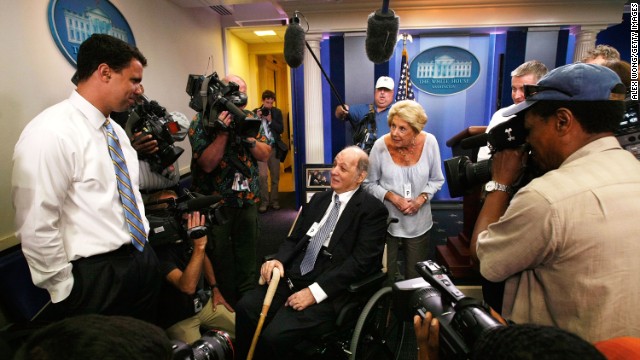 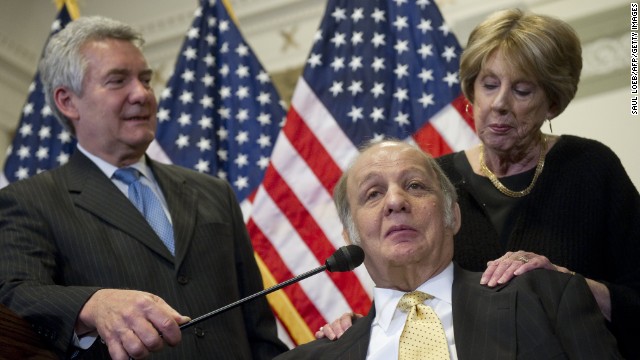 Reagan, severely wounded as well, also survived the attack and served two terms as President. Hinckley was found not guilty by reason of insanity in the shooting and has spent the ensuing years in a psychiatric hospital.

After leaving the White House, Brady launched the Brady Campaign to Prevent Gun Violence, which pushes for stricter firearms laws.

He inspired the Brady Bill, which was fiercely fought over for years before Congress approved it and President Bill Clinton signed it into law in 1993. It requires background checks for gun purchases.

Opinion: The man who made people talk about guns

"Jim is a legend at the White House for his warmth and professionalism as press secretary for President Reagan; for the strength he brought to bear in recovering from the shooting that nearly killed him 33 years ago; and for turning the events of that terrible afternoon into a remarkable legacy of service," Obama said in a statement.

The Brady Campaign also acknowledged his death in a tweet: "We are heartbroken over James Brady's passing. We offer our deepest condolences to his wife, Sarah, and their family."

We are heartbroken over James Brady's passing. We offer our deepest condolences to his wife, Sarah, and their family. http://t.co/WNwluCBtbY

Brady was a recipient of the Presidential Medal of Freedom, the highest civilian award. The White House press briefing room also was named in his honor.

"He knew how information flowed in the city of Washington and he had a great sense of humor that the press liked and respected," Fitzwater told CNN. "He is a remarkable guy who will be remembered well by everyone who knew him."

Brady's gun activism included lending a hand to other organizations with similar goals.

He and his wife, Sarah, appeared in a 2011 ad for the group Americans for Responsible Solutions, an organization formed by former congresswoman Gabrielle Gifford's and her husband, Mark Kelly, after she was shot and severely wounded at a campaign event in Arizona.

.@gabbygiffords & I didn't know #JimBrady well, but our family has thought a lot about him over the last 3+ years. Sending prayers.

"Jim was the personification of courage and perseverance. He and Sarah never gave up, and never stopped caring about the causes in which they believed," she said in a statement.

Opinion: James Brady: The warrior, the hero, the 'Bear'

Luise Rainer, who won back-to-back Oscars in the 1930s for "The Great Ziegfeld" and "The Good Earth" only to quit Hollywood at the height of her fame, has died.
Singer Joe Cocker
updated 5:01 PM EST, Mon December 22, 2014

Joe Cocker, the British blues-rock singer whose raspy voice brought plaintive soul to such hits as "You Are So Beautiful," has died at 70.
Norman Bridwell, creator of 'Clifford the Big Red Dog'
updated 6:26 PM EST, Tue December 16, 2014

Mary Ann Mobley, who was the first Mississippian to be crowned Miss America and then went on to a successful movie career, has died at 77.
Ken Weatherwax, Pugsley on 'Addams Family'
updated 4:35 PM EST, Wed December 10, 2014

P.D. James, the British novelist renowned for her crime novels featuring detective Adam Dalgliesh as well as such works as "The Children of Men," has died at age 94.
Singer, actress Sabah
updated 3:38 PM EST, Wed November 26, 2014