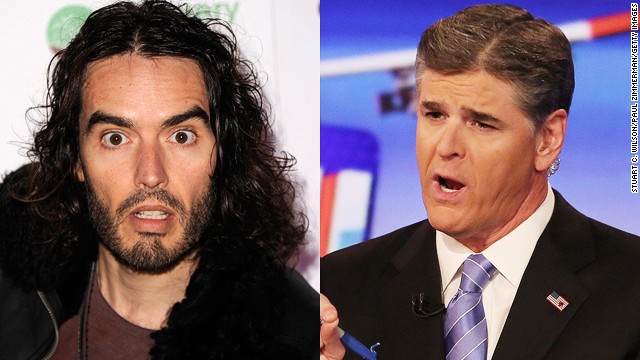 (CNN) -- It may have started as a TV debate about the Israel-Hamas conflict, but it's now turned into a seemingly endless online war of words between Russell Brand and Fox News anchor Sean Hannity.

The British comedian, actor and occasional political commentator branded Hannity a "terrorist" last week after the conservative U.S. pundit berated a Palestinian guest on his show during a heated debate over Israel's ongoing war with Hamas militants in Gaza -- a conflict that has claimed the lives of hundreds of Palestinians and dozens of Israelis in the past month.

Here's a look at some of the most serious conflicts involving Israel and its neighbors -- conflicts that have spanned more than six decades.
Video shows ISIS beheading journalist
updated 11:17 AM EDT, Wed August 20, 2014

A video released by ISIS shows the beheading of U.S. journalist James Foley and threatens the life of another American if President Obama doesn't end military operations in Iraq.
Israelis jailed for refusing to serve
updated 5:04 AM EDT, Tue August 19, 2014

The sights at the Gaza zoo couldn't be sadder, after it was nearly destroyed during recent Israel-Hamas conflict.
'Strive for peace and pursue it'
updated 12:11 PM EDT, Fri August 15, 2014

Both Hamas and Israel have chosen conflict over real peace negotiations again and again in the past, writes Rabbi Yehiel Grenimann.
How can Hamas claim victory?
updated 11:05 AM EDT, Fri August 15, 2014

With so many conflicts, on so many fronts, here's a quick look at what's happening.
'Teens' slayings call for justice'
updated 10:29 AM EDT, Sat July 5, 2014

A sense of Egypt's historic role and the traditional animosity of their military toward Islamist radicalism have propelled Egypt to take a central role in the on-off cease-fire talks.
Which Mideast powers support Hamas?
updated 5:50 PM EDT, Wed August 6, 2014

If the Gaza truce holds and Israel's Operation Protective Edge comes to its conclusion, some things are certain.
Mideast peace as far away as ever?
updated 12:26 PM EDT, Wed August 6, 2014

Tensions between U.S. President Barack Obama and Israeli Prime Minister Benjamin Netanyahu have been strained for years.
Why so many civilian deaths?
updated 9:16 AM EDT, Wed August 6, 2014

Images from the conflict between Israel and Hamas depict apparent civilians, caught in the middle.
'Bring Hamas to the table'
updated 9:06 AM EDT, Tue August 5, 2014

It may have started as a TV debate about the Israel-Hamas conflict, but it's now turned into an online war of words.
Inside mind of Hamas' political leader
updated 2:20 PM EDT, Mon August 4, 2014

Hamas' political leader, who lives in Qatar, sits down with CNN for an exclusive interview.
Misery heightened by war
updated 6:43 AM EDT, Mon August 4, 2014

Nafoz Mohammed is living in a cramped two-room apartment with 16 other people, hours holed up in fear.
Prayers and dreams in Gaza
updated 12:54 AM EDT, Sun August 3, 2014

The birth of a child is normally a joyous occasion, but it is tinged by sadness and anxiety in Gaza. Ian Lee reports.
Who's who in Hamas
updated 1:24 PM EDT, Thu July 31, 2014

Amid the Gaza conflict, experts try to figure out who's in charge of "the resistance."
Inside a Hamas tunnel
updated 6:10 AM EDT, Wed July 30, 2014

The opening was so small that CNN's Wolf Blitzer -- no physical giant -- had to bend down to climb inside.
Read more on CNNArabic

Follow CNNArabic for the latest news and analysis from the Middle East and rest of the world.