Is organic food better for you? 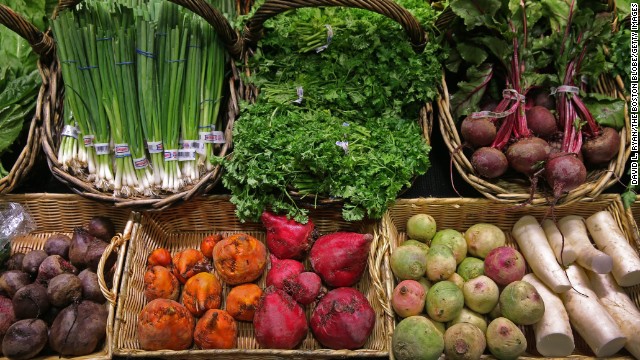 Editor's note: Aaron E. Carroll is a professor of pediatrics at the Indiana University School of Medicine and the director of its Center for Health Policy and Professionalism Research. He blogs about health policy at The Incidental Economist and tweets at @aaronecarroll. The opinions expressed in this commentary are solely those of the author.

(CNN) -- Recently, a study published in the British Journal of Nutrition said that organic fruits and vegetables are more nutritious.

A press release declared it the "largest study" of its kind. Because of its size and breadth, some people believe that it trumps previous research which showed organic food did not appear to be any safer or more nutritious than conventionally grown food.

Despite the hoopla, I think this study offers little new information and is not very convincing in making a claim that organic food is somehow "better for you."

This new study, like many before it, was a systematic review and meta-analysis. That means it wasn't a new clinical trial or report of laboratory research. It was a specific kind of analysis that allows for a "study of studies." Basically, researchers set out to find all relevant research in a field, and then combine all of it together into one big analysis.

Know when to buy organic

This type of analysis allows for many smaller studies, which might not have much power, to be merged into a study that might allow for more comprehensive inspection. It also allows for research that on its own might not be robust enough to achieve some sort of statistical significance.

Systematic reviews are sometimes preferable to regular review articles because they have reproducible methods. By stipulating how scientists searched for research, how they determined what studies were good enough for inclusion, and what tests were done, systematic reviews allow others to judge the merits of the work, and to test its conclusions if desired.

Clarified: What does 'organic' mean?

In 2009, for example, a group of scientists published a major review of organic versus conventionally grown food, covering research from 1958 through 2008. They reviewed 52,471 articles and found 162 studies that compared crops and livestock products. They deemed 52 of them high enough quality for inclusion in their analyses. They found no significant difference between organic and conventionally grown food with respect to nutrient content.

However, this study was considered by some to be methodologically imperfect.

So in 2012, researchers from Stanford University worked on this topic and published a systematic review and meta-analysis. They looked at research through May of 2011, found 460 studies, and identified 237 that met their inclusion criteria. Of these, 17 were studies of human diets, and 223 were studies of foods themselves.

Again, the result was that there's a lack of evidence that organic foods are significantly more nutritious than conventionally grown food.

Which brings us to the most recent study. The authors of this paper acknowledged the previous reviews, but claimed that they weren't comprehensive enough. So they searched the literature from 1992 through 2011 and reviewed 448 studies. They deemed 343 appropriate for inclusion, which did make this a "larger" study.

But remember that this study didn't include much more "newer" data than the Stanford study did. It simply had more data because it was more permissive in the type of studies that it deemed of high enough quality to be included.

First of all, it's important to be realistic about what antioxidants can and can't do. They are a type of compound, used by our body, to fight against "free radicals" or chemicals that can cause damage to many structures in the body by stealing electrons from certain molecules. Antioxidants can "give" electrons to free radicals so they don't take from our bodies.

But antioxidants aren't "nutrients." They also aren't all the same. Each one works in a certain way in different parts of the body. More importantly, there is little evidence that more antioxidants will lead to better health.

Vitamin E has shown mixed results in the Women's Health Study, the Heart Outcomes Prevention Evaluation trial, and the GISSI-Prevenzione trial. Beta-carotene was shown to have no effect on heart disease or cancer. Mixtures of antioxidants didn't prevent cardiovascular events in women or cancer heart disease, or death in anyone. These studies all included much larger doses of antioxidants than would likely be received by eating organic fruits and vegetables.

Second, the most recent study also found that organic crops are lower in protein. That's an actual nutrient, and it's being ignored in much of the media reports.

Third, while levels of pesticides may be higher in conventionally grown food, none of the studies have detected levels of chemicals that approach anything near what would be classified as an unsafe level.

Finally, though, this study provides an opportunity to understand how we might think about systematic reviews in general. If it were so obvious that organic foods were nutritionally superior, we would need no meta-analysis. Large studies would find clear benefits with respect to nutrients, and that would be that. We are having this argument because it is hard to find a benefit.

Moreover, when a systematic review finds a benefit that an old study didn't, by being more permissive of the research it includes, that should give us pause. It's entirely possible, of course, for previous work to be flawed and to have left out critical research, but that doesn't appear to be the case here.

It seems that the recent study included everything the old study did, and then added to it research that didn't make the cut the first time. That's potentially problematic.

Of course, it's a judgment call as to which analysis is correct. I tend to favor the Stanford study, because it seems like it was more rigorous in excluding studies with weaker methodologies.

But as with many things, people's predisposed beliefs will likely color their interpretations of which study is correct. Even if you favor the newer study, the differences, while statistically significant, do not provide evidence to support the notion that organic foods are more nutritious.

I would be remiss if I neglected to mention one more thing. The Stanford study was done with no external funding at all. The newer study, though, cost $429,000 and was funded by a charity that "supports organic farming research." That doesn't mean that a conflict of interest tainted the methods or results, but it should at least be acknowledged.