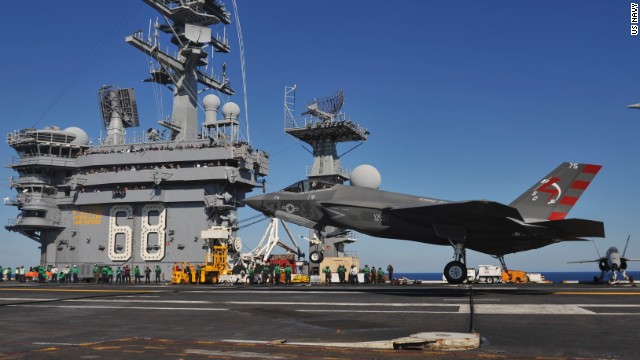 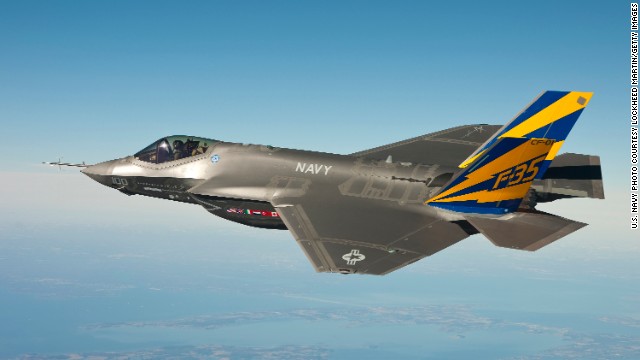 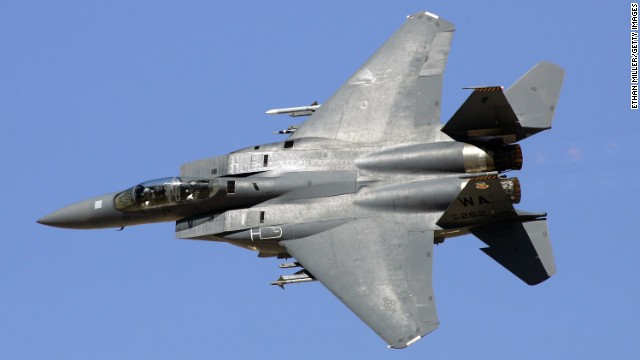 An F-15E Strike Eagle flies during a demonstration in 2007 near Indian Springs, Nevada. The F-15E was designed for long-range, high-speed interdiction without relying on escort or electronic warfare aircraft. It was derived from the F-15 Eagle, which was developed to enhance U.S. air superiority during the Vietnam War. 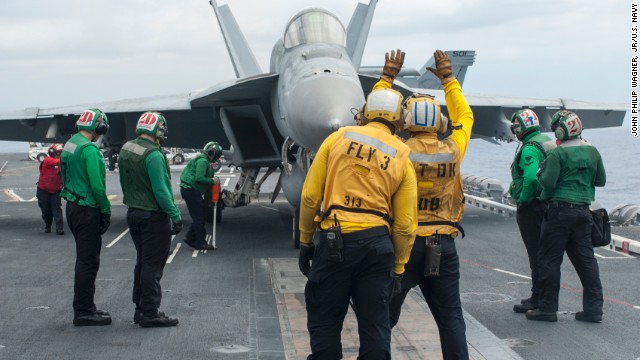 An F/A-18E Super Hornet from the Sunliners of Strike Fighter Squadron 81 taxis onto a catapult prior to launching from the flight deck of the aircraft carrier USS Carl Vinson. 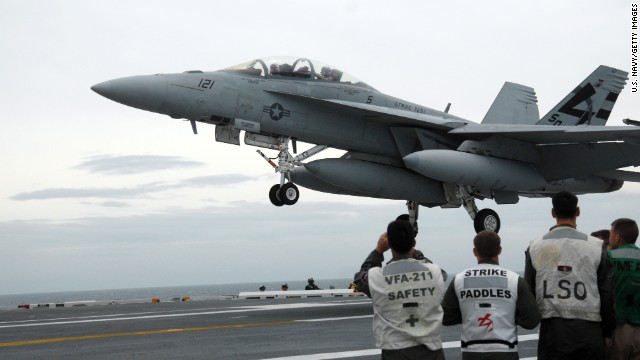 An F/A-18 Hornet is pictured aboard the USS George H.W. Bush on May 19, 2009. The F/A-18 Hornet, a late-'70s contemporary of the Air Force's F-16 Fighting Falcon, became the workhorse of U.S. carrier-based air power, and still supplements the Navy's and Marines' more current fleet of F/A-18E and F/A-18F Super Hornets. It is designed as both a fighter and attack aircraft. 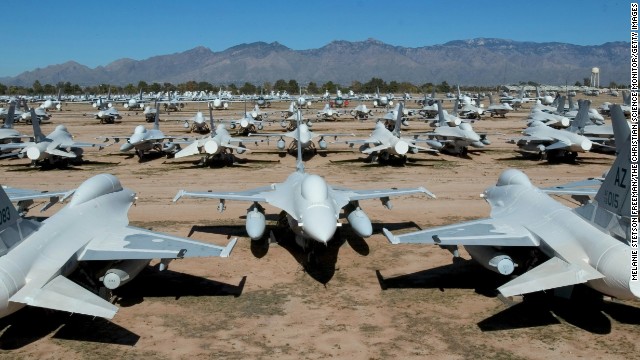 F-16 Fighting Falcons are parked at the Aerospace Maintenance and Regeneration Center in Tucson, Arizona, on December 11, 2004. General Dynamics (which was later sold to Lockheed) delivered the U.S. Air Force its first F-16As in 1979. More than 4,500 of the fighters have been built and are used by more than 20 nations in addition to the United States. 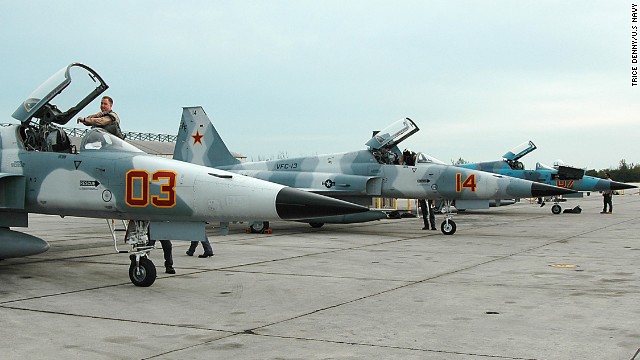 Pilots perform daily flight checks on their F-5E/F Tiger aircraft in Key West, Florida, on January 7, 2005. The Vietnam-era aircraft -- one of several offshoots of the original Northrup F-5s that went into service in the early 1960s -- is used to simulate adversary aircraft in training. 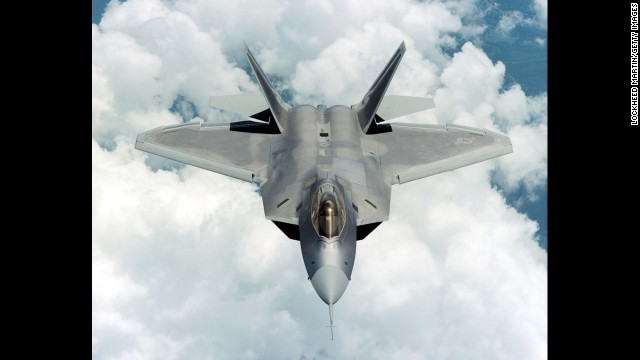 A F-22 Raptor flies over Marietta, Georgia, home of the Lockheed Martin plant where it was built. The F-22 is the only fighter capable of simultaneously conducting air-to-air and air-to-ground combat missions. 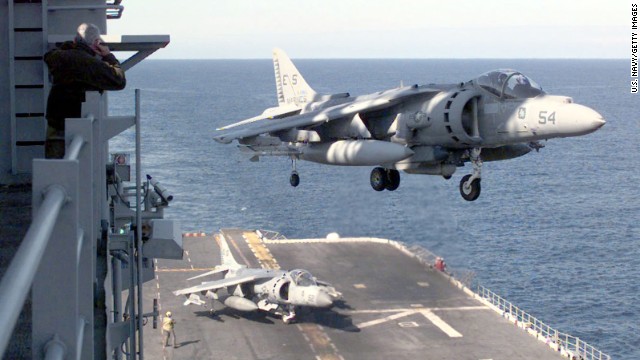 Editor's note: Douglas A. Ollivant, a senior fellow with the New America Foundation, served as director for Iraq at the National Security Council during the Bush and Obama administrations and is now senior vice president of Mantid International, LLC, a strategic consulting firm that has business interests in the south of Iraq, including security, defense and aerospace clients. The opinions expressed in this commentary are solely those of the author.

(CNN) -- The new ISIS offensive in the North of Iraq has both shaken the Kurds and threatened the Yazidi minority with not only genocide, but also cultural extinction. In response the United States early Friday morning used airpower against ISIS targets inside Iraq. This is the first use of force against ISIS both since ISIS rebranded from al Qaeda in Iraq and since the departure of U.S. forces at the end of 2011.

So what can U.S. airstrikes accomplish? Airpower is incredibly potent when properly used, but nearly useless in the wrong situations. ISIS will present both these alternatives in Iraq.

Put very simply, airpower is incredibly effective against an enemy who is on the offense. If an enemy—be it a person or a vehicle or a weapon system—is on the move and/or fighting, they create a "signature" that is easy to spot from the air.

Since there will be no U.S. forces on the ground as target designators or air controllers, being able to see a target from the air will be crucial. So, a column of ISIS trucks or—as seen early Friday morning—a captured artillery piece firing against Kurdish positions, each make easy acquisition. Against these targets, airpower is nearly invincible. One thinks of the devastation released over two decades ago by U.S. airpower on the "Highway of Death" (albeit these forces were not attacking, but retreating—but the signature is the same).

Objectives of U.S. airstrikes in Iraq

Why did U.S. decide to strike ISIS now?

So when President Obama talks about targeted airstrikes to protect American personnel in Baghdad or Irbil, he is, in essence, saying that if ISIS attacks toward these cities, we will use airstrikes on their then-vulnerable forces.

Note that the President did not say that airstrikes would be used to eject ISIS forces from Mosul or Kirkuk or Fallujah. For in densely populated cities like these, airpower has real limitations. An enemy in defensive positions, particularly in urban terrain, is very difficult to engage with airpower. Even if the target can be hit, the possibility for collateral damage that causes civilian casualties is very real. And if the target is missed, the collateral damage can be exponentially higher, even catastrophic.

So while mission creep is always a danger in any war, in this case the chances of it seem rather minimal. The President has chosen one means—airpower—and given it a mission at which it excels; prevent enemy forces from attacking prepared positions, whether in Irbil or Baghdad. This mission is well within the capacity of U.S. airpower. When and if unleashed, U.S. warplanes can absolutely prevent ISIS from moving against these two Iraqi cities.

But reclaiming territory from ISIS will be another matter altogether. This will require a unified Iraqi effort—Arab and Kurd alike—under a new government with the will, legitimacy and resolve to accept the casualties that a ground offensive will require. We need only look at the U.S. experience in Second Fallujah—almost 10 years ago now—to picture what this might look like. Nor will U.S. ground forces be joining in this endeavor. This must be clear. There is no—zero—appetite in the U.S. public for such a commitment.

To that end, we must hope that Iraq remains on its constitutional timeline so that a new government can be formed and begin the long, hard task of regaining control over its territory. Therefore, new Iraqi President Fuad Masum must charge the largest bloc in the Iraqi parliament with forming a government. Soon.