Robin Williams: The man beyond the screen

In the wake of his death from an apparent suicide, that question looms large as fans and friends try to grasp how someone who brought so much happiness to the world could leave it under a cloud of such despair.

It's the dichotomy of fame in that while a celebrity can be so well-known there are parts of their lives and selves they never share with the public.

And while only his loved ones truly knew the private aspects of the Oscar-winning actor whose performances could elicit tears as easily as they could giggles, Williams did allow us to see how multifaceted he could be.

These are just some of them: 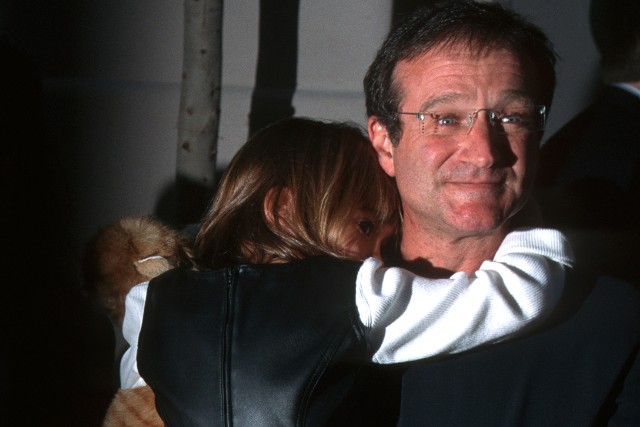 Williams holds his daughter, Zelda, at the "Jumanji" premiere in 1995.
Ron Galella/WireImage/Getty Images

The last image Williams left for the world on his Instagram was a poignant one: a black and white image of the actor holding his then toddler daughter with the caption "#tbt and Happy Birthday to Ms. Zelda Rae Williams! Quarter of a century old today but always my baby girl. Happy Birthday @zeldawilliams Love you!" He posted a similar image earlier in honor of his son Zachary's birthday.

He often spoke lovingly of being father to the pair and another son, Cody. "My children give me a great sense of wonder," Williams said. "Just to see them develop into these extraordinary human beings." 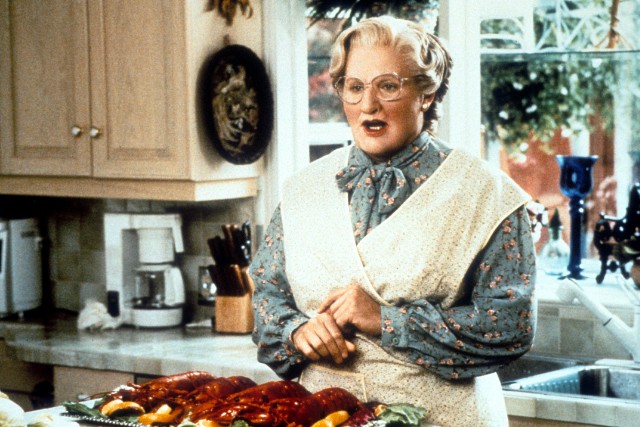 Sure he was funny on-screen, but Williams also liked to pull a leg or two in real life. He told fans during a 2013 Reddit "Ask Me Anything" session that he once walked into a San Francisco sex shop in full Mrs. Doubtfire make-up and tried to buy a sex toy.

"And the guy was about to sell it to me until he realized it was me -- Robin Williams -- not an older Scottish woman coming in to look for a very large [sex toy] and a jar of lube," Williams said. "He just laughed and said "what are you doing here" and I left." 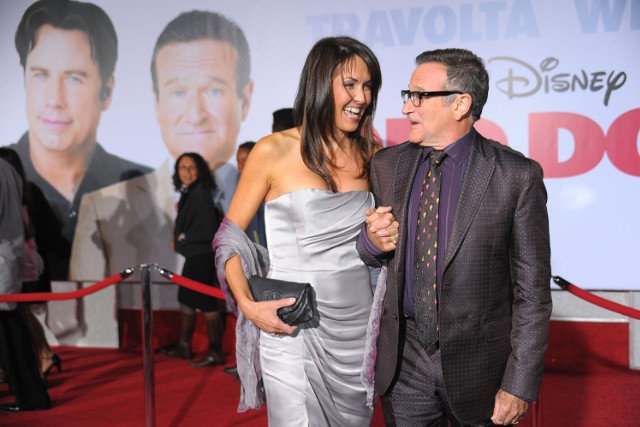 The actor was married three times. His union with Valerie Velardi from 1978 to 1988 produced his son Zachary. Williams was married to Marsha Garces from 1989 to 2010, with whom he had Zelda and Cody. In 2011, he married graphic designer Susan Schneider.

The breakups were costly for Williams, he told Parade magazine.

"Divorce is expensive. I used to joke they were going to call it 'all the money,' but they changed it to 'alimony.' It's ripping your heart out through your wallet. Are things good with my exes? Yes. But do I need that lifestyle? No." 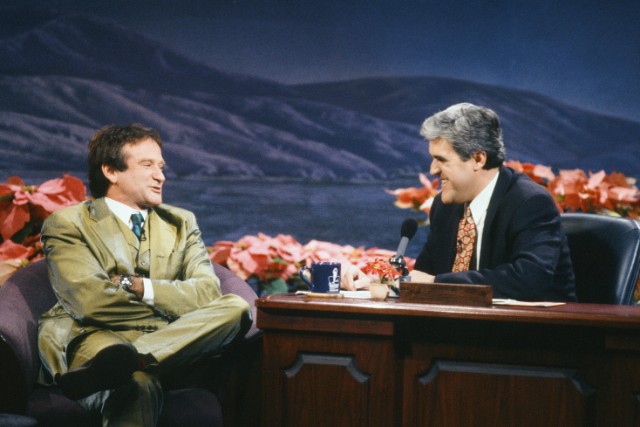 Williams appears on the first season of "The Tonight Show with Jay Leno" in 1992.
Margaret Norton/NBC/Getty Images

There was a good reason Williams has been so deeply mourned by his show business colleagues. He showed himself to be incredibly loyal to friends such as Jay Leno and the late Christopher Reeve, who came to love Williams before he was famous.

After Williams' death, Leno said, "I saw him on stage that very first time he auditioned at the Improv in Los Angeles, and we have been friends ever since. It's a very sad day."

It was while students at Juilliard in New York City that Williams and Reeve -- who would find fame in the role as Superman in the '70s and '80s -- cemented a bond. In fact, after Reeve was paralyzed in a riding accident, he credited Williams with making him laugh again.

Reeve was about to undergo a serious operation when Williams showed up dressed in surgical scrubs and speaking in a Russian accent, saying he needed to do a rectal exam. "For the first time since the accident, I laughed," Reeve said. "My old friend had helped me know that somehow I was going to be OK." 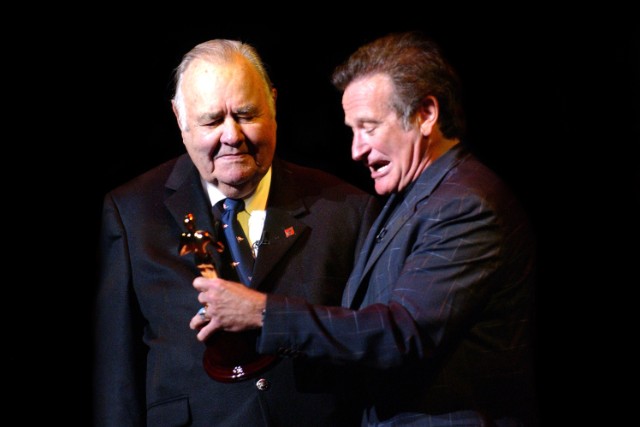 While so many younger actors looked to Williams for inspiration, he was a a huge fan of the late comedian Jonathan Winters, whom Williams discovered as a child while watching Jack Paar on "The Tonight Show" with his father. Years later, an adult Williams would share the "Tonight Show" stage with Winters and cast Winters to play his son on his hit show "Mork & Mindy." When Winters died in 2013, Williams wrote a moving appreciation of his mentor for The New York Times.

"No audience was too small for Jonathan," Williams wrote. "I once saw him do a hissing cat for a lone beagle." 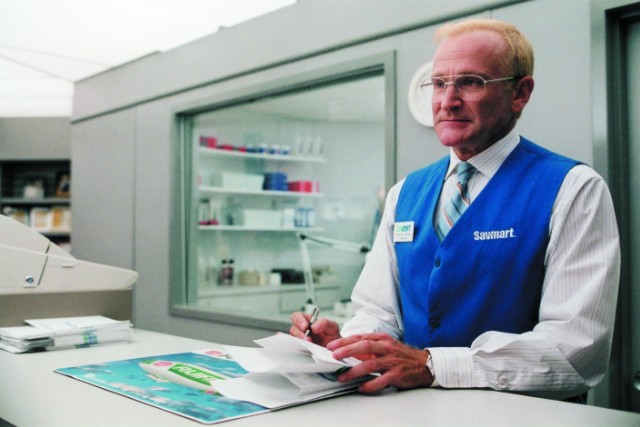 His skills as a zany funny man were legendary, but Williams could also deliver riveting dramatic performances.

2002 was especially a break-out year for him as he played a killer in the film "Insomnia" and a stalker photo technician in "One Hour Photo." Williams not only changed his look for the latter to play Seymour "Sy" Parrish but he said in an interview that to prepare, he "watched some interviews with serial killers -- 'Psychotics Through the Ages.' It's a collectible tape from Time-Life Books. But basically, it was using the material and extrapolating from there."

It's a role that still astonishes.

"Williams' finely calibrated performance was utterly free of the tics and affectations that are so tempting to someone who has come to count on and crave the audience's love," Washington Post critic Ann Hornaday writes. "Rather than seek his fans' approval with the actorly equivalent of ingratiating winks, Williams was willing to completely inhabit a character who was somehow terrifying, pathetic, creepy and vulnerable all at once." 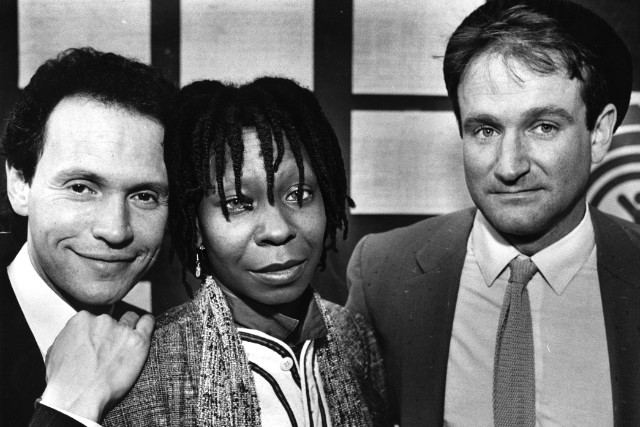 As one of the co-hosts for Comic Relief's debut in 1986, he helped raise both funding for and awareness about the homeless. But that was just one of the many charities to which Williams gave his time and resources.

"Robin came from a family with money -- he was brought up with a silver spoon in his mouth, and I think he felt so blessed that he wanted to do something for people who weren't brought up like that," Comic Relief founder Bob Zmuda told The Los Angeles Times. 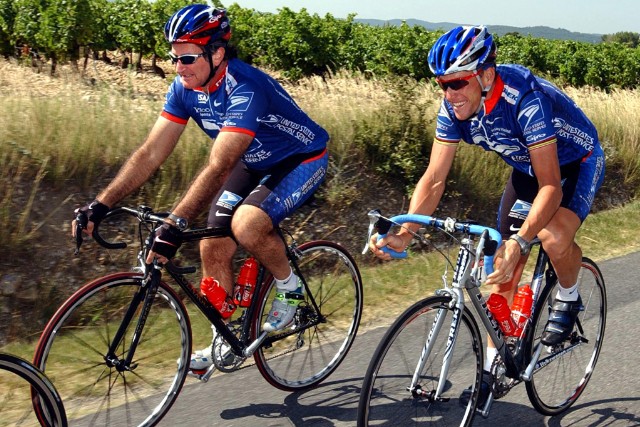 Williams involvement with sports went beyond that time he dressed up a as Denver Broncos' cheerleader for an episode of "Mork & Mindy."

Robin Williams: His passion for cycling

Die-hard fans remember his hilarious stand-up routine about the origins of golf, and he would often end up on the cam at various sporting events. The actor was a close personal friend of then-professional cyclist Lance Armstrong, who he would join in training. 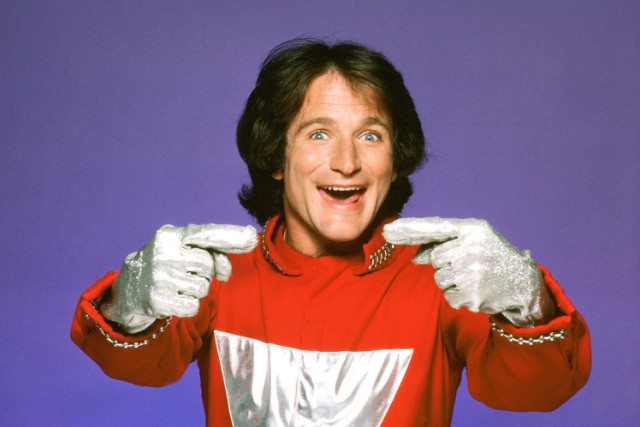 Perhaps it was playing an alien that did it.

It turns out that Williams was a bit of a sci-fi geek who when asked his favorite book said, "Oh my God, Isaac Asimov's Foundation trilogy. It's one of the greatest books of all time, and the greatest character is The Mule." 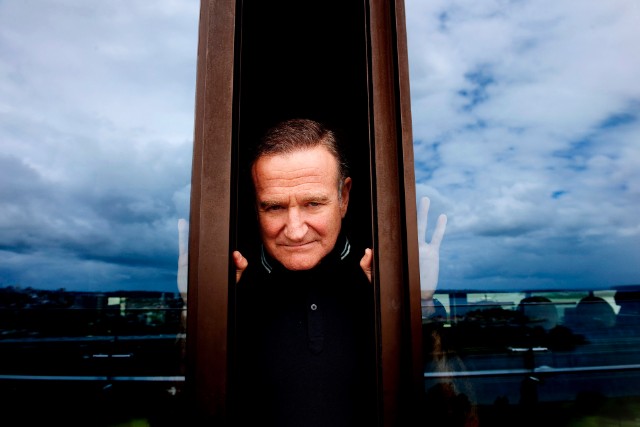 Beloved around the world, Williams' comedy had a global reach.
Tracey Nearmy/EPA/Landov

The man who struggled

As shocking as his death has been, Williams was open about his issues with substance abuse and stints in rehab. He blamed his relapse into drinking for helping to end his second marriage.

"You know, I was shameful, and you do stuff that causes disgust, and that's hard to recover from," Williams told The Guardian in 2010. "You can say, 'I forgive you' and all that stuff, but it's not the same as recovering from it. It's not coming back."

Robin Williams and the dark side of comedy

Even then it seemed that Williams was trying to find his way. Asked whether he was happier in his life, he responded "I think so. And not afraid to be unhappy. That's OK too. And then you can be like, all is good. And that is the thing, that is the gift."

Videos: The world according to Robin Williams

7 Robin Williams movies that made your childhood

Robin Williams, who first made America laugh and eventually touched "every element of the human spirit" in a remarkable range of performances, died at age 63.
Complete coverage

See our complete coverage as we remember comedian and actor Robin Williams.
The world according to Robin

Watch and remember the career of Robin Williams by revisiting some of his best moments from stage, film, and television.
Comedic actor Robin Williams
updated 10:02 PM EDT, Sat October 25, 2014

Robin Williams gave a lot of advice and his words carry as much power now as they ever did.
Robin Williams: Full of talent, full of demons, full of heart
updated 12:33 PM EDT, Thu August 14, 2014

Of all the things to say about Robin Williams, the truest may be this: He made people smile.
Entertainment world mourns passing of Williams
updated 4:59 PM EDT, Tue August 12, 2014

A collection of some of the beloved comedians' more colorful stand-up moments throughout the years.
Behind Williams' genius was the great comic Jonathan Winters
updated 6:00 PM EDT, Wed August 13, 2014

Before Robin Williams, there was Jonathan Winters.
I met Robin Williams: Your stories of the comic legend
updated 12:03 PM EDT, Mon August 18, 2014

Robin Williams was not only known for bringing laughter to so many throughout his career but for bringing compassion to his philanthropic causes as well.
Robin Williams: The man beyond the screen
updated 11:14 AM EDT, Wed August 13, 2014

Who was Robin Williams?
Williams leaves behind 4 films to be released
updated 4:22 PM EDT, Tue August 12, 2014

There didn't seem to be too much that Robin Williams couldn't do.
Robin Williams: King of talk show guests
updated 12:13 PM EDT, Tue August 12, 2014

There was never a dull moment when Robin Williams sat in the guest's chair. Here are some of the best.
Where to stream his essential performances
updated 5:33 PM EDT, Tue August 12, 2014

Robin Williams, who died Monday at age 63, was Peter Pan to some, Mrs. Doubtfire to others, and a beloved actor to many.
Robin Williams' beloved movie characters
updated 4:20 PM EDT, Tue August 12, 2014

Here's a look back at some of the more than 100 movie characters that actor Robin Williams brought to life.
7 Robin Williams movies that made your childhood
updated 8:00 AM EDT, Wed August 13, 2014

If there was any actor who could make the entire family laugh, it was Robin Williams.
Patients' families remember 'comedic Mother Teresa'
updated 2:13 PM EDT, Tue August 12, 2014

As a medical student who used humor to help his patients, Robin Williams' role in "Patch Adams" was touching and memorable.
Robin Williams and the dark side of comedy
updated 3:36 PM EDT, Tue August 12, 2014

By tradition, Drama is represented by two masks: the happy face of the comic muse Thalia and her sad counterpart, the tragic muse Melpomene.
Comedic geniuses who left us too soon
updated 12:45 PM EDT, Tue August 12, 2014

He could do 'em all! Check out some of Robin Williams' best impressions.
Williams' wife: I am utterly heartbroken
updated 8:11 PM EDT, Mon August 11, 2014

Video: A statement from Robin Williams' wife confirms: "This morning, I lost my husband and my best friend."