(CNN) -- As a medical student who used humor to help his patients, Robin Williams' role in "Patch Adams" was touching and memorable.

But his laughter-as-medicine approach wasn't just limited to the silver screen. The kindness he brought to real-life patients, said their family members, was truly unforgettable.

In 2001, Kravit's nephew, David Buist, received a bleak diagnosis: hepatosplenic T-cell lymphoma. This aggressive form of cancer is so rare that, according to the National Institutes of Health, "standard treatment has yet to be established."

Buist, who was 24 years old at the time, met the devastating diagnosis with determination. "David said that he didn't want to just disappear," Kravit wrote in a CNN iReport submission, "and decided that he would help build a new Ronald McDonald house in New York before anything happened to him."

Kravit, who met Williams at a previous event, reached out asking for autographed memorabilia to help with the fund-raising effort.

Williams did that -- and much more.

Calls that made a difference

As Buist battled through the toughest months of his cancer treatment, Williams would call him. 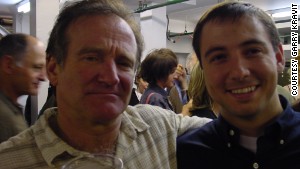 Williams and David Buist, who was suffering from a rare form of lymphomia, pose together backstage at 2004 performance.

"You can't get a better laugh than a Robin Williams laugh," he said.

After a year of treatment, Buist was discharged from New York's Memorial Sloan-Kettering Cancer Center, and Williams invited him and his uncle to a taping of a standup comedy special in New York City in 2004.

Williams meet Buist backstage after the show where they hugged and caught up for several minutes. "He didn't care about anything but David," Kravit said.

"I think he said to me backstage, 'my real job is helping people,'" Buist recalled.

Buist, who is 37 years old now, is in remission and married with children.

"He was a good person. He really tried to make people feel better. I am really sad he is gone," Buist said. "There is nothing like the power of laughter when you're feeling bad, and I wish that worked for him as well."

A day to remember 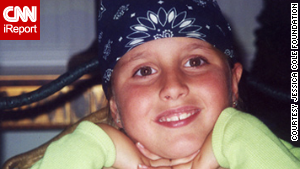 In 2004, Robin Williams met Jessica Cole, 13, who had an incurable brain tumor.

Mark Cole has a similar story.

He wrote to CNN iReport about the time Williams visited his daughter, who doctors said was terminally-ill.

"He made her feel very special all day; it was just one-on-one" Cole said. "He really wanted to spend time with Jessica."

That visit, also in 2004, came when his daughter Jessica had only weeks left to live.

Through The Make-a-Wish Foundation, she requested a visit with Williams. The 13-year-old loved the film "Mrs. Doubtfire."

But Jessica, stricken with a brain tumor, couldn't make the trip to see the actor; her health was too fragile.

So, the actor chartered a private plane to come to her Greensboro, North Carolina, home.

Given her medical state, the girl initially had trouble understanding who she was seeing, Cole recalled. But once Williams started with the "Mrs. Doubtfire" impressions, Jessica lit up.

"I couldn't believe it," he said. "I felt very privileged that he came to spend the day with her like that. It was the most moving thing I've ever seen in my life."

Cole said when he heard about Robin Williams death, "I cried for half an hour."

"You don't meet very many good people like that."

The actor's death Monday at age 63 was a stunning blow not just to his fans but for patients he brought smiles to. He was a long-time supporter of St. Jude Children's Research Hospital, appearing in multiple campaigns for the facility.

"Mr. Williams generously gave his time to raise awareness and funds for St. Jude and for our patients battling childhood cancer," the hospital said in a statement. "His humor brought bright smiles and laughter to our patients and families and his generosity deeply touched the hearts of all who knew him."

CNN's Dorrine Mendoza and Jareen Imam contributed to this report.

Robin Williams, who first made America laugh and eventually touched "every element of the human spirit" in a remarkable range of performances, died at age 63.
Complete coverage

See our complete coverage as we remember comedian and actor Robin Williams.
The world according to Robin

Watch and remember the career of Robin Williams by revisiting some of his best moments from stage, film, and television.
Comedic actor Robin Williams
updated 10:02 PM EDT, Sat October 25, 2014

Robin Williams gave a lot of advice and his words carry as much power now as they ever did.
Robin Williams: Full of talent, full of demons, full of heart
updated 12:33 PM EDT, Thu August 14, 2014

Of all the things to say about Robin Williams, the truest may be this: He made people smile.
Entertainment world mourns passing of Williams
updated 4:59 PM EDT, Tue August 12, 2014

A collection of some of the beloved comedians' more colorful stand-up moments throughout the years.
Behind Williams' genius was the great comic Jonathan Winters
updated 6:00 PM EDT, Wed August 13, 2014

Before Robin Williams, there was Jonathan Winters.
I met Robin Williams: Your stories of the comic legend
updated 12:03 PM EDT, Mon August 18, 2014

Robin Williams was not only known for bringing laughter to so many throughout his career but for bringing compassion to his philanthropic causes as well.
Robin Williams: The man beyond the screen
updated 11:14 AM EDT, Wed August 13, 2014

Who was Robin Williams?
Williams leaves behind 4 films to be released
updated 4:22 PM EDT, Tue August 12, 2014

There didn't seem to be too much that Robin Williams couldn't do.
Robin Williams: King of talk show guests
updated 12:13 PM EDT, Tue August 12, 2014

There was never a dull moment when Robin Williams sat in the guest's chair. Here are some of the best.
Where to stream his essential performances
updated 5:33 PM EDT, Tue August 12, 2014

Robin Williams, who died Monday at age 63, was Peter Pan to some, Mrs. Doubtfire to others, and a beloved actor to many.
Robin Williams' beloved movie characters
updated 4:20 PM EDT, Tue August 12, 2014

Here's a look back at some of the more than 100 movie characters that actor Robin Williams brought to life.
7 Robin Williams movies that made your childhood
updated 8:00 AM EDT, Wed August 13, 2014

If there was any actor who could make the entire family laugh, it was Robin Williams.
Patients' families remember 'comedic Mother Teresa'
updated 2:13 PM EDT, Tue August 12, 2014

As a medical student who used humor to help his patients, Robin Williams' role in "Patch Adams" was touching and memorable.
Robin Williams and the dark side of comedy
updated 3:36 PM EDT, Tue August 12, 2014

By tradition, Drama is represented by two masks: the happy face of the comic muse Thalia and her sad counterpart, the tragic muse Melpomene.
Comedic geniuses who left us too soon
updated 12:45 PM EDT, Tue August 12, 2014

He could do 'em all! Check out some of Robin Williams' best impressions.
Williams' wife: I am utterly heartbroken
updated 8:11 PM EDT, Mon August 11, 2014

Video: A statement from Robin Williams' wife confirms: "This morning, I lost my husband and my best friend."