The historic visit is also a nod to Catholicism's shifting demographics as an increasing number of believers come from Latin America, Africa and Asia instead of its historic stronghold in Europe.

"The Pope's visit to South Korea is the first part of a very intelligent opening to Asia," said Lionel Jensen, associate professor of East Asian Languages and Cultures at the University of Notre Dame. "The Pope's presence is a powerful symbol of the Vatican's recognition that it is in Asia and Sub-Saharan Africa that the church is growing most prominently." 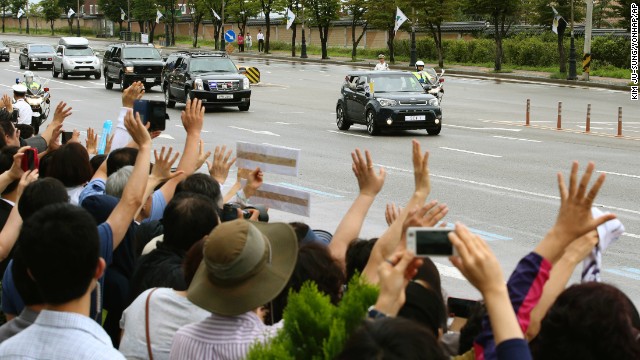 Pope Francis waves to crowds from inside a vehicle near Seoul Air Base in Seongnam on Monday, August 18. The Pope's trip to South Korea marks the first papal visit to the country since Pope John Paul II went there 25 years ago. 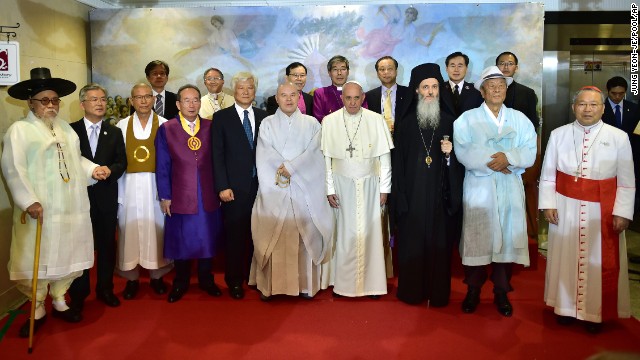 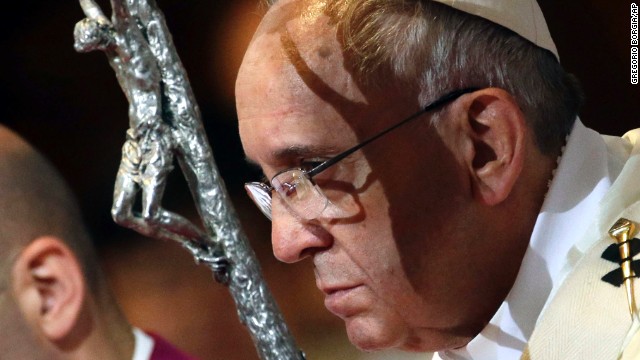 The Pope celebrates a Mass for Peace and Reconciliation in Seoul on August 18. 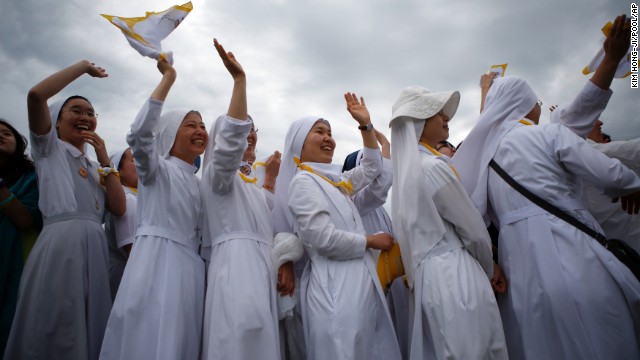 Nuns greet Pope Francis for a Mass in Haemi on Sunday, August 17. 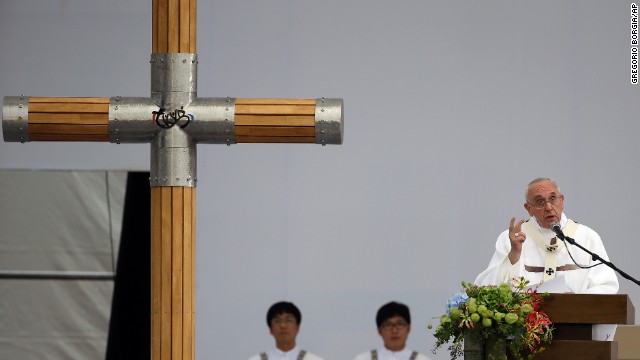 Francis delivers his message as he celebrates Mass in Haemi on August 17. 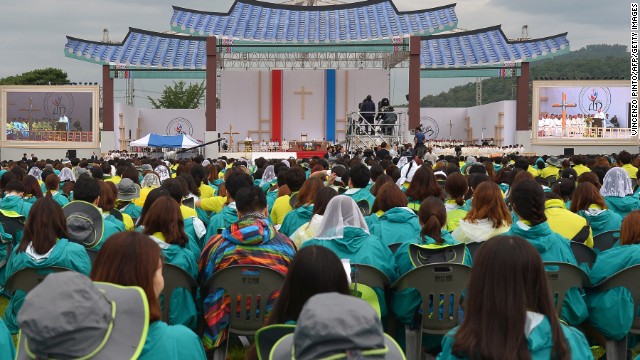 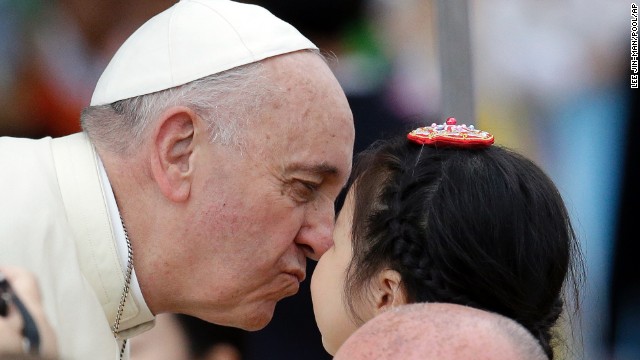 Pope Francis kisses a child on August 17 upon arrival for the mass. 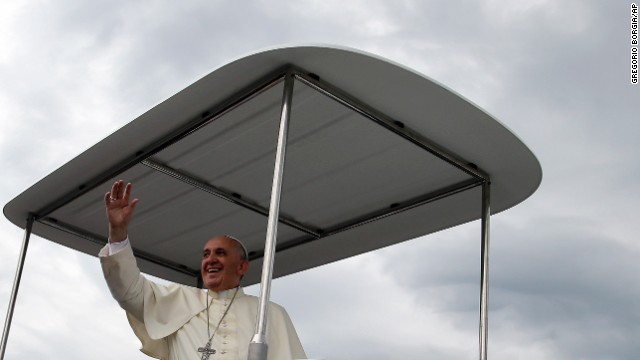 Pope Francis blesses the faithful on August 17 as he arrives for Mass. 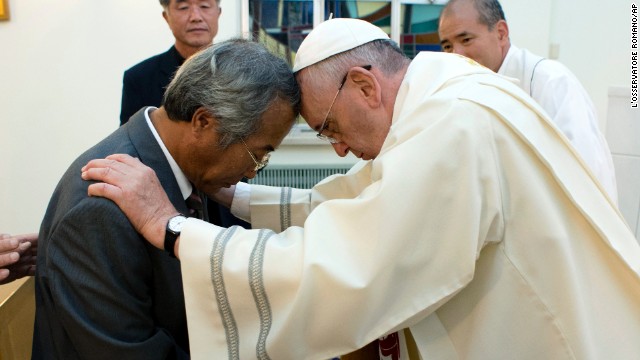 In Seoul on August 17, Pope Francis greets the father of one of the victims of the sinking of a South Korean ferry that killed more than 300 people, most of them high school students, earlier this year. 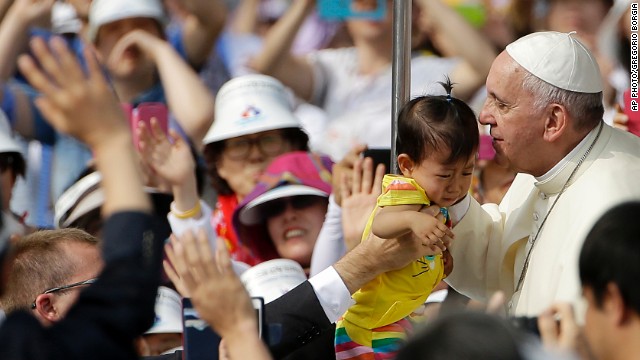 Pope Francis kisses a baby as he arrives to celebrate Mass and the beatification of Paul Yun ji-Chung and 123 martyrs, at Gwanghwamun Gate in Seoul on Saturday, August 16. 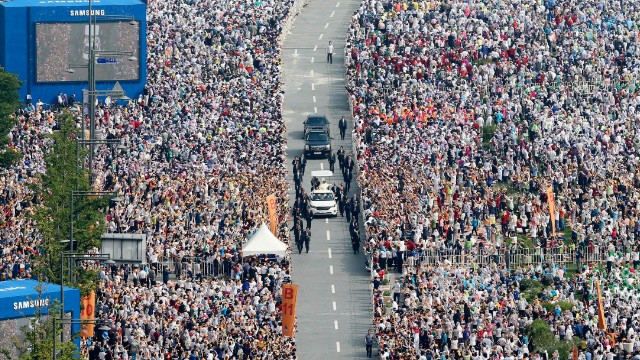 Thousands of people line a street as Pope Francis arrives for a Mass to beatify Korean martyrs on August 16. 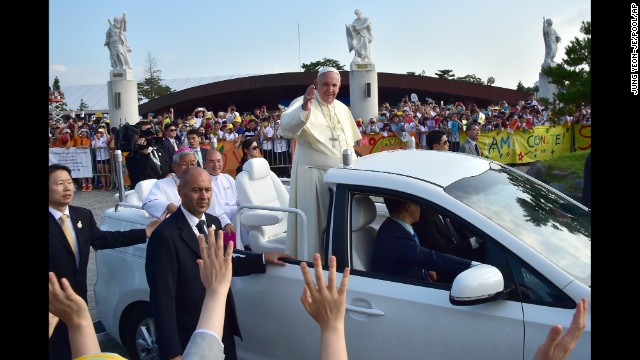 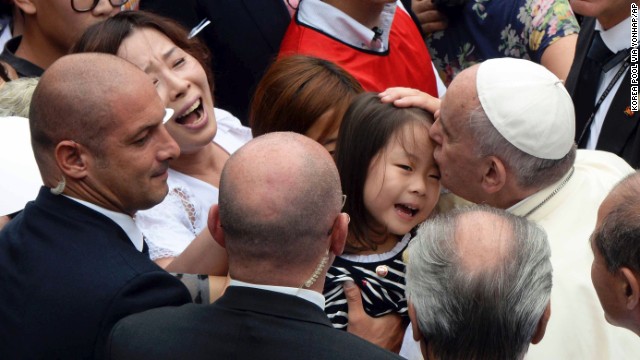 The Pope kisses a child at the Mass of the Assumption of Mary at Daejeon World Cup stadium in Daejeon, South Korea, on August 15. 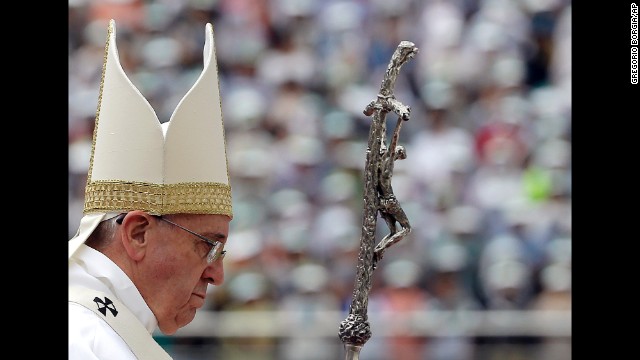 Pope Francis gathers with thousands of the faithful to celebrate Mass in Daejeon, South Korea. 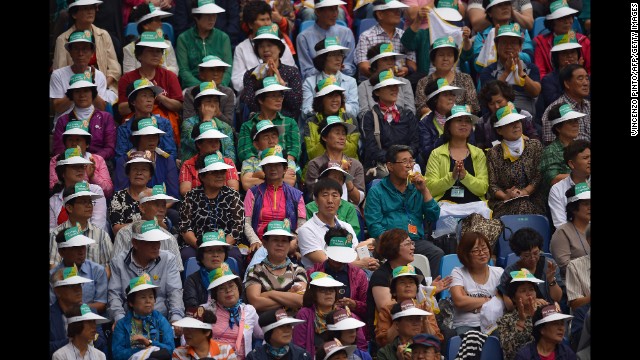 Thousands of believers sit in Daejeon World Cup Stadium for Mass with the Pope on August 15. 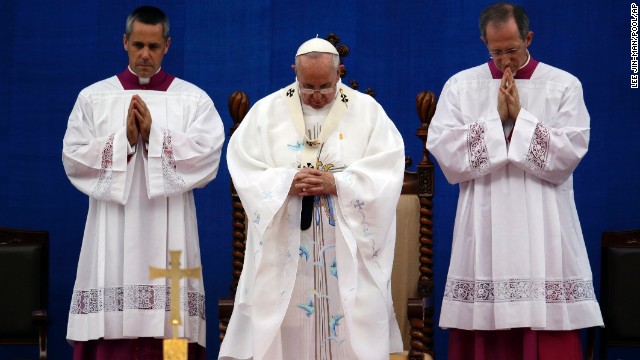 Pope Francis prays during the Mass of the Assumption of Mary on August 15. 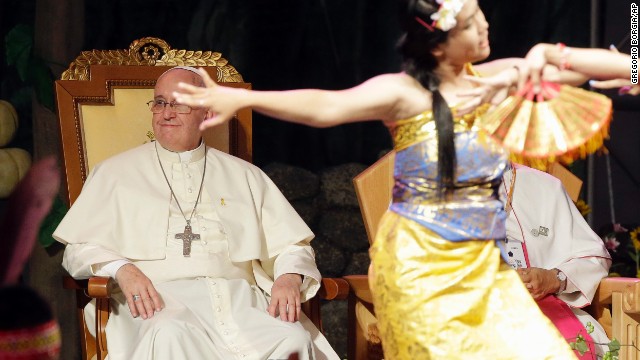 Pope Francis enjoys a traditional Korean dance as he meets with young believers at the Solmoe Shrine in Dangjin. 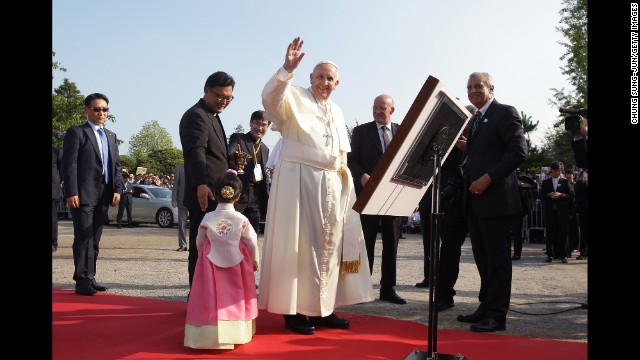 Pope Francis waves to a crowd during his visit to the birthplace of Saint Kim Taegon Andrea, who was the first Korean-born Catholic priest and is the patron saint of Korea, at the Solmoe Shrine for Korea's Catholic martyrs on August 15. 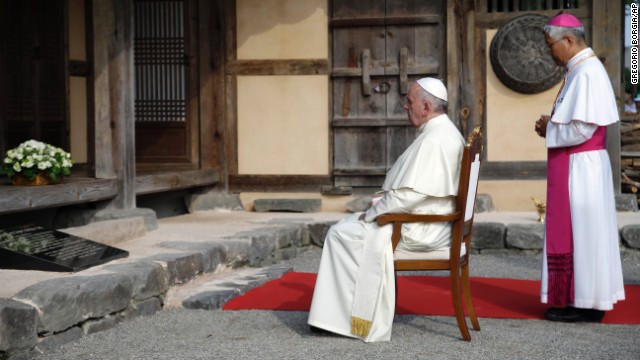 Pope Francis prays with Daejeon Bishop Lazarus You Heung-sik in front of the birthplace of Saint Andrea Kim Dae-gun in Dangjin. 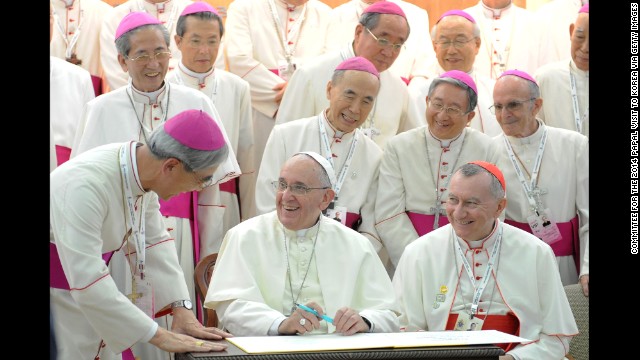 Pope Francis laughs with bishops as he signs a guestbook Thursday, August 14, at the headquarters of the Korean Episcopal Conference in Seoul, South Korea. 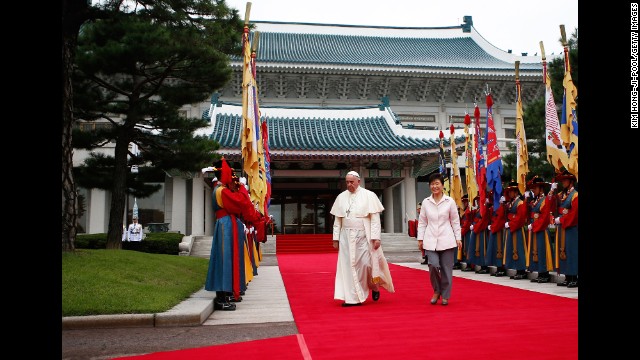 Pope Francis walks with South Korean President Park Geun-hye before a welcoming ceremony at the presidential Blue House in Seoul on August 14. 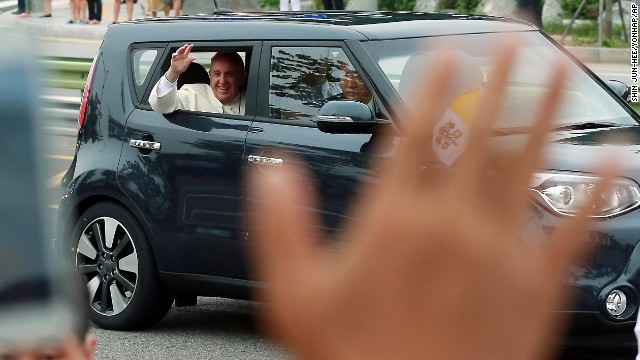 Pope Francis waves to a crowd after his arrival in Seongnam, South Korea, on August 14. 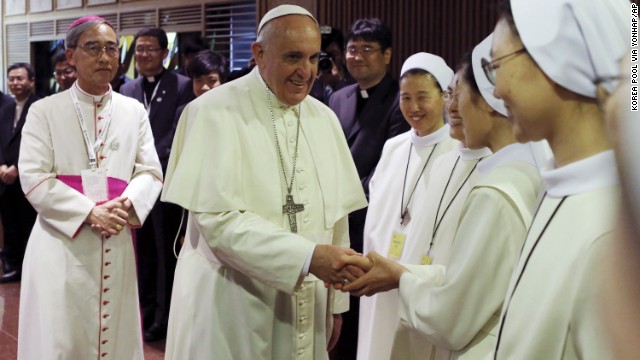 The Pope shakes hands with a nun in Seoul on August 14. 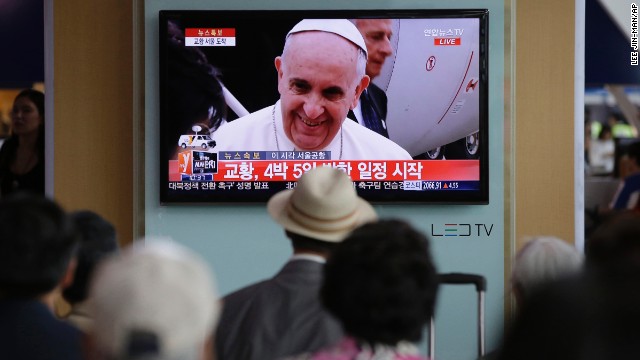 People watch Pope Francis' arrival on a television at the Seoul Railway Station. 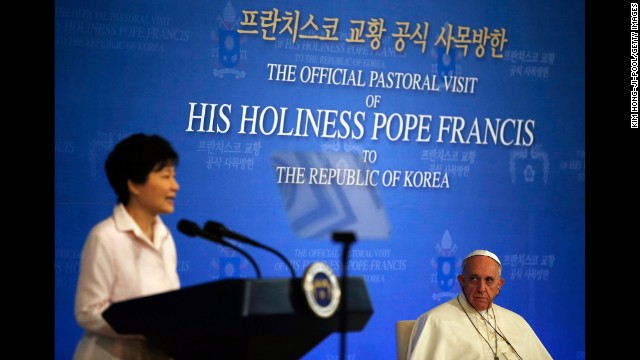 Park delivers a speech during a news conference with the Pope in Seoul. 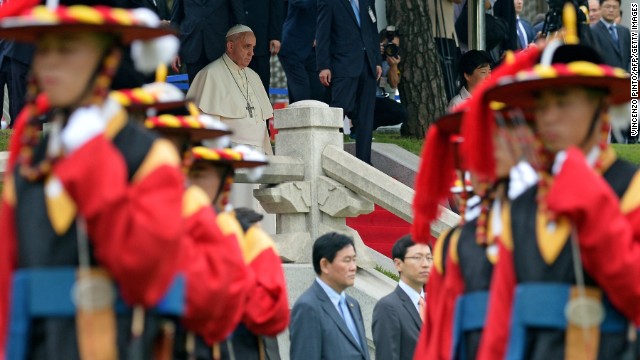 Pope Francis walks down stairs during a welcoming ceremony in Seoul. 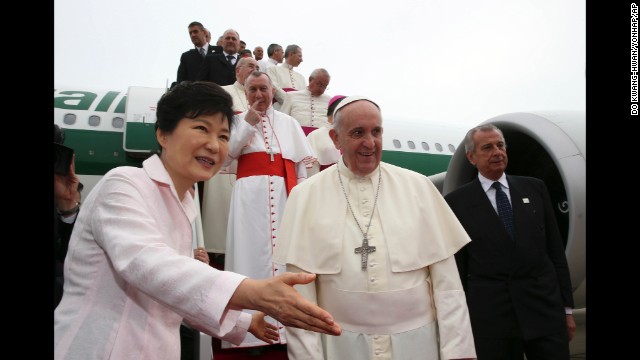 During his packed, five-day visit to South Korea, the Pope will beatify 124 Korean martyrs, help celebrate the 6th Asian Youth Day, which is a gathering of Asian Catholic youth, and hold Holy Mass for Peace and Reconciliation, expected to be aimed at prayers for peace, including South and North Korean relations.

North Korea fired five short-range projectiles into the sea east of the Korean peninsula, beginning about an hour before the Pope's landing in Seoul, the South Korean Defense Ministry said.

The Korean peninsula remains a divided one. One of the Pope's missions is to "go to Korea and pray for the reconciliation and peace," said Vatican spokesman, Padre Federico Lombardi.

Pope Francis is expected to meet South Korean president, Park Geun-hye, as well as hold Mass with family members of the victims of the sunken Sewol ferry and comfort women, who were forced to sexual slavery by the Japanese in World War II, in attendance.

Read: Why is the Pope going to South Korea?

A message of simplicity

Catholicism's growth in South Korea has been incremental, rising from 5.2 million Catholics in 2005 to 5.4 million in 2013. That represents a significant slowdown from the growth rate of 70% seen in the 10 years to 2005. Just 10.4% of South Koreans are Catholic; most are Buddhist or Protestant.

In a country that is entrenched in the latest technologies and also home to one of the biggest average household debts, Pope Francis is expected to bring his usual message of simplicity and humility. The Pope had requested the smallest car possible for his trip.

Read: South Korea, the church of the future?

"Korea has experienced rapid economic and social development, and now is struggling with the conflicts surfacing from increased social polarization," wrote Rev. Peter Kang U-il, the President of the Catholic Bishops' Conference of Korea. The Korean Church must try to follow spiritual growth, rather than pursue material growth, he wrote.

Read: 10 things South Korea does better than anywhere else

As I begin my trip, I ask you to join me in praying for Korea and for all of Asia.

After his morning arrival, the Pope is expected to attend a private Mass and then proceed to the Blue House, which is the South Korean president's residence, where he is to meet with Park and other South Korean officials.

Pope to couples: Have kids, not pets

He meets with Korean bishops at the Korean Episcopal Conference.

Pope Francis will lead a Mass at the Daejeon World Cup Stadium. The stadium, built for the 2002 World Cup games, can accommodate up to 42,000 people.

As part of efforts of Asian Youth Day, he will lunch with young people at a seminary and meet with more youth at a shrine for Catholic martyrs.

South Korea's early Catholic history is marked by fierce persecution by the government. Catholicism was viewed as a foreign influence and also a threat to Confucianism, which was the governing social order.

The Catholic Church estimates about 10,000 believers died in the persecutions beginning in late 18th century. Those who refused to denounce their faith were executed. Many of them were tortured and beheaded. One of the most infamous execution sites is Seo So Mun, now located in Seoul.

With his message of embracing the marginalized, the Pope is scheduled to visit Kkottongne, which means flower village. The biggest welfare facility run by the Korean Catholic Church, the program works with homeless, disabled people and substance addicts. The facility includes an adoption center for abandoned disabled infants.

After meeting with Asian bishops from the region, Pope Francis is expected to hold the closing Mass for Asian Youth Day, which is expected to be attended by 2,000 young people.

After meeting with religious leaders, Pope Francis holds a final Mass for Peace and Reconciliation at Seoul's oldest cathedral, Myeong-dong Cathedral, in Seoul.

Pope Francis is expected to hold a brief farewell ceremony before boarding a flight back to Rome.

READ: Why the Jesuits (including Pope Francis) are on frontlines of faith

The Pope unleashes a blistering critique of the Vatican bureaucracy criticizing its "illnesses" and likening the church to "a sick body."
Pope plays key role in Cuba deal
updated 5:32 PM EST, Wed December 17, 2014

Pope Francis celebrated his birthday with a major geopolitical wish granted: The end of frozen relations between the U.S. and Cuba.
Pope Francis on modern slavery
updated 11:59 AM EST, Tue December 2, 2014

Pope Francis said that modern slavery is a "crime against humanity" and is "unfortunately becoming worse and worse every day."
Pope to make first U.S. trip next fall
updated 5:31 PM EST, Mon November 17, 2014

Pope Francis is to make his first trip to the United States as the head of the Catholic Church next September.
Vatican proposes shift on gays, lesbians

Using his strongest language to date, Pope Francis told Italian Mafia members that they are excommunicated from the Catholic Church.
No topic off limits
updated 12:45 PM EDT, Fri June 20, 2014

Pope Francis reveals he prefers not to use a bulletproof Popemobile because it is a glass "sardine can" that walls him off from people.
Abbas, Peres pray with Pope for peace
updated 12:58 AM EDT, Mon June 9, 2014

Palestinian Authority President Abbas and Israeli President Peres committed themselves to the quest for peace in the Middle East with Pope Francis.
Pleasing the Papal palate
updated 2:46 PM EDT, Fri May 23, 2014

As the Holy Land prepares for a papal visit, Ivan Watson speaks to the man preparing to honor the pontiff with his food.
How to measure the 'Francis effect'
updated 12:31 PM EDT, Thu March 13, 2014

Not a jot of doctrine has changed in the year since Francis became Pope. But there's more than one way to measure his impact.
Pope Francis appoints 19 new cardinals
updated 10:01 AM EST, Sat February 22, 2014

Pope Francis created 19 new cardinals in a ceremony in the Vatican's St. Peter's Basilica -- the first such appointments since he was elected pontiff.
One year of Pope Francis
updated 9:36 AM EDT, Thu March 13, 2014

"The spring evening in which Pope Francis was elected is an apt symbol of the beginning of his papacy and the years that will follow," writes a priest.
Photos: Pope Francis' first year
updated 4:10 PM EDT, Wed March 12, 2014

Pope Francis is being painted as a humble and simple man, but his past is complicated and tinged with controversy.