Apparently This Matters: The beauty of big trucks 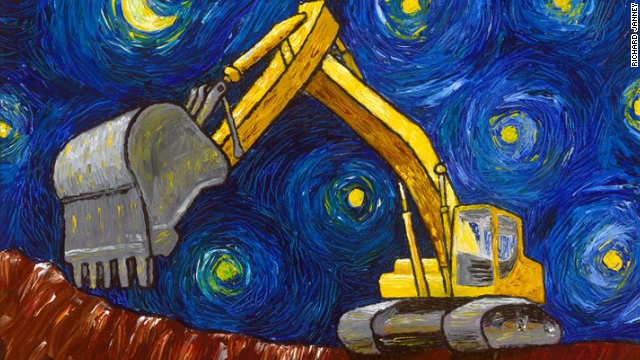 That's what I asked the garbage man one afternoon many years ago when we had Truck Day outside Cherokee Elementary.

At least I think it was Truck Day. There were lots of trucks. And our teachers encouraged us to look at them and ask questions.

So, I'm pretty sure it wasn't sex-ed.

Anyway, the garbage man smiled and answered my question. "Well, this makes the mechanical arm go down. Here, try it."

Me at the helm of a steel hydraulic grabbing device in the vicinity of small children. What could possibly go wrong?

I pulled the lever. Things moved. Noises were made. Nothing went wrong.

And to this day, it's pretty much the highlight of my life. I should've been a garbage man. Instead I became a journalist.

(I repeat: I should've been a garbage man.)

Because big trucks are awesome. Especially when you're a kid.

Richard Janney knows all about this.

The 42-year-old legal recruiter from the suburbs of Chicago has two boys, 9 and 3. And the youngest is completely obsessed with trucks.

Janney explains that his little one is over the moon when it comes to big equipment. "Like, stop and pull over and watch an active construction site for 10 or 20 minutes kind of excitement."

So, he does. That's just being a good dad.

But one day, back in early July while taking a roadside pause with his son, Janney looked out upon the broken land and saw an excavator in a whole new light. In this great, massive machine he suddenly saw beauty.

(Bad comparison. I don't know what just happened there.)

As Janney looked out over the construction site with this heightened appreciation for machinery, it was then that he decided he would go home and paint the excavator for his son. He could already picture it.

"I've always been obsessed with van Gogh," Janney says. "I had been trying to do paintings that emulated his style for about a year."

So, in paying homage to "Starry Night," he painted "Quarry Night."

And it was magnificent.

Janney posted an image of his painting online and, immediately, people were enthusiastic. Hundreds asked him if they could buy prints.

Not bad for a former lawyer with largely untapped artistic ability. You see, for years, Janney was a litigator for a big firm. And he hated it.

"I was willing to crawl through a sewer pipe like Tim Robbins did in Shawshank Redemption just to get out," he said.

I can't even imagine. Or maybe I just don't want to. But he made it out.

"I have a lot more time for my family, which is why I'm able to pull over and watch construction equipment when my boys see one in action. We also watch trains a lot."

(Note: These are real things you can see when you stop clicking through cat videos on your iPad. However, be warned that doing so requires leaving the house and wearing pants. Just FYI.)

Of course, getting out of a busy law career also allowed Janney more time to further explore this passion for art, despite the fact that he has no formal training.

When he was younger he drew a lot, eventually delving into the world of cartoons. In college, Janney even penned a strip called "Pierre the French Guy." That one almost got syndicated. 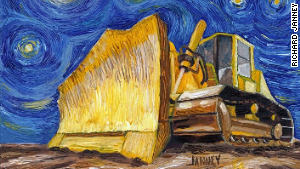 Painting came much later, about 10 years ago. Which ultimately led to "Quarry Night."

Soon after that, Janney brushed another truck-inspired masterpiece: "Vincent Van Dozer." Once again he had an online hit.

And it was another fine example of hidden artistic talent being discovered on the Internet.

In all, it's a small body of work -- there are only two truck paintings so far -- but Janny's already getting commissions from construction companies, engineers, and manufacturers.

He says, "One guy told me that he was so happy to see that someone else saw those machines as works of art."