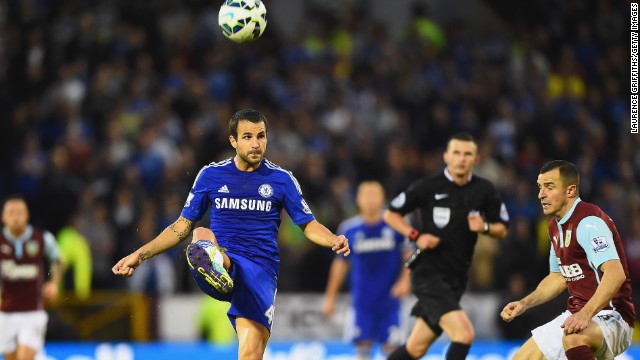 (CNN) -- Chelsea manager Jose Mourinho said last week his Blues were title contenders in the Premier League. With the amount of money Chelsea continues to spend on players, many would say he was stating the obvious.

And while Chelsea didn't play a fellow title contender Monday in its season opener, the club's display would have done little to alter Mourinho's view.

"I think overall, (we had) very good control of the game and some moments in the quality and style we want to play," Mourinho told Sky Sports.

Burnley's manager Sean Dyche suggested his newly promoted side couldn't match the budget of some teams in the Championship. Chelsea, though, wasn't taking the Clarets lightly -- they upset Manchester United at home early into the 2009/2010 campaign and earned another stay in the top flight last April thanks partly to a stingy defense.

"We dropped too many points away from home last year to the lesser sides," Chelsea defender John Terry told Sky. "We had to come here and fight and want it more than them and I think we had that. But more in abundance we had plenty of possession and quality play."

Mourinho has never been shy to tinker with his lineup, and in the off-season out went Chelsea greats Frank Lampard and Ashley Cole. Another stalwart, Petr Cech, was the backup to Thibaut Courtois -- who returned from his loan spell at Atletico Madrid -- on Monday.

But Terry, dubbed 'Mr. Chelsea,' completed the 90 minutes for Chelsea in the heart of the defense and he was joined on the pitch by much loved striker Didier Drogba when the latter came on with less than 10 minutes remaining.

Fabregas moved to Chelsea following a mostly unfruitful stint at Barcelona, and having previously played for Arsenal, his adjustment to the pace of the Premier League was seamless.

He played a role in all three Chelsea goals.

"He really was the maestro," said Mourinho. "He controlled the tempo of the game. He was the man that dictated the speed, intensity and direction of the game."

Fabregas engineered the pass of the evening when he set up German World Cup hero Schurrle in the 21st minute to give Chelsea a 2-1 advantage. Only seven minutes earlier, Scott Arfield's thumping finish handed Burnley a dream start.

Costa proved in La Liga that he was one of the best finishers around, and he didn't miss from close range in the 17th minute after the ball had come off the post. Fabregas' fellow Spanish international is being counted on to score in abundance in the wake of Chelsea's strikers struggling last term.

Gullit: Mourinho will return to Chelsea

Costa, though, received a yellow card for diving, despite replays showing he was clipped by goalkeeper Tom Heaton.

"His play, movement and interaction with Eden (Hazard) and Schurrle and Oscar was very, very good," said Mourinho. "I feel very sorry for him because it was a penalty and never a yellow card."

Ivanovic, a defender, converted from a Fabregas corner in the 34th minute as Chelsea became the only team in the first round of fixtures to find the net three times.

Chelsea eased up in the second half and Burnley elevated its game -- Courtois pulled off a great save to deny Arfield a second in the 49th minute.

But Chelsea cruised to three points to match Manchester City, the defending champion and Mourinho's major rival this season.