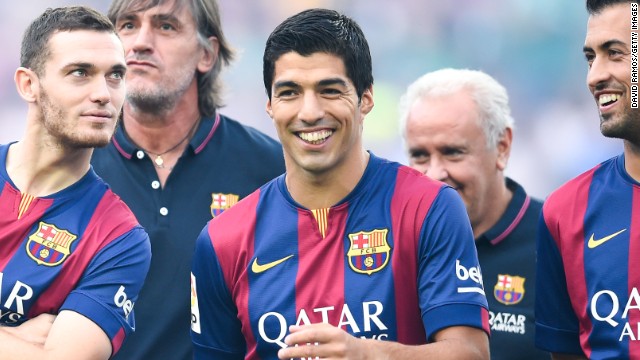 (CNN) -- Cleared to take part in football-related activities last week by the highest sports court in the world, Luis Suarez was unveiled to Barcelona fans amid chants of "Suarez, Suarez, Suarez" on Monday.

The talented -- and controversial -- forward took to the pitch at the Camp Nou alongside the rest of his teammates ahead of the Joan Gamper Trophy, an annual friendly that serves as Barcelona's curtain raiser to the new season. This time, Barcelona faced Mexico's Leon.

After most of Barcelona's regulars entered the pitch -- including Neymar -- its new signings were rolled out and that included Suarez, who joined from Liverpool for a reported fee of about $130 million in July.

Later, four-time world player of the year Lionel Messi made his way onto the field as one of four club captains.

Suarez didn't start the game, named on the subs' bench, but he came on with about 15 minutes remaining in Barcelona's 6-0 victory. By that time, Messi and Neymar departed.

The Uruguayan was allowed to feature in the festivities by the Court of Arbitration for Sport, which partially overturned a ban given to Suarez by FIFA for biting Italian defender Giorgio Chiellini at the World Cup.

It was the third time Suarez bit an opponent during a game, the other two coming when he lined up with clubs Liverpool and Ajax.

While CAS upheld his four-month suspension from competitive action, it said he could embark on football-related duties, like playing in friendlies, training and getting involved in promotional activities. Suarez is expected to make his competitive debut against fiercest rival Real Madrid in late October.

Barcelona is counting on the attacking triumvirate of Messi, Suarez and Neymar to reverse a poor, by its standards, 2013/2014.

The club lost the Kings Cup final to Real Madrid, fell in the Champions League quarterfinals to Atletico Madrid and finished second to Atletico in La Liga.

Barcelona was also hit with a transfer ban over two transfer windows relating to the "international transfer of minors," although the ban has been lifted while Barcelona appeals.