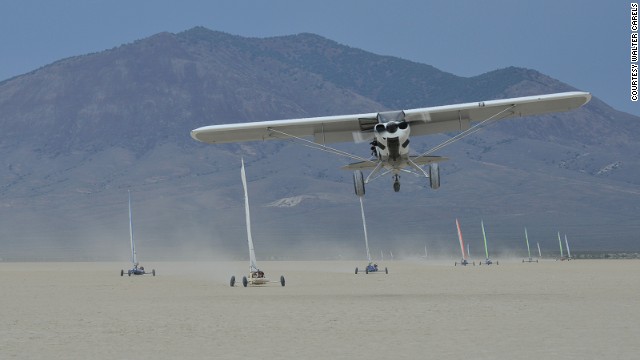 Is it a boat? Is it a car? In fact, it's a little bit of both. Welcome to the Landsailing World Championships, held in July in the sweltering Nevada desert. 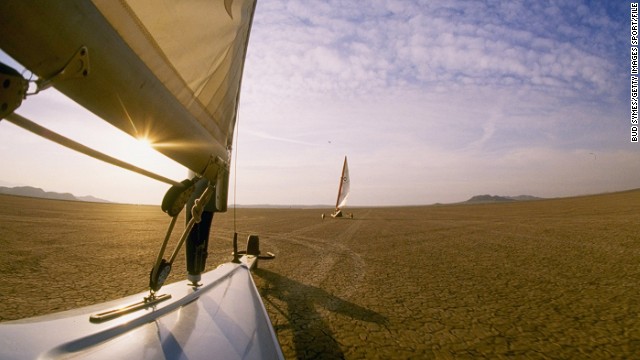 Over 170 "sailors" from 15 countries converged on the spectacular dried lake-bed of Smith Creek for this year's competition. 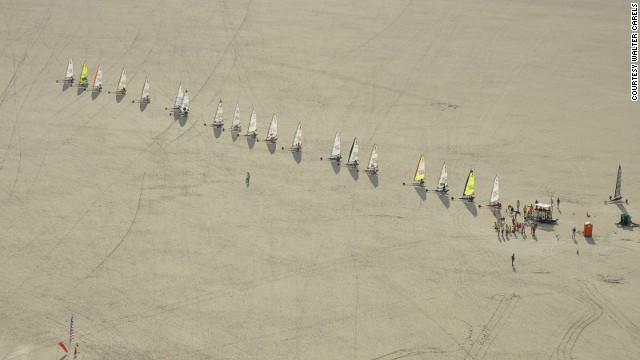 "It just amazes me how flat this place is," says racer Lester Robertson. "It just goes on seemingly forever. I really love the beauty and the solitude. And you get to go out on boats, wind-powered boats that just wail along." 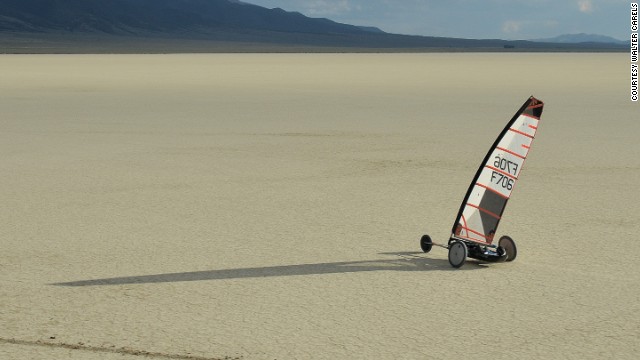 Situated around 30 miles from the tiny settlement of Austin, Smith Creek appears like a scorched land that time forgot. 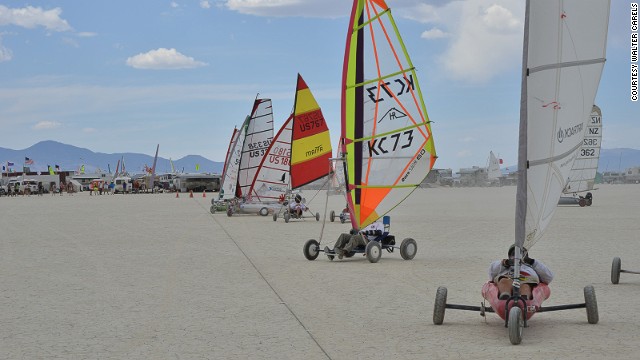 Over the past 40 years, the event has evolved from an amateur pastime with pioneers trying out their models to a world sport with influences from gliding, motorsport, sailing and even the America's Cup. 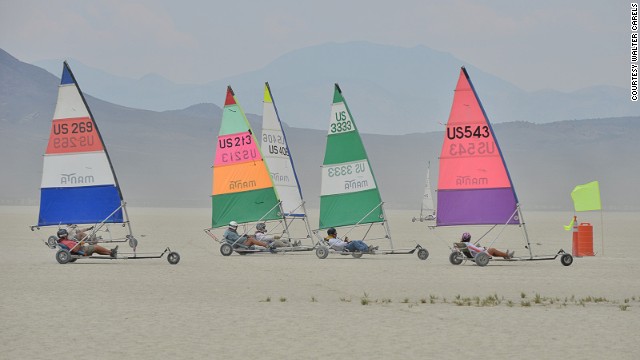 The surreal machines vary greatly depending on the class they're competing in. From basic buggies with sails... 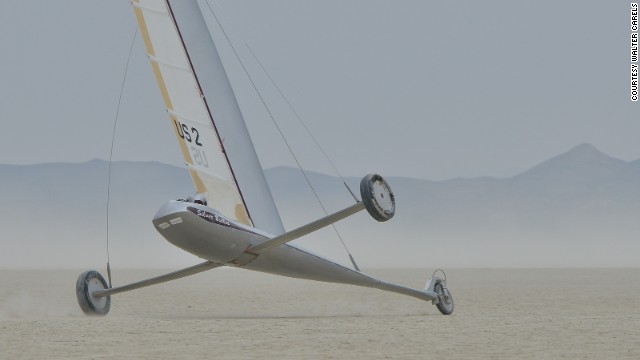 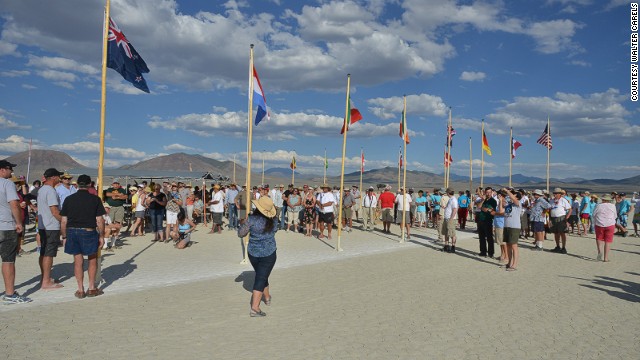 Landsailing enthusiasts stay up late into the evening, tinkering with their speedy designs. "The amount of time you spend in what I call a 'dirt boat coma' with a glazed look in your eye, thinking about your next great innovation and hoping it works..." says racer John Eisenlohr. 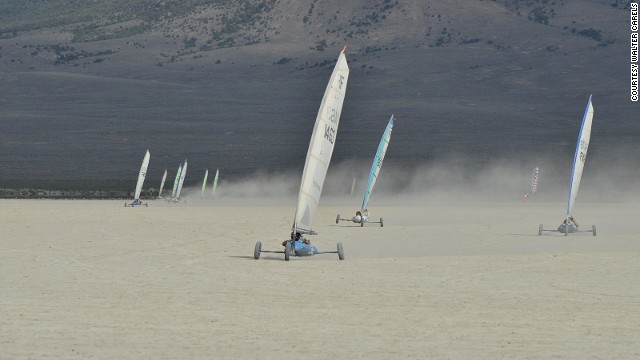 The most advanced craft can hit speeds of 100 miles per hour. 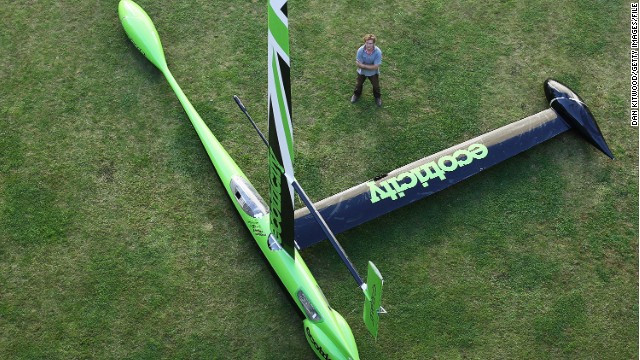 In 2009, Briton Richard Jenkins broke the speed record, hitting 126 mph in his Greenbird machine (pictured), not far from Smith Creek. He spent a decade working on the design, saying: "I can't believe in hindsight that I actually spent so much time trying to do it. I guess I was kind of focused on the result, and didn't really think about the time or the place." 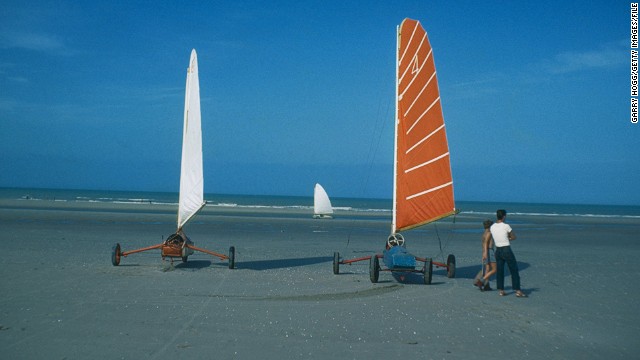 Landsailing isn't just restricted to deserts. Here, enthusiasts test out their designs on a European beach in the 1970s. 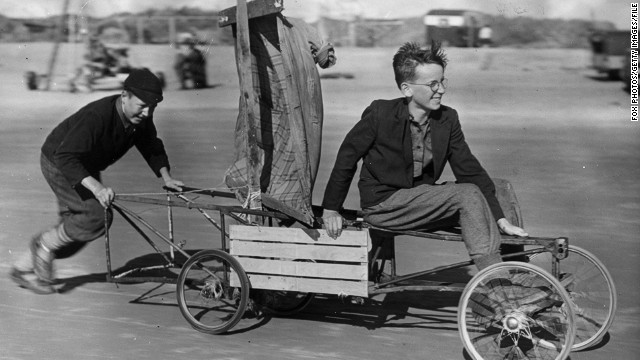 Here British youngsters in the 1950s go for a spin in their makeshift vehicle -- an old pram with a raincoat for a sail. 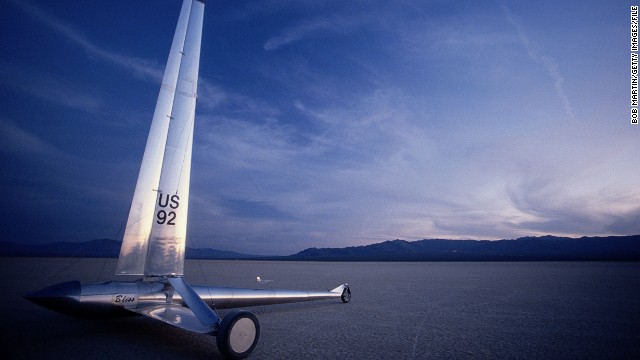 (CNN) -- Over 300 miles from the nearest ocean, competitors in one of the world's fastest sailing races are battling against a moody wind.

A small army of boats -- if you can call them that -- carve across the Nevada desert. A stream of sand billows behind, caking each competitor's face in fine, white grit.

"It's like Mother Nature has her foot on the throttle," says Russ Foster, who has been racing these peculiar yachts-on-wheels since the 1970s.

"The speeds that you go at -- sometimes 100 miles per hour -- means that you really need to stay on top of it or you could have a major accident," he tells CNN's Mainsail show.

"But that's part of the challenge."

The physics of land sailing

How to master land sailing

Sailing in the desert

Each year the dried lake-bed of Smith Creek is transformed into a fantastical racetrack for the Landsailing World Championships.

Over 170 "sailors," from countries as far flung as Chile and New Zealand, converge on the dramatic landscape that stretches flat as a mirror beneath the sweltering summer sun.

"When we first came through the mountains, we saw these beautiful big rocks, and the west end of the lake was just glass smooth," competitor Rod Eicholz says of the spectacular setting.

"So smooth you can actually see the reflection of your boat on the dirt," adds fellow racer Kurt Smiley.

Situated around 30 miles from the closest town of Austin -- which has a population of just 200 -- Smith Creek appears like a scorched land on the edge of the world.

And when the temperamental wind whips up the sand, forcing spectators to shield their eyes and run for cover, you'd be forgiven for thinking these otherworldly sailboats were ghost ships on the horizon.

Competitors arrive in campervans loaded with their desert-racing machines, and work late into the evening tinkering with their speedy designs.

"You know what a sailboat is? Well it's kind of like that, but you're racing on dirt, with wheels," racer John Eisenlohr says matter-of-factly.

"The amount of time you spend in what I call a 'dirt boat coma' with a glazed look in your eye, thinking about your next great innovation and hoping it works..." he trails off with a faraway look. 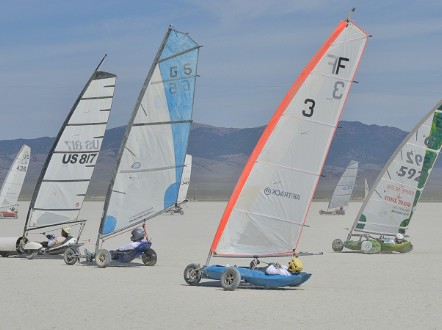 Fast and furious racing in the Nevada desert.
Walter Carels

In their everyday lives, these enthusiasts might be farmers or plumbers who work on their designs in garages back home.

The boats differ dramatically according to the class they're racing in -- from basic buggies with sails, to something resembling a futuristic bobsled with wheelie arms extended either side.

"Just after the start, you push, you run, you jump into the yacht, and you lay down completely, trying to be the lowest you can," explains racer J.P Krischer.

"You're hunkered down in the boat, you get nice and low, and you just get a beautiful view of the horizon," says fellow competitor Lester Robertson.

The high-tech designs have come a long way from the 1970s, when adventurous land sailors tested out their hybrid designs everywhere from European beaches to North African deserts.

"It's progressed from small, simple, two-framed vehicles, to pretty exotic ones with carbon fiber bodies and wing masts," explains Foster, who previously raced go-karts and catamarans.

"Then there are some classes which were designed in the 1970s and haven't changed at all."

The majority of world championship winners hail from the U.S. but there's also a good showing from European competitors, who are perhaps better used to racing on more rugged beach terrain. 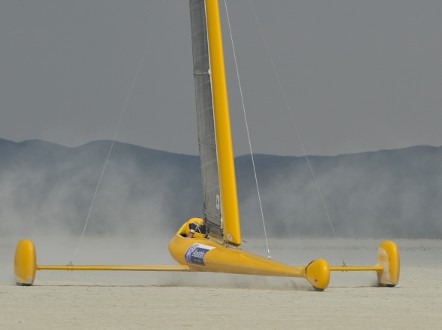 Today's aerodynamic designs have come a long way since the 1970s.
Walter Carels

"It's the speed. It's just so much fun to go that fast with the wind. You're in a boat, making all the decisions you're in control of everything.

Read: Superyacht expeditions to the ends of the earth

Debate: Will 'robo-ships' be the end of sailors?