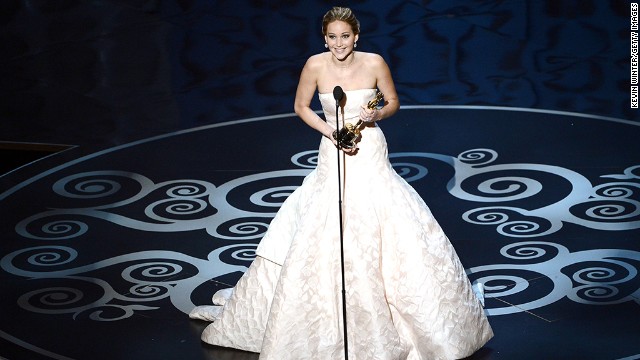 A rep for Jennifer Lawrence, who won an Academy Award in 2013 for her role in "Silver Linings Playbook," says photos of the actress posted online were stolen.
STORY HIGHLIGHTS

(CNN) -- A publicist for Jennifer Lawrence slammed the appearance of nude photographs of the Oscar-winning actress online Sunday as a "flagrant violation of privacy."

"The authorities have been contacted and will prosecute anyone who posts the stolen photos of Jennifer Lawrence," the publicist said in a written statement.

Posts on 4chan, Reddit, Twitter and Tumblr claim to include nude photographs of Lawrence, who won an Academy Award last year for her role in "Silver Linings Playbook."

"To those of you looking at photos I took with my husband years ago in the privacy of our home, hope you feel great about yourselves," actress Mary E. Winstead wrote.

"Knowing those photos were deleted long ago, I can only imagine the creepy effort that went into this. Feeling for everyone who got hacked."

Knowing those photos were deleted long ago, I can only imagine the creepy effort that went into this. Feeling for everyone who got hacked.

Some celebrities claimed the photos were doctored.

And actress Victoria Justice said pictures purporting to be her are fake.

These so called nudes of me are FAKE people. Let me nip this in the bud right now. *pun intended*

This isn't the first time celebrities have accused hackers of stealing risque photos.

A judge sentenced Christopher Chaney of Florida to 10 years in federal prison in 2012 for stealing nude photos, scripts and personal information from the e-mail accounts of 50 entertainment industry figures, including movie stars Scarlett Johansson and Mila Kunis and singer Christina Aguilera.

The first real case of a celebrity hacking attack was in 2005 when hackers logged into Paris Hilton's phone and stole photos of the reality star, Mikko Hypponen, chief research officer at computer security company F-Secure told CNN in 2011. Those hackers reportedly were able to break into Hilton's phone by correctly guessing the not-so-secret answer to her security question, which was "tinkerbell," the name of her pet Chihuahua.