Pyongyang, North Korea (CNN) -- The crowd cheers as the stars make their way to the ring for first pro-wrestling bout North Korea has seen in almost 20 years.

Back then, we're told the spectators thought the action was real.

Now, they're more savvy, and appreciative, clapping loudly as the former American stars execute their maneuvers during the two-day contest in Pyongyang.

He could also be alluding to the purpose of the trip, an attempt at "sports diplomacy" by Antonio Inoki, a Japanese former pro-wrestler turned politician.

He's organized the trip at a time of thawing relations between Japan and North Korea over the issue of abductions of Japanese citizens in the 1970s and '80s. Recent talks opened the door for further investigations by North Korea and a report is expected in the next few weeks.

The behind-the-scenes diplomacy is a long way from the public spectacles staged during this mixed martial arts festival.

The stars of the show -- including former NFL star Bob "The Beast" Sapp -- join arm-wrestling and tug-of-war competitions with the Pyongyang locals, some who seem more than a little bemused.

International media has joined the tightly-controlled tour, which took us from the birthplace of the nation's founder, Kim Il Sung, to the pet projects of its current leader, Kim Jong Un.

A bus ride seemed to take us back in time as we passed fields where locals where working, tending the soil with their hands.

Our destination was a country club where, for the equivalent of $10 an hour, locals can ride horses in an indoor arena. It's a past time only for Pyongyang's elite. The country's per capita income is estimated to be around $1,000 to $2,000 a year, putting such pursuits out of reach of most people.

However, outside Pyongyang there's a place where anyone can see the country's most impressive monuments, without having to visit each one.

It's a theme park that displays North Korea's landmarks in miniature. Many of them could be found in Pyongyang. Indeed, visitors could even see the real-life Tower of Juche from the park.

The original, built on the shore of the River Taedong, is named after the political ideology formed by the country's Eternal President Kim Il Sung, that "man is the master of everything and decides everything." 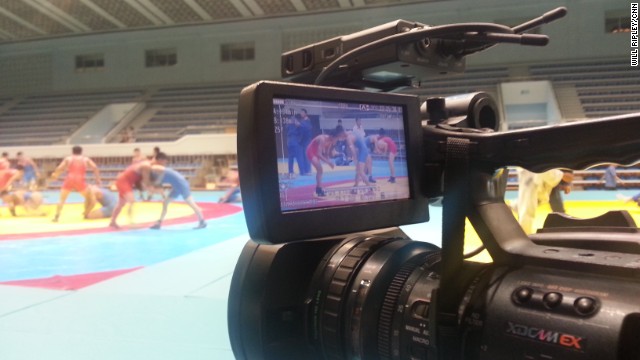 CNN's Will Ripley is in Pyongyang. Here are his photos. A sight the DPRK wants to show the world: A massive sports village where North Korea athletes train. 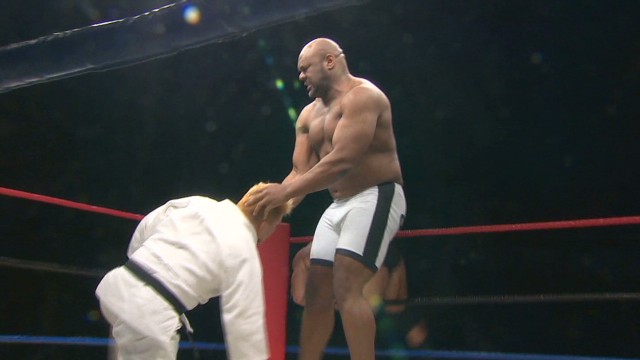 Stars of the show include former NFL star Bob "The Beast" Sapp. 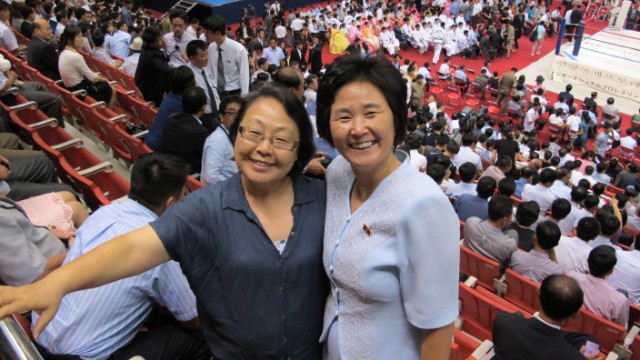 The woman on the left is a blogger living in South Korea and the woman on the right lives in North Korea. Both attended a pro-wrestling festival in Pyongyang. 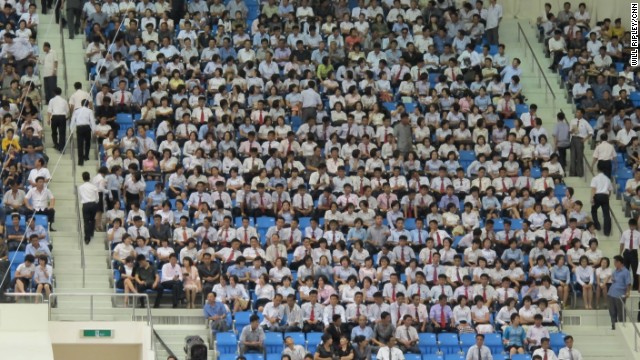 As evidenced by the Pyongyang crowd, most North Koreans dress up for sporting events. 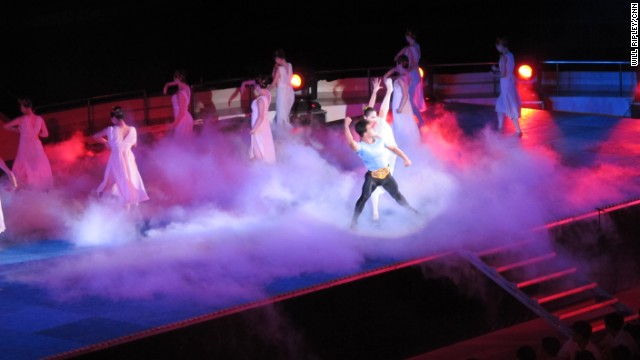 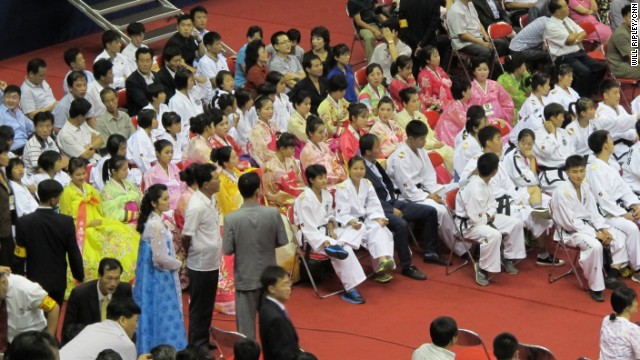 North Korean dance and tae kwon do students prepare to perform for the crowd of 13,000 at the wrestling festival. 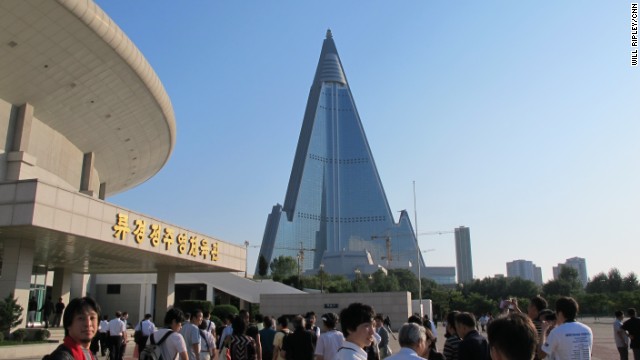 The 105 story Ryugyong Hotel sits unfinished 27 years after construction began in 1987 and was halted by the North Korea economic crisis of 1992. The exterior was completed in 2011 but the hotel has yet to open. 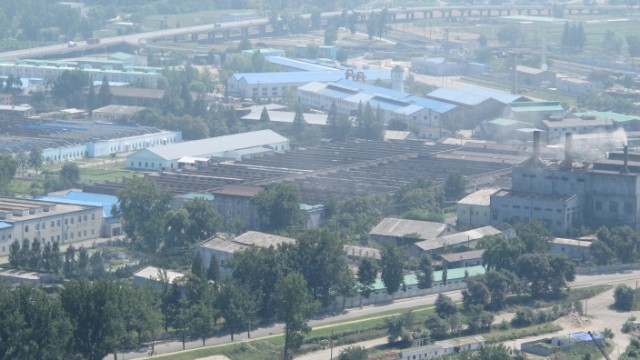 An area of Pyongyang visible from the Yanggakdo International Hotel, but off-limits to most foreigners. 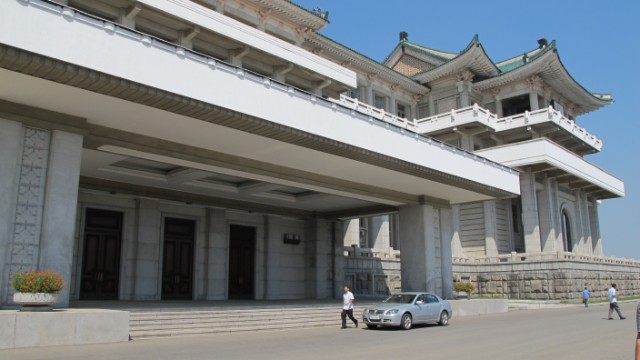 The front doors of the Grand People's Study House in Pyongyang. 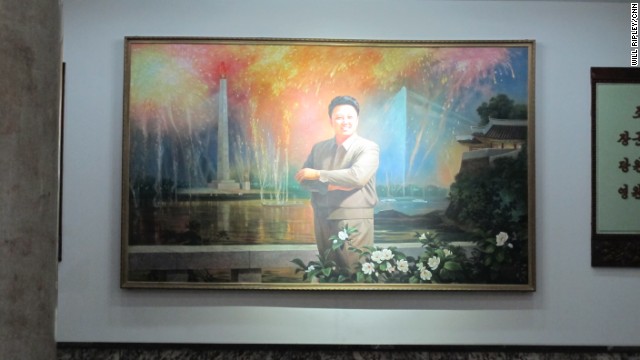 A portrait of the late leader Kim Jung Il at the Grand People's Study House in Pyongyang. 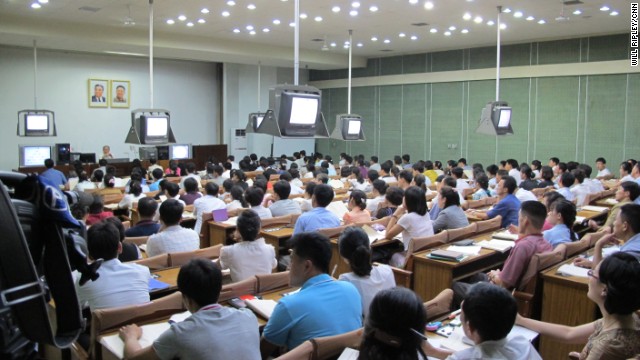 North Koreans in an English lecture at the Grand People's Study House. 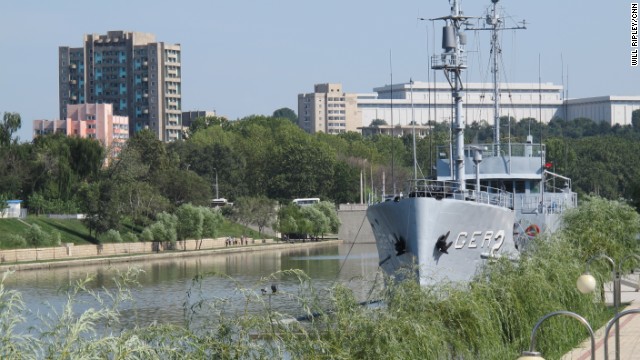 The North Korean military captured the American ship USS Pueblo in 1968. The US Navy denies North Korea's claims that the ship crossed into DPRK waters. 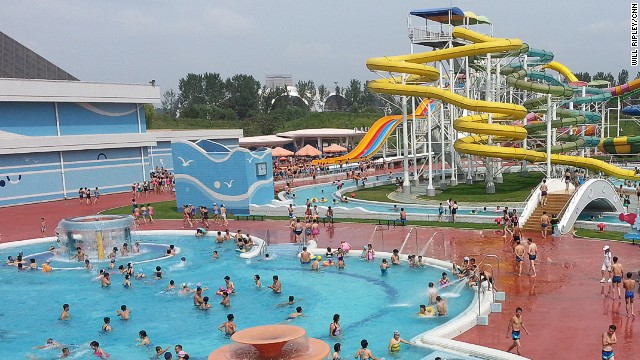 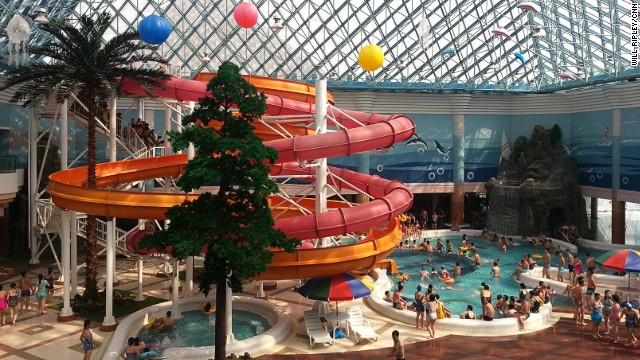 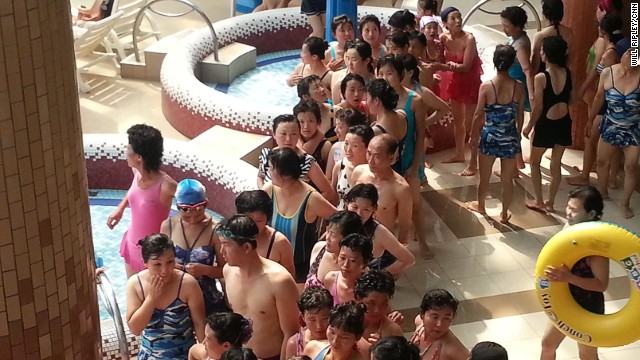 The capacity of this Pyongyang water park is up to 20,000 per day, says the North Korea government. 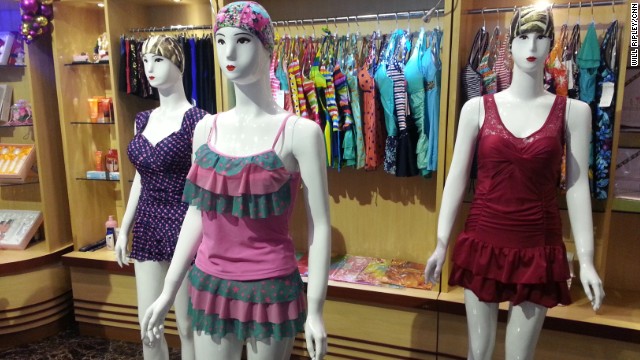 The latest North Korea swimsuit fashion on display at a Pyongyang water park. 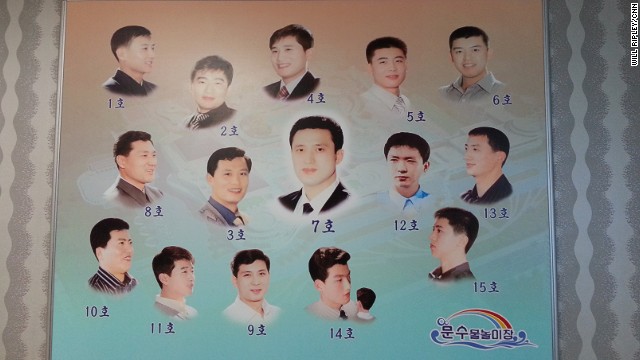 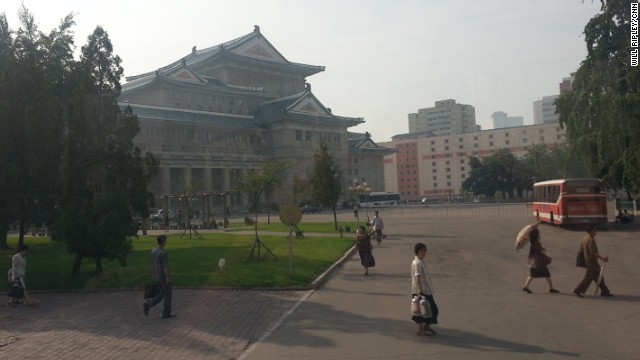 This is the oldest theater in Pyongyang built after the Korean war, a time of rapid growth for North Korea. 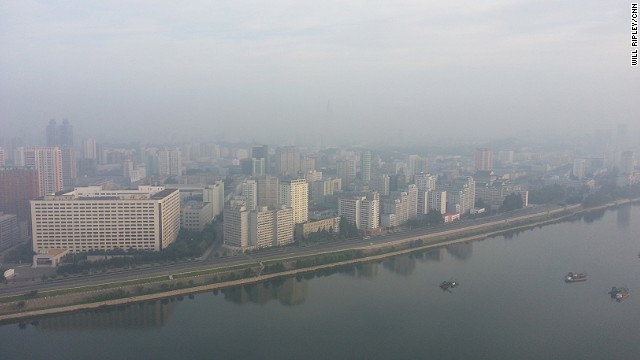 Good morning from a hazy Pyongyang, North Korea. The view from my 41st floor hotel room. 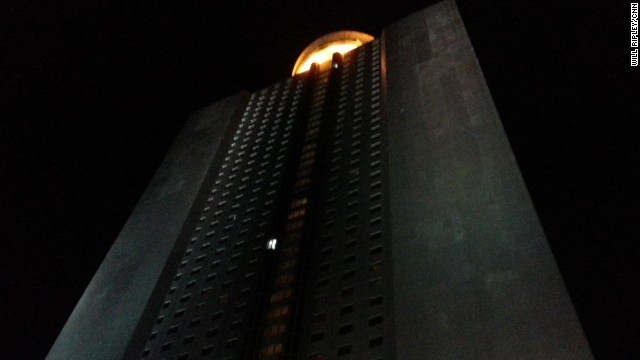 Our hotel, the Yanggakdo, is on its own little island inside Pyongyang but still apart from it. Water separates us from everyone else. 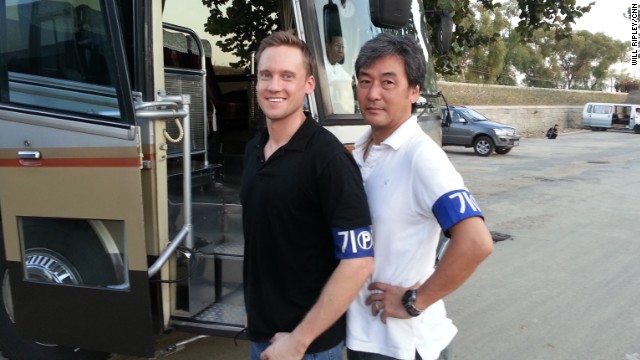 While reporting in North Korea, we must wear these arm bands. 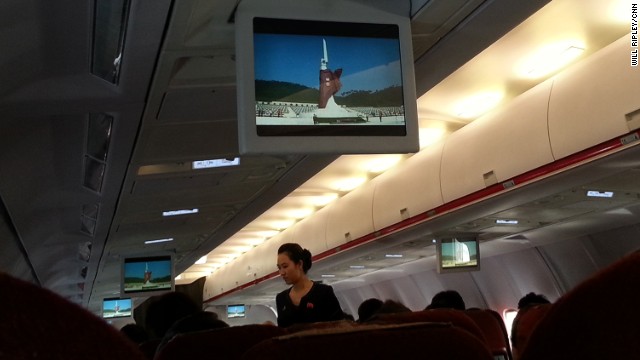 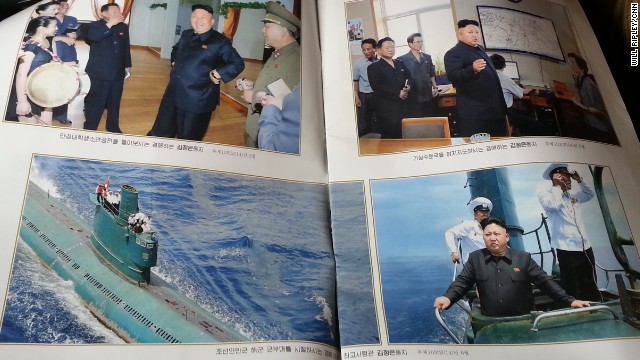 We were shown a video that shared the country's perspective on the Korean War (1950-53). It was started by an attack from United States, the video declared. When I questioned this, the guide replied, "That's what you're taught. This is the truth."

North Korea's military might and successes were paraded in other displays. We were shown a U.S. Navy research ship -- the USS Pueblo -- that was seized in 1968 for allegedly spying on the DPRK.

Photos showing planes and helicopters that had crashed in North Korean territory were also displayed, including a graphic image of a dead U.S. soldier.

Asked why it was necessary to display the photo, the guide replied: "Dead pilot? Because it shows that anybody who violates our sovereignty and intrudes on us to commit espionage must be killed like this."

Since taking power after his father's death in 2011, Kim Jong Un has sought to make his mark on the country and its population of some 25 million people.

He's launched a number of pet projects, spending millions on a new Children's Hospital and a slide-filled water park in Pyongyang, which we've seen firsthand during our trip.

However, outside Pyongyang it's unclear how far the spending has spread.

Minders have watched our every move, from the moment we landed in Pyongyang to the bus ride to our hotel, which sits on its own island. The tour has followed pre-approved routes; we're shown what they want us to see.

So far, that has been impressive infrastructure for a country that's struggling to feed its own people, and that has erected an almost unassailable boundary between it and the outside world.

Hilary Whiteman in Hong Kong contributed to this report.