Part of complete coverage from
Sally Kohn
SHARE THIS

Why Labor Day was a political move 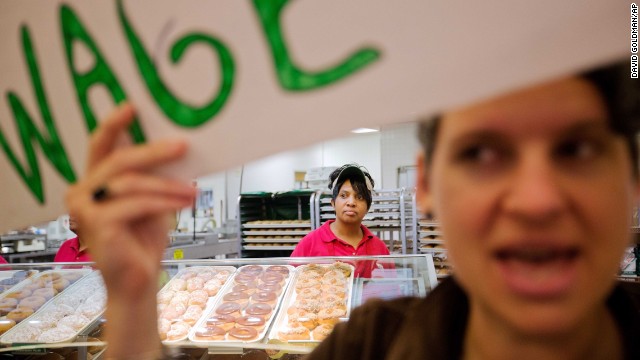 Krispy Kreme employee Beverly Ford looks on as demonstrators enter the store during a protest in Atlanta on Thursday, May 15. Calling for higher pay and the right to form a union without retaliation, fast-food chain workers around the globe participated in a strike. 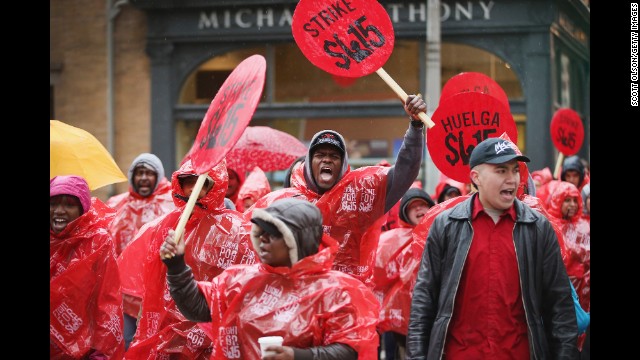 Fast-food workers and activists demonstrate outside a McDonald's in downtown Chicago. 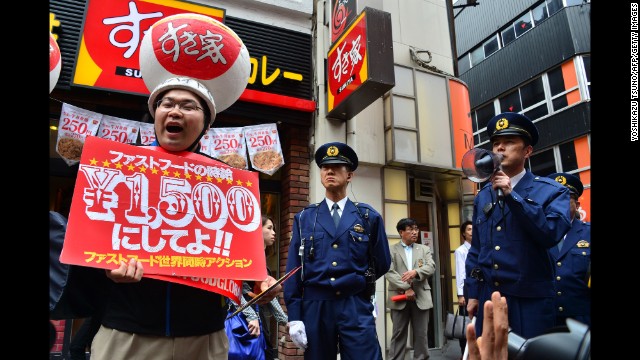 Labor union members strike in front of a McDonald's in Tokyo on May 15. 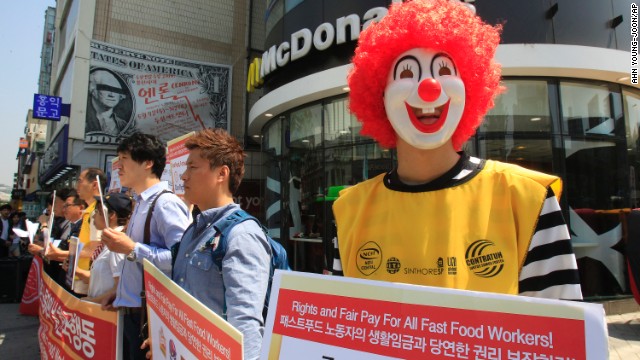 A protester dressed as Ronald McDonald participates in a strike outside a McDonald's in Seoul, South Korea. 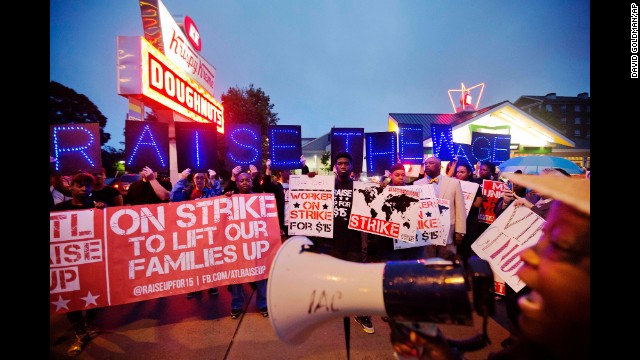 Editor's note: Sally Kohn is an activist, columnist and television commentator. Follow Sally Kohn on Twitter @sallykohn. The opinions expressed in this commentary are solely those of the writer.

(CNN) -- Labor Day isn't only a commemoration of American workers -- it's also a reminder of the often oppressive power of employers backed by the law and muscle of the U.S. government.

The history of the Labor Day tells the tale. On May 1, 1886, tens of thousands of workers protested in cities all across the United States to demand an eight-hour workday. At the time, most American laborers worked 18- or even 20-hour workdays. But police responded aggressively to the peaceful protests. Two days later, while workers were meeting to plan further protests in Chicago, police showed up and beat and shot at the group at random.

Six unarmed workers were killed by the police. The next day, outraged Chicagoans attended what was initially a peaceful protest in Haymarket Square. The peace fell apart near the end, when police advanced on the crowd. Someone who was never identified exploded a bomb and killed a police officer. The cops responded by opening fire on the protesters. In the darkness, about a dozen workers and police were killed.

The event influenced the history of labor in America and internationally for years to come. Martial law was declared across the country. The police blamed workers for the violence and, in particular, some Socialist Party labor organizers involved in the protests. Several were tried for murder and convicted. That fall, one man died in his cell and four were executed.

In response, all around the world, workers movements adopted May 1 to commemorate the Haymarket Massacre and to symbolize the ongoing fight for worker rights and worker justice. So why doesn't the United States celebrate Labor Day on May 1 as well?

On May 11, 1894, again in Chicago, workers at the Pullman Palace Car Co. called for a strike to protest wage cuts and the killing of a worker. In solidarity, the American Railroad Union called for a boycott on working in all Pullman railway cars. Within a matter of days, train traffic west of Detroit ground to a halt. In response, President Grover Cleveland called in the Army to suppress the strikes. Protests broke out. At least 26 people were killed. The government collusion with big business, both in the court system and in the deployment of the military, was unprecedented and severe. The labor community was enraged. 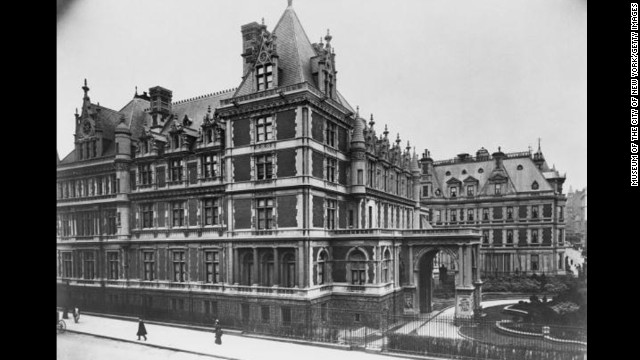 In the early 20th century, industrial tycoons like the Rockefellers and Carnegies amassed fortunes in railroads, steel or oil. Here, a view of Cornelius Vanderbilt's residence in New York in 1908. 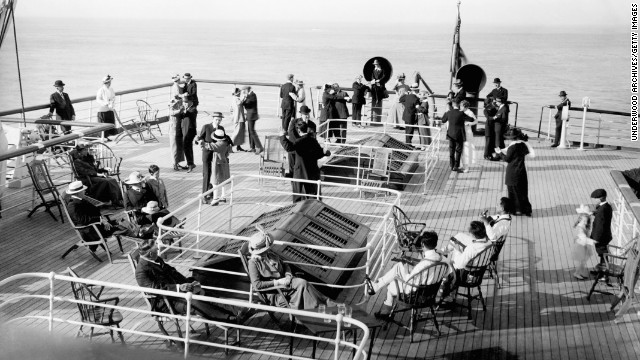 Wealthy passengers aboard a ship near San Francisco, circa 1910s. In this era, the top earners accounted for roughly 18% of the national income. 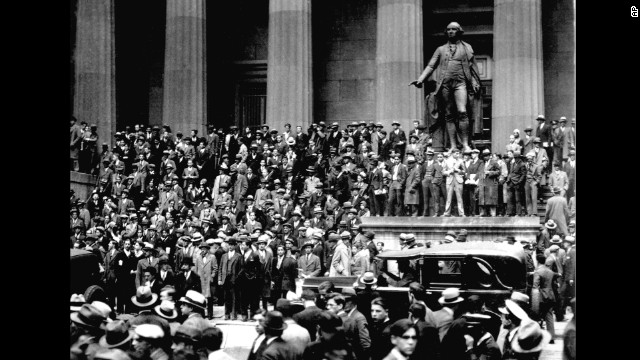 People gathered across from the New York Stock Exchange on "Black Thursday," October 24, 1929. The stock market crash of 1929, fueled by excessive speculation on Wall Street, set off the Great Depression. 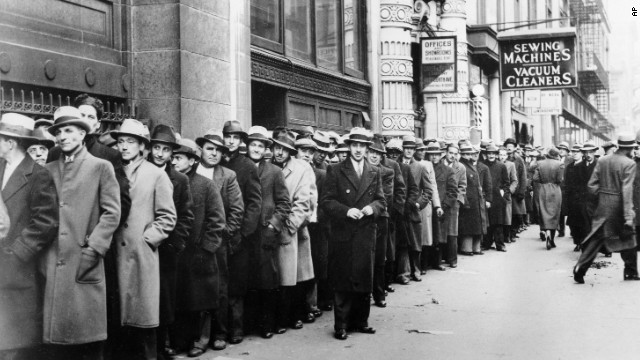 Thousands of unemployed people waited in line to register for federal relief jobs in New York in 1933. The unemployment rate rose to 25% that year. 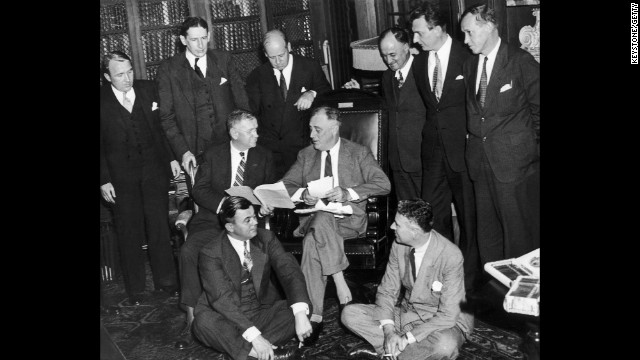 On September 12, 1935, Franklin D. Roosevelt and his staff met to find a solution to the economic crisis. FDR's New Deal policies tightened regulation of Wall Street, strengthened unions and set the top marginal tax rate for the rich at 90%. 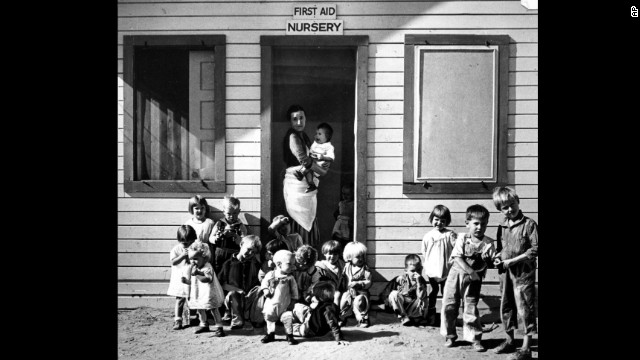 A nurse takes care of children of migratory farm workers in Arvin, California, in 1937. The unemployment rate hovered in the teens. FDR created large-scale public work programs to provide jobs for the poor and middle class. 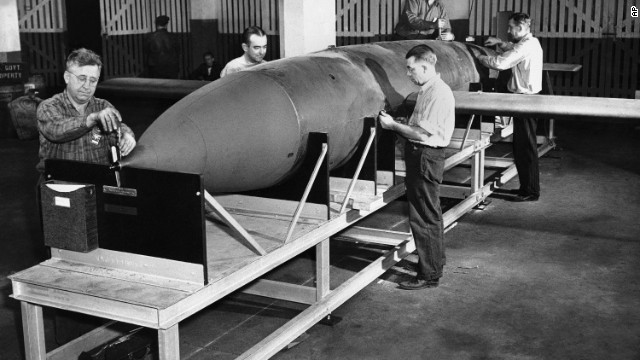 A plant in Toledo, Ohio, that made bombs. With the advent of World War II, demand for production of goods and services increased. By the mid-1940s, the unemployment rate dropped to less than 5%. 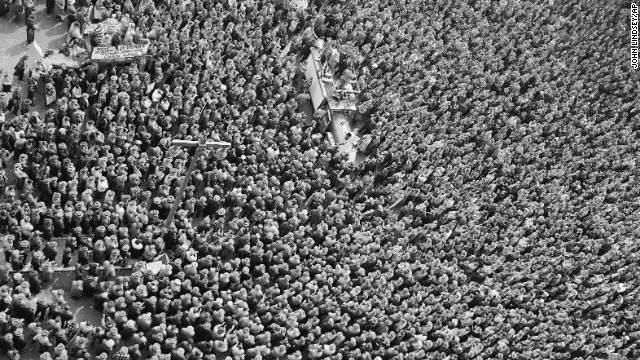 Labor unions benefited from FDR's policies and grew in power midcentury. Transit workers protested in New York on April 17, 1950. The Transport Workers Union threatened a strike if even one worker was punished for demonstrating. 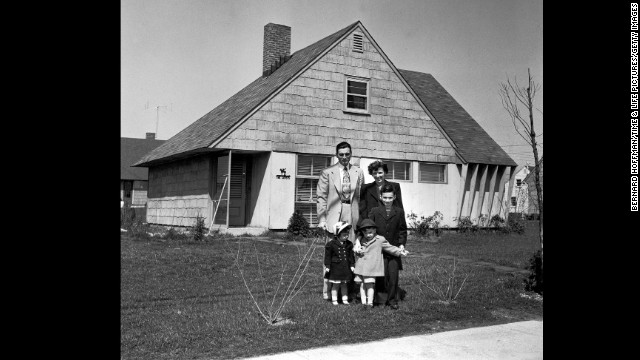 Truck supervisor Bernard Levey with his family in front of their new home in 1950. The post-war period was a prosperous time for middle-class Americans. 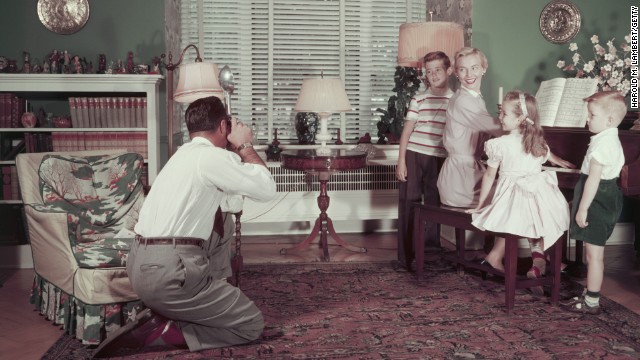 From the 1950s to the 1970s, income inequality fell. Some economists call this period "The Great Compression." The median income at the time allowed a single earner to purchase a modest house and a car, support a wife and three children. 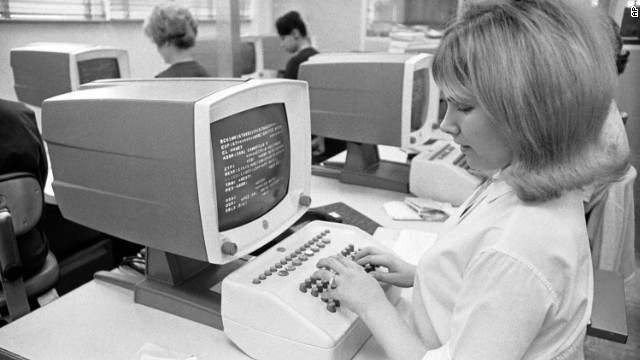 A worker at the Department of Motor Vehicles in Sacramento, California, in 1966. The feminist movement fought for equal pay for women, who were earning about 60 cents for every dollar earned by men. 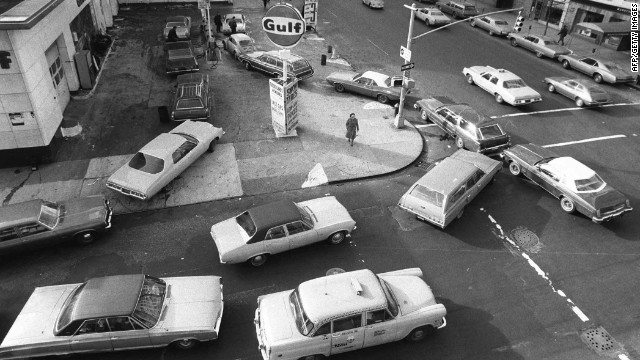 In the 1970s, income inequality began to rise. The economy experienced wage and inflation problems, along with an oil crisis that caused a gasoline shortage. Here, a gas station in New York. 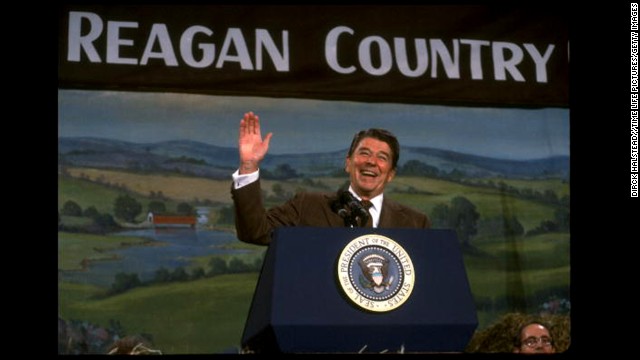 Post-1979 has been called the "Great Divergence." Some say that President Ronald Reagan's policy of supply-side economics, which reduced taxes for the rich, was a contributing factor. 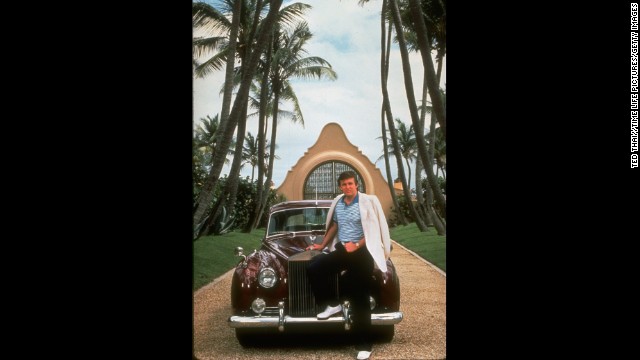 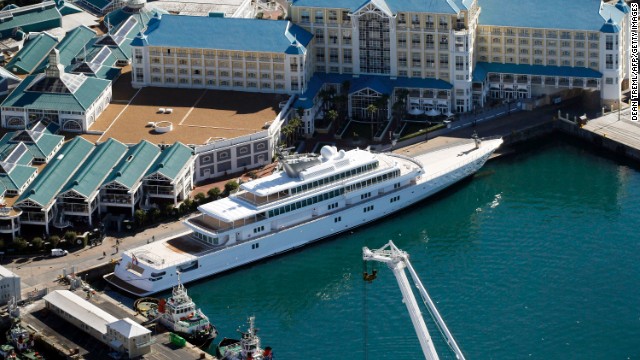 The 138-meter (453-foot) yacht "Rising Sun" was purchased by Larry Ellison of Oracle, who has been one of the nation's highest-paid executives. From the 1990s on, CEO compensation greatly outpaced the average compensation of workers. 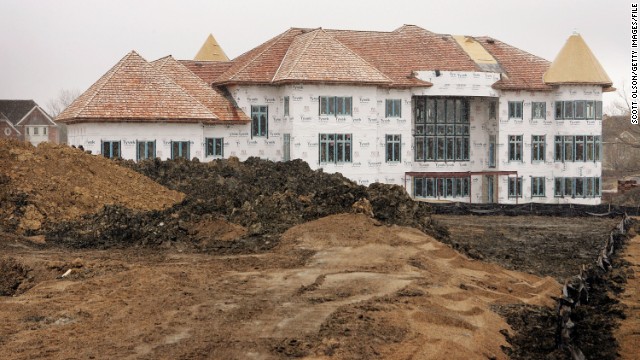 Home construction in Inverness, Illinois, in 2006. Risky mortgage lending was packaged by banks that sought to make big profits. The collapse of housing bubble instigated a credit crisis that triggered the global financial meltdown of 2007. 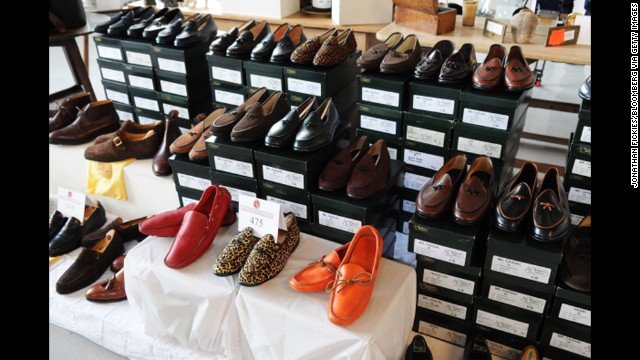 By 2007, the top 1% accounted for 24% of national income. Bernard Madoff, whose Ponzi scheme is one of largest financial frauds in history, made billions off hapless investors. Here, shoes that once belonged to Madoff. 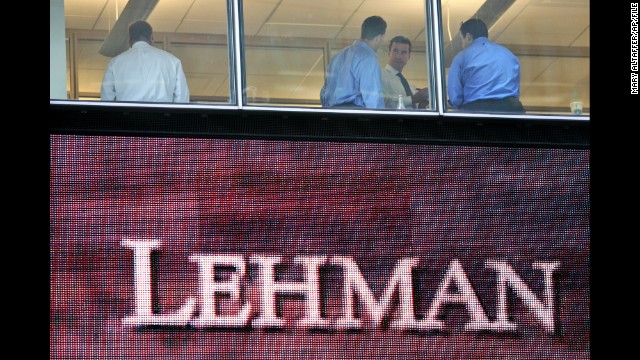 Lehman Brothers, which collapsed in September 2008, filed for the largest bankruptcy in U.S. history. Major financial institutions were bailed out by the government with a massive amount of taxpayer money. 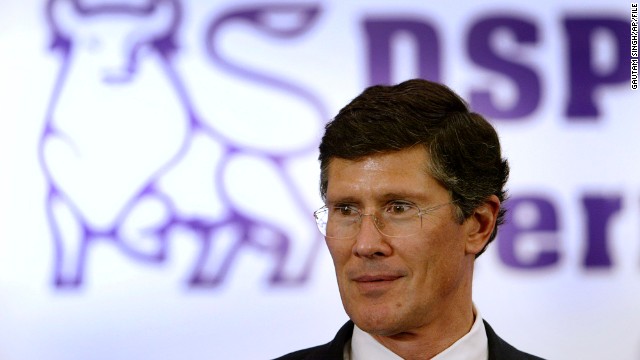 John Thain, former CEO of Merrill Lynch, doled out more than $4 billion in bonuses to employees. Despite the worst economic crisis since the Great Depression, Wall Street handed out $18.4 billion in bonuses for 2008, which is the "sixth-largest haul on record." 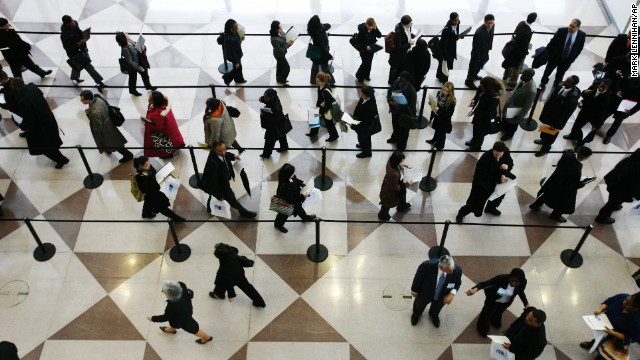 A job fair in March 2009. Unemployment rose to 10% during the Great Recession. 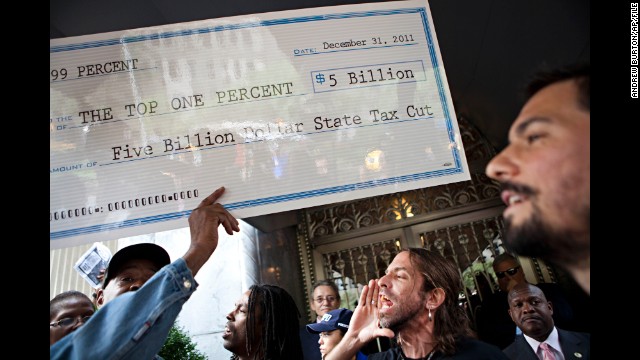 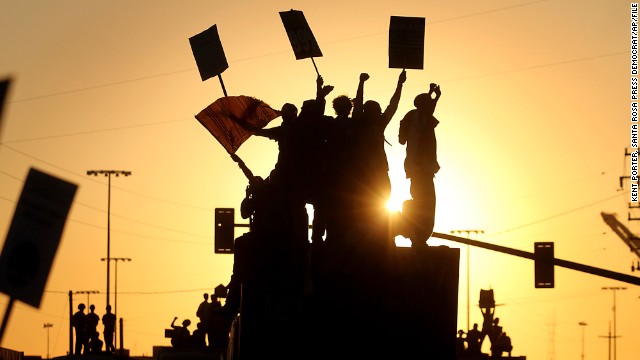 Occupy Oakland protesters in California. In 2012, the income of the top 1% increased nearly 20% compared with a 1% increase for 99% of Americans. 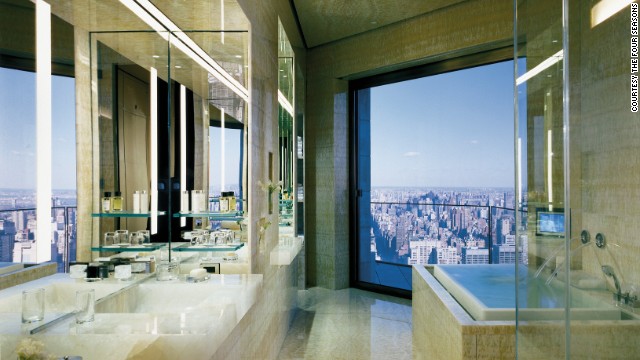 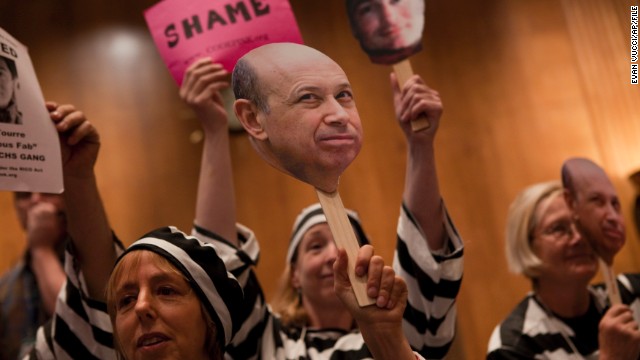 And so, the story goes, President Cleveland, realizing he had to do something quick to appease the labor movement, pressed for Labor Day to become a national holiday. But Cleveland worried that tying the holiday to May 1 would encourage Haymarket-like protests and tacitly strengthen communist and socialist movements that had backed the May 1 commemoration around the globe. And so through a twist of choices and coincidences, the first Monday of September was chosen to be the official "Labor Day" in the United States.

Labor Day, then, shouldn't just serve as a commemoration of the hard work of American laborers and all they have contributed to America's history, infrastructure and prosperity. Labor Day should also serve as a reminder of not only how companies can undervalue and undermine their workers but how our government provide dangerous or even deadly levels of support to bad employers.

Even today, we know what it takes to improve the lives and prosperity of America's workers. Unions raise the wages of workers by roughly 20% and raise total compensation --including wages and benefits after union dues are deducted -- by 28%. Raising the minimum wage helps low wage workers while pumping more spending power into the economy as a whole. And strengthening worker safety laws and other protections is good for workers and for a productive and safe economy.

But when some in government, especially Republicans, undermine the ability of workers to form a union or erode wage and safety laws, they're doing the dirty work for big business at the expense of American workers.

It's certainly less severe than calling in the Army to defend the profit interests of big corporations, but the effect is the same: Republicans taking the side of CEOs and wealthy shareholders and standing against ordinary working Americans. Study after study after study -- not to mention the entire history of our economy -- shows what policies are good for ordinary, hardworking Americans. But Republicans, who rhetorically say they support ordinary Americans, consistently stand against these measures and stand for anything that would give more power and leeway to big businesses.

When we celebrate Labor Day, we should remember that government isn't always on the side of the American people -- no matter that we have a federal holiday that was created to distract us.