Less than an hour later, he followed up with a tweet calling the graphic unauthorized.

The disparaging picture of Lehmberg was a graphic created by a conservative group, but she is a central figure in Perry's legal challenges. 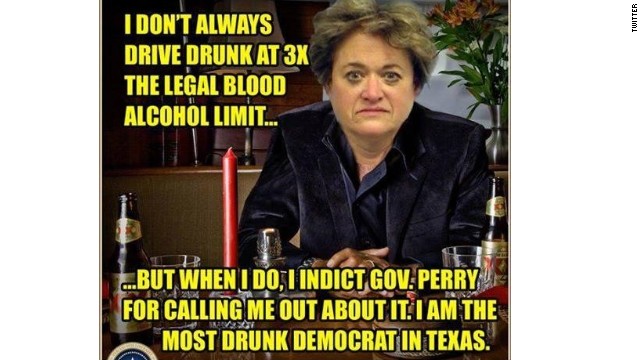 The potential 2016 Republican presidential candidate has been charged with two felonies, accused of coercion of a public servant and abuse of his official capacity relating to a veto threat over funding for a the state's Public Integrity Unit run by Lehmberg, who had been charged with drunk driving and refused to resign.

At the time of the veto, the Public Integrity Unit was investigating the Texas Cancer Prevention and Research Institute. Democrats say the attempt to slash the unit's funding was in response to the CPRIT investigation as questions arose about payouts from the organization to Perry's friends. Perry's attorneys have called the claim a "red herring."

Believe it or not, politicians do regret tweets, and there's an entire website, Politwoops, dedicated to preserving politicos' deleted tweets for your reading pleasure.