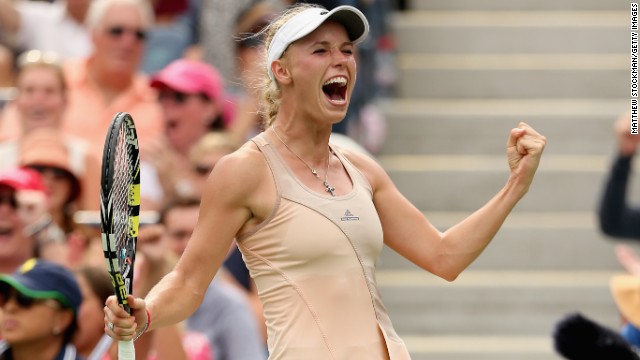 Caroline Wozniacki was pumped up after upsetting Maria Sharapova on Sunday to reach the quarterfinals of the U.S. Open. 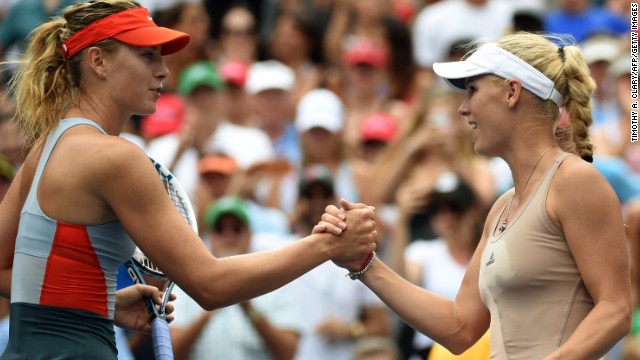 There was clearly tension between the two former world No. 1s in the third set, but it didn't carry over into the handshake. 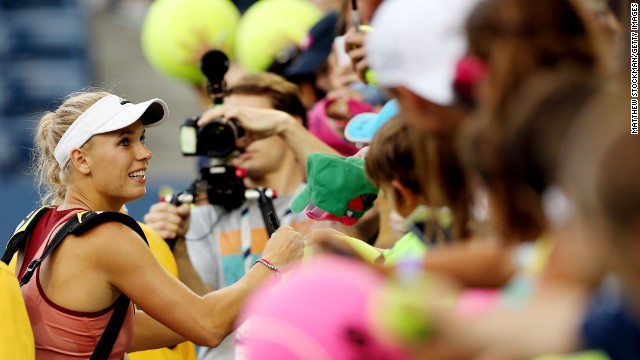 Wozniacki was the clear crowd favorite against Sharapova, likely the result of being dumped by golfer Rory McIlroy in May. The two were reportedly due to get married later this year in New York. 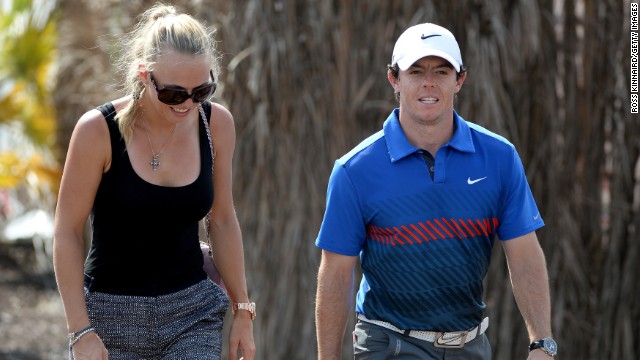 McIlroy ended the relationship because he said he wasn't ready for marriage, and he has since added two major titles to his collection. 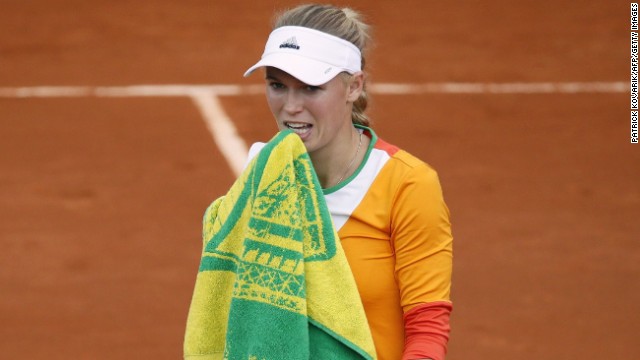 The news, revealed just ahead of the French Open, devastated Wozniacki and she lost in the first round in Paris. 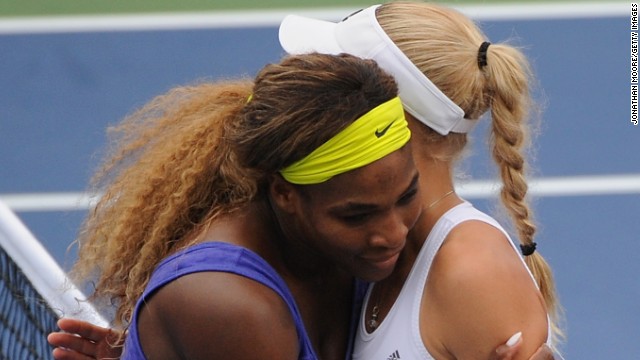 The Dane said Serena Williams, left, helped her get through some tough times. 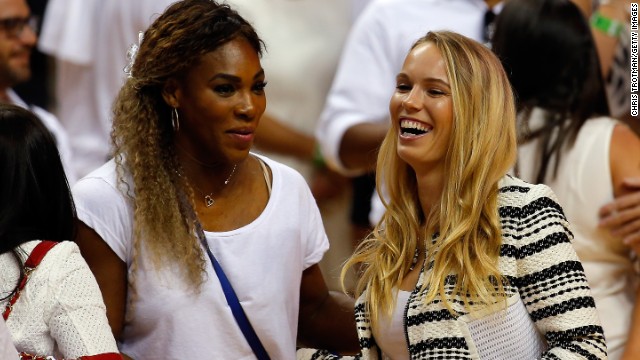 Williams and Wozniacki hung out together in Miami after the American, too, lost early at the French Open. 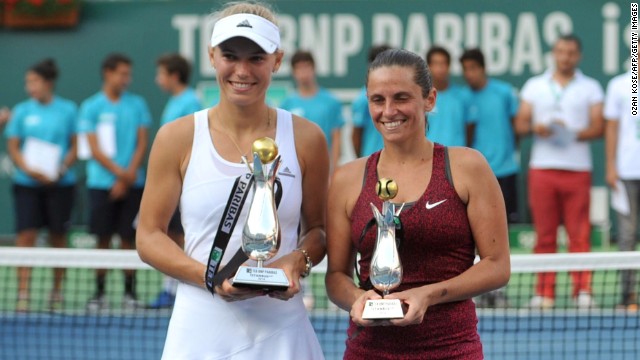 But now Wozniacki is prospering again. She began her renaissance by winning a WTA Tour title in Istanbul in July -- the 22nd of her career. 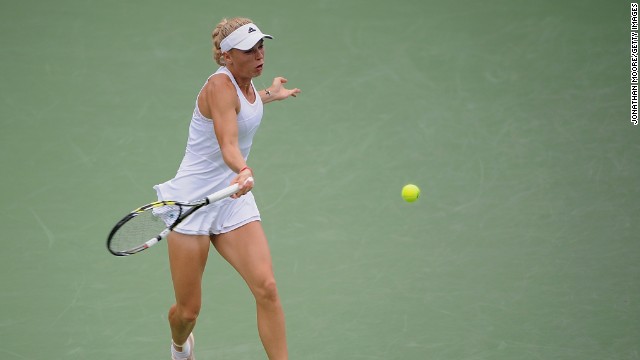 And she took top-ranked Williams to three sets in both Montreal and Cincinnati ahead of the U.S. Open, where she is seeded 10th. 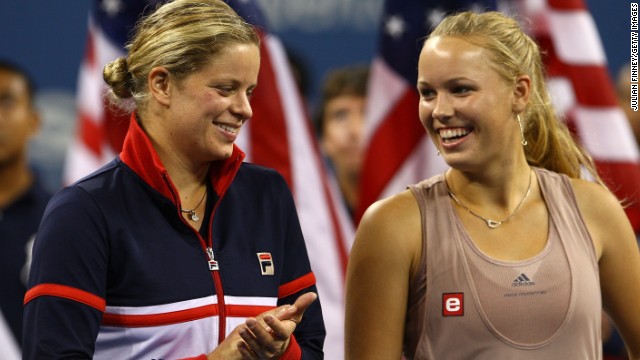 (CNN) -- Caroline Wozniacki has had her critics in the past. A defensive game and not landing a grand slam title while she was ranked No. 1 provided fodder for her detractors.

But now everyone, it seems, is rooting for the Dane.

Why? Well, much of it must be down to the fact that Wozniacki was dumped -- and very publicly -- by golf sensation Rory McIlroy only months before they were due to tie the knot.

McIlroy ended the relationship in May, saying he wasn't ready for marriage, and the news left Wozniacki devastated.

She was visibly distraught as she spoke to reporters at the French Open soon after, and exited in the first round, her earliest loss at Roland Garros in seven years.

U.S. Open by the numbers

The Northern Irishman has since rediscovered his vintage form, claiming he is more focused, and has won two major titles and regained his No. 1 ranking.

Wozniacki has also picked up her game after a lengthy slump.

She's the favorite to reach the U.S. Open final from the bottom half of the draw after upsetting Maria Sharapova on Sunday. And whereas Wozniacki said earlier in 2014 she would like to become a young mother -- suggesting her tennis days were numbered -- her own focus is now solely on the court.

That Wozniacki is prospering in New York is slightly ironic -- it was where she was reportedly supposed to marry McIlroy in November. She's sure to return to the Big Apple that month, however, having decided following their split to run in the New York City Marathon.

Wozniacki has so far refused to discuss her relationship with McIlroy at the U.S. Open, not that any of the fans minded.

The crowd at Arthur Ashe Stadium in her match against Sharapova was firmly behind the 24-year-old, leading her to gush afterwards: "The crowd was amazing today."

Her victory over Sharapova put Wozniacki into a first grand slam quarterfinal since the 2012 Australian Open.

"The season for me has been a little bit up and down," Wozniacki said. "And it's so nice to kind of start feeling like I'm playing the way I want to.

"This hard-court season has been amazing for me. I actually started already feeling really good on court since Eastbourne (in June). I have just been building on my game since then."

I think this describes it! @usopen pic.twitter.com/3tjWbJ2ztu

Wozniacki won a title in Istanbul in July and even though she didn't add to her haul in Montreal and Cincinnati, the player that stopped her was world No. 1 Serena Williams. Both of their encounters went to three sets.

They have become good friends this year, spending time together in Miami after their early departures from the French Open.

Although Wozniacki still can't be considered an attacking player, her serve has improved, and she has become more aggressive on the baseline.

Her retrieving, though, is still what gives opponents problems. Making Sharapova keep running paid off, as the Russian committed 43 unforced errors.

"I mean, she's always been fit, but there is a little bit more on her defense shots.

"It's not just balls up in the air. She's doing a little bit more with them."

Wozniacki faces another counter puncher, Sara Errani, in the last eight on Tuesday, and could face Williams -- again -- in the final. Williams advanced to the quarterfinals Monday by beating Estonia's Kaia Kanepi 6-3 6-3.

"I have had a great summer, and I told Serena I'm pretty tired of her," said Wozniacki. "I said, 'Can you just get out of my way?'

"We just laugh about it. This one was a great win for me. Maria, again, is a good player. For me, I think mentally as well to get that in my pocket is kind of nice.

"I still have hopefully a few good matches in me here in this tournament."

New York is also proving to be a happy hunting ground for Flavia Pennetta, a semifinalist last year.

The Italian won the biggest title of her career in Indian Wells, California in March but has done little to back that up since.

However, the 11th seed is now one win away from matching that feat after topping Australia's Casey Dellacqua 7-5 6-2 in early play Monday to earn a place in the last eight.

But to get any further the 32-year-old will have to get past defending champion Williams.

The winner of that match will face either former world No. 1 Victoria Azarenka or Russia's Ekaterina Makarova.

Azarenka, a beaten finalist in New York the past two years but seeded 16th after a year of injury problems, came from behind to beat Serbia's Aleksandra Krunic 4-6 6-4 6-4.

Makarova, the 17th seed, reached the last eight for the second year in a row after upsetting Canada's rising star Eugenie Bouchard, winning 7-6 (7-2) 6-4 against the seventh seed.

Japanese 10th seed Kei Nishikori reached the second grand slam quarterfinal of his career after outlasting Canada's No. 5 Milos Raonic in a marathon match that ended at 2:26 a.m. local time -- equaling the latest finish in the tournament's history.