Steven Spielberg and 'The horse the Germans could not kill' 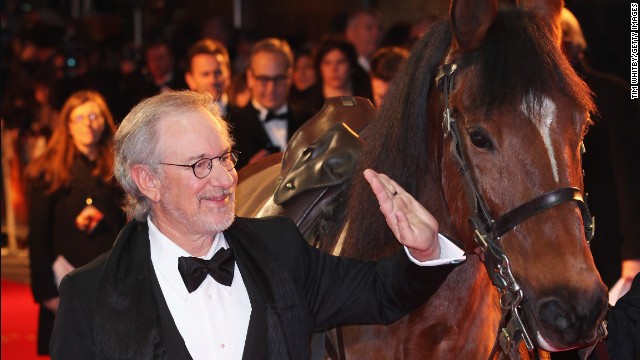 (CNN) -- Hailed as the horse "the Germans could not kill" after surviving machine gun attacks and falling shells, one of World War I's most famous animals has been honored with its own version of Britain's most prestigious medal the Victoria Cross.

Warrior, who arrived on the Western Front on August 11, 1914, with his owner and rider General Jack Seely endured the horrors of the Battle of the Somme and was rescued twice at Passchendaele after becoming trapped in his stables.

After suffering a number of injuries, Warrior returned home to the Isle of Wight in 1918 where he lived until he passed away at the age of 33, and the horse has now been honored by being awarded an Honorary PDSA Dickin Medal.

Warrior's life has been used as an inspiration by the likes of film director Steven Spielberg, whose film Warhorse won critical acclaim and was nominated for an Oscar.

Warrior, whose statue is now at the castle, has been awarded the prestigious Honorary PDSA Dickin Medal #IsleofWight pic.twitter.com/44xk5qhZA2

"Warrior is an extraordinary example of the resilience, strength, and profound contribution that horses made to the Great War," Spielberg said.

"Recognizing him with an Honorary PDSA Dickin Medal is a fitting and poignant tribute not only to this remarkable animal, but to all animals that served."

The film, which was based on the 1982 novel by Michael Morpurgo, is one of the most famous of its kind as it tells the tale of Joey, a horse which serves in WW1.

It's the first time that the PDSA Dickin Medal has been awarded to an animal who served on the front line during conflict in the veterinary charity's 97-year history.

The medal was accepted by Seely's grandson, Brough Scott, who is a horse racing journalist and broadcaster.

The ceremony was held at London's Imperial War Museum where the horse was honored 100 years after he began his journey into war.

"Warrior's story - which I grew up hearing at my mothers' knee -- was lost in time to the wider world. But now he rides again 100 years later, thanks to PDSA," said Scott.

"My family and I are more than honored that Warrior has been given this award on behalf of all animals that also served; we are truly humbled. I only wish Jack Seely were here today to witness Warrior receiving the animal equivalent of the Victoria Cross."

Warrior is the 66th winner of the medal from the PDSA but is the first to receive an honorary award and the first to have done so having been involved in WW1.

Since its introduction, 65 Dickin Medals have been awarded to 29 dogs, 32 Pigeons who flew in World War II, three horses and a cat.

The most recent recipient was Sasha, a military dog, who died while on patrol in Afghanistan.