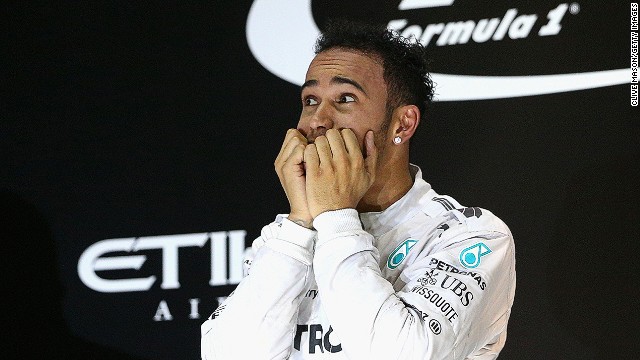 It's been a nail biting rollercoaster ride but Lewis Hamilton edges out his Mercedes teammate and title rival Nico Rosberg to win the 2014 Formula One World Championship. 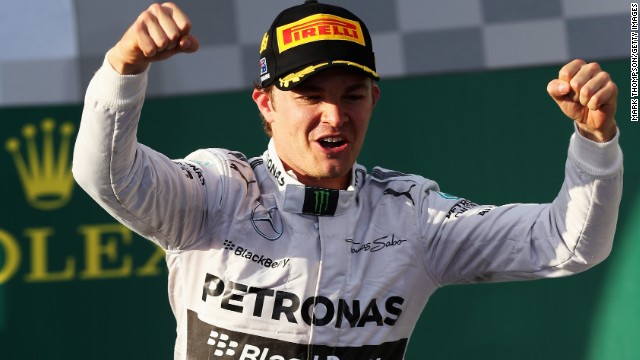 Round one: Nico Rosberg rules in Australia. His Mercedes teammate Lewis Hamilton had started the race from pole position but retired because of an engine problem. 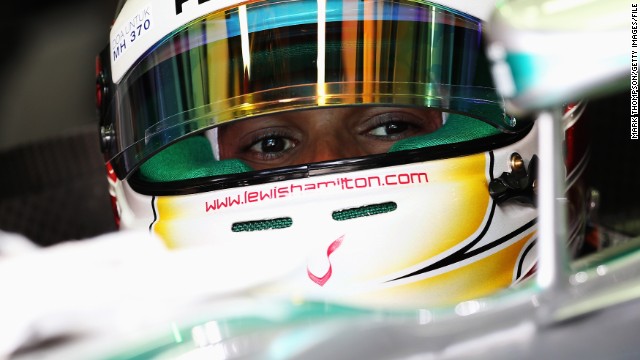 Round two: Hamilton was quick to make amends, controlling the Malaysian Grand Prix as he led from start to finish with Rosberg taking second place. 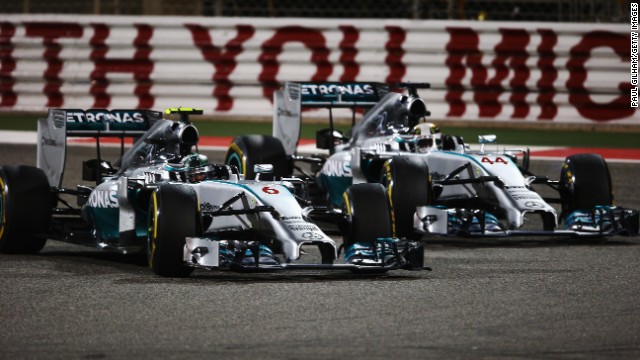 Round three: Hamilton gets the better of Rosberg in Bahrain. The German had started on pole but Hamilton took the lead at the first corner. 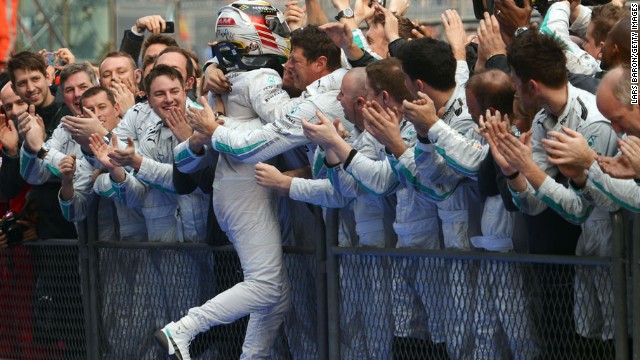 Round four: It's three in a row for Hamilton in Shanghai. Victory at the Chinese Grand Prix sees the Briton win three straight races for the first time in his career. 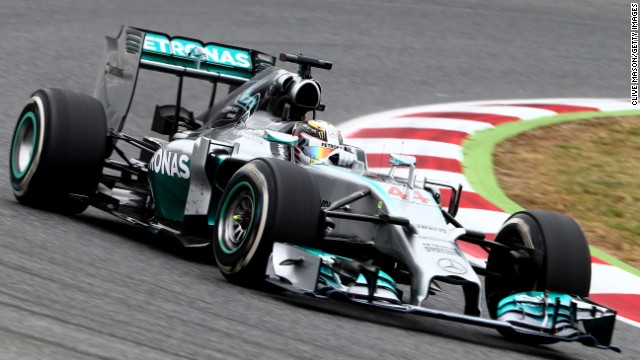 Round five: Hamilton rains on Rosberg's parade in Spain as he wins to take the lead in the world championship standings for the first time. 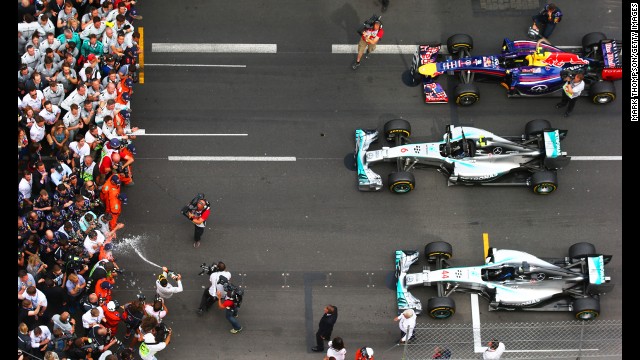 Round six: Monaco mayhem saw Rosberg survive an investigation into claims he had impeded Hamilton in qualifying. He went on to win the race and regain the championship lead. 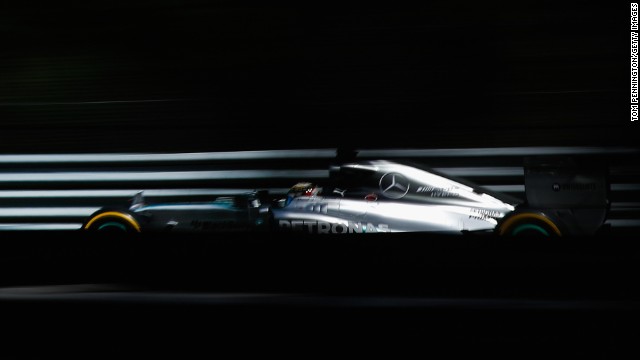 Round seven: Oh Canada! There are reliability problems for Hamilton as brake failure puts him out of the Canadian race. Rosberg finishes second. 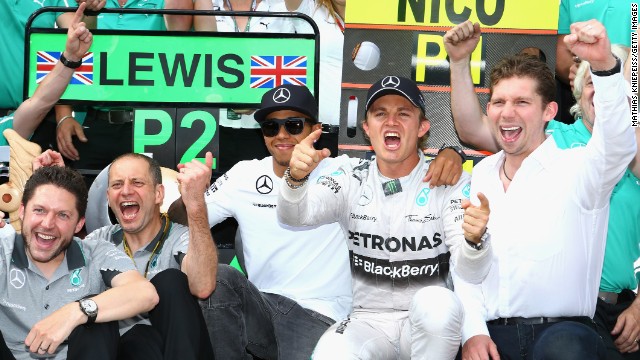 Round eight: Rosberg gets back on track in Austria where another victory saw the German stretch his championship lead over Hamilton. 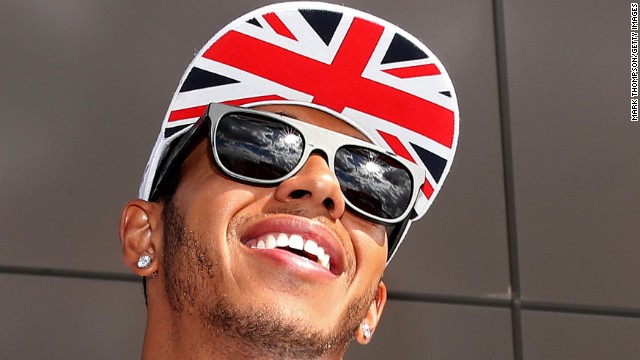 Round nine: There's some home help for Hamilton as he wins the British Grand Prix while Rosberg retired with a gearbox problem. 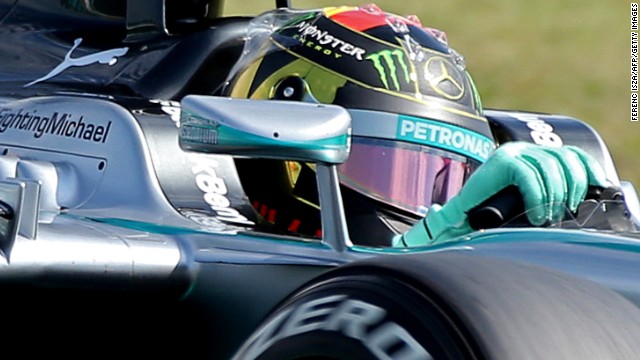 Round 10: Hamilton hangs tough in Hungary, choosing to ignore advice from his team to allow Rosberg to pass. The Briton finished the race in third, with his Mercedes teammate in fourth. 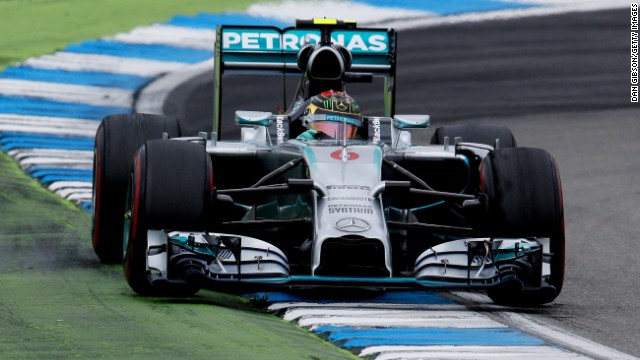 Round 11: In Germany, Rosberg led from the start to the checkered flag to win his home grand prix at Hockenheim, with Hamilton finishing in third. 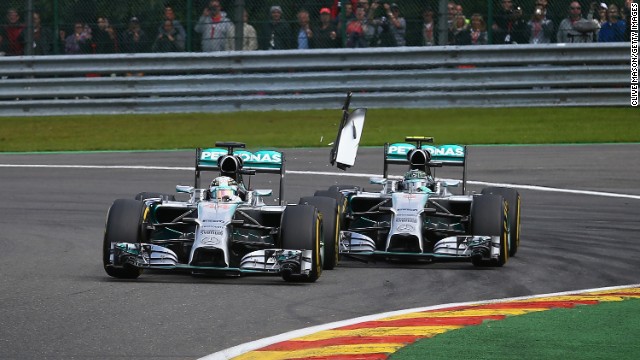 Round 12: Sparks fly at Spa as Rosberg and Hamilton collide during the Belgian Grand Prix. The incident, which forced Hamilton to retire, is a major flashpoint in an increasingly strained season for the former teenage friends. Rosberg finished the race in second. 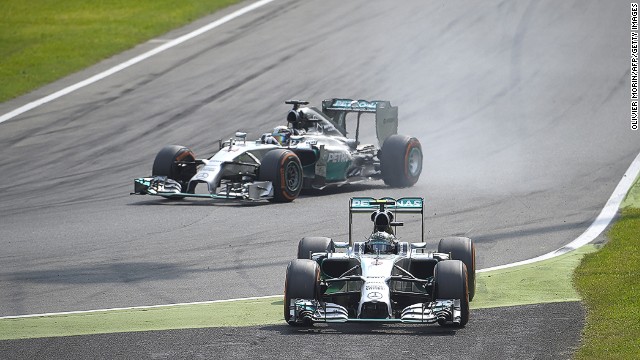 Round 13: At the next race in Italy, Hamilton takes a crucial win when Rosberg makes a mistake when leading the race and runs wide down the escape road. 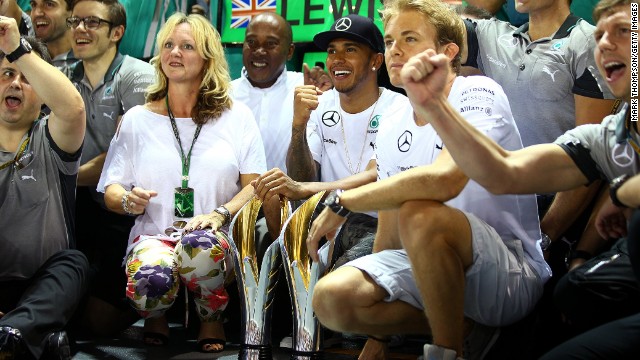 Round 14: Rosberg joins Hamilton and his family for the celebrations in Singapore but another win for the Briton means Rosberg loses his championship lead. 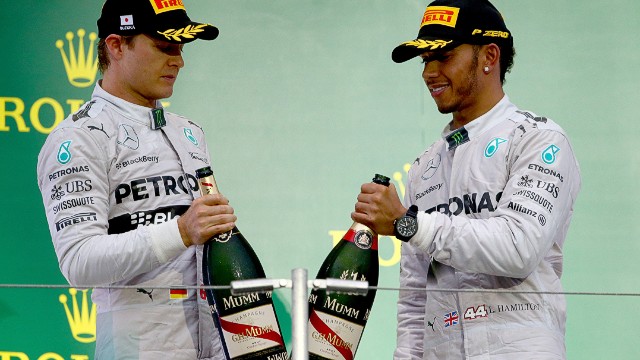 Round 15: Hamilton beats Rosberg again in Japan but the celebrations are muted on the podium following a serious crash involving Marussia driver Jules Bianchi. 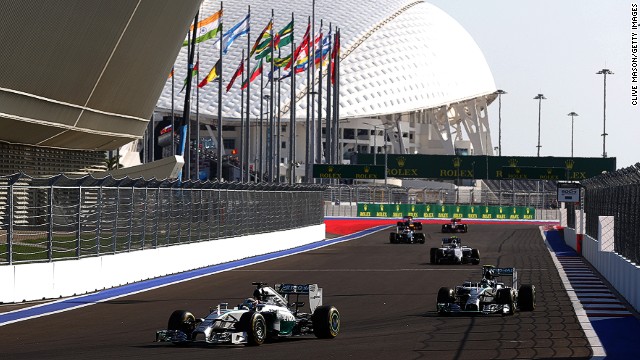 Round 16: Hamilton's hot streak continues in Sochi where he wins the inaugural Russian Grand Prix to help Mercedes wrap up the team championship. 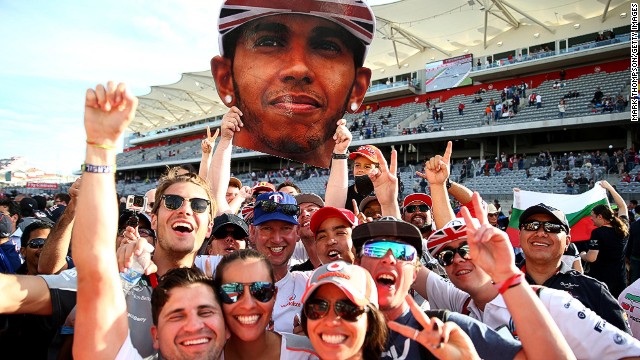 Round 17: Hamilton fans have plenty to cheer about at the U.S. Grand Prix as the 2008 world champion wins his 10th race of the season and fifth in a row. 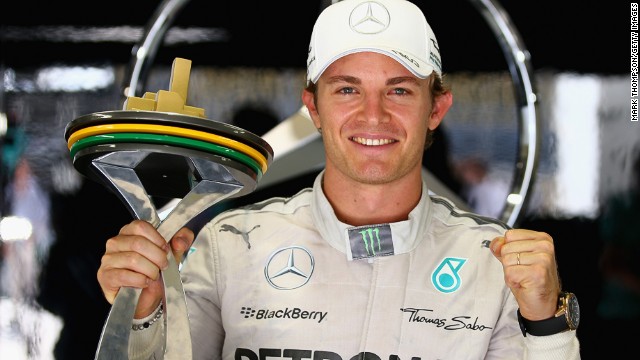 Round 18: Rosberg is on song in Sao Paulo, winning the Brazilian Grand Prix to close the gap on Hamilton to 17 points in the title chase with one race to go. 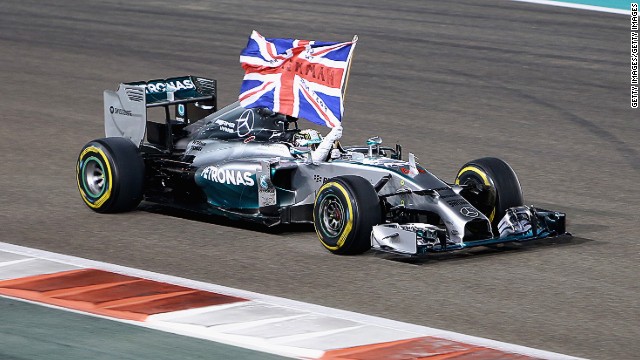 Monza, Italy (CNN) -- Mercedes has the fastest two cars in Formula One this season but there is just one problem -- there can only be one world champion.

Lewis Hamilton and Nico Rosberg arrive at the Italian Grand Prix this weekend with the title fight distilled into a thrillingly intense duel.

Mercedes is desperate to keep a lid on the seething tensions spilling over from a Belgian bust-up as the German team chases its first world title since 1955.

But is it too late to mend the poisoned relationship between the star drivers?

I'm gutted with the result - not just for my own C'ship hopes but for the team,as we really should have had a one-two pic.twitter.com/KzeY9sUmyQ

Where did it go wrong?

In the dry desert heat of Bahrain, rivalries between the Mercedes teammates began to sizzle.

Rosberg complained over the team radio when Hamilton cut across him to retake the lead, saying the move was "not on."

Mercedes then warned the drivers "to bring both cars home" as they vied for victory until the checkered flag.

Monaco was not exactly home sweet home for Rosberg, who lives in the principality.

After setting the fastest time in qualifying, the German went off track -- denying Hamilton, who was behind him, a chance to set his potential quickest time.

There was more drama in Hungary when Mercedes asked Hamilton to allow Rosberg, who was on a different tire strategy, to pass.

The 2008 world champion, who was second at the time, refused to obey the team order and finished third, one place ahead of Rosberg.

The pair's duel was short but by no means sweet in Belgium two weeks ago.

In an ill-judged attempt to take the lead on lap two, Rosberg gave Hamilton's car a punctured tire and effectively put him out of the race.

The German finished second but was greeted by a chorus of boos on the podium from fans who saw his pass as a deliberately cynical move.

That was a tough race. We had the pace to win today but the incident cost us a top ...https://t.co/IhDzI6u8aM pic.twitter.com/H9AHdAW5nL

After admitting the Spa clash was his fault, Mercedes handed him a hefty fine -- although not by F1 driver salary standards.

Spa through the lens

But the 29-year-old, who is always polite and affable in person, has since apologized to Hamilton and told the media melee in Monza this week he was not proud of his behavior.

Rosberg may not be Machiavellian but one thing is for sure, Hamilton has had his share of bad luck in 2014.

Whether it was brake failures or engine fires, fate has been a fickle friend.

But is Hamilton entirely blameless? Well, the Briton has arguably brought some hard luck on himself.

There have, in particular, been misjudgments in qualifying, most notably in Canada, Austria and Britain, when he chose not to set a final lap when the damp track conditions were improving.

Interactive: Take a tour of the Monza circuit

Who's refereeing the fight?

Mercedes wants to calm tensions between its racers as it attempts to win both the driver and constructor titles.

Five days after the Belgium bust-up, the team issued a statement warning "another such incident will not be tolerated."

It added: "Lewis and Nico understand and accept the team's number one rule: there must be no contact between the team's cars on track."

The wind in Sauber's sails

Mercedes motorsport director Toto Wolff said in Italy he was not ruling out changing a driver lineup if "we are not able to manage the two of them."

Rosberg recently signed a new contract, which will keep him at the team until the end of 2016, while Hamilton has a deal until 2015.

F1's governing body, the FIA, decided not to investigate the Spa clash, even after Rosberg admitted his culpability.

There has been debate among F1 experts about whether the FIA should be more proactive in refereeing the heavyweight title bout or whether it should stand by and let the drivers slug it out.

Asked by CNN in Italy whether the FIA should have investigated the Spa incident more closely, Hamilton responded: "That's a very good question because how do we move forward?

"Does that mean we can race a lot closer and if the guy in front comes off and is out of the race, nothing's going to happen? Or does it mean if it happens again there will be a penalty?

The people have spoken! 92% of you favour free racing, 8% team orders. Now, Let's take it one step further... #F1 pic.twitter.com/xRdPgBDROA

Who's in pole position for the title?

With seven races left to go, Rosberg has a 29-point lead over Hamilton.

He is on course to win his first world title and follow in the footsteps of his father Keke, the 1982 champion.

Hamilton knows this is his best chance of winning a second world title since his triumph with McLaren in 2008.

The British racer has to keep out of trouble on track and hope his luck turns.

There is, however, a new twist to the 2014 season, which could be decisive.

The final race in Abu Dhabi will reward the drivers with double points, which means a win is worth 50 points and second place 36 points.

But if Rosberg takes a 15-point advantage to the desert finale he can afford to finish second to Hamilton and still win the title.

While the two Mercedes drivers are locked in an intense fight, Daniel Ricciardo is sneaking up on the rails.

The Red Bull racer has the momentum after winning the last two races in Hungary and Belgium and is now 64 points behind Rosberg in the standings.

My aim this weekend is to claw back the gap in the Drivers' C'ship. I won't give up until the flag drops in Abu Dhabi pic.twitter.com/zbbjRjJFQi

Could the Australian snatch the title?

"Yeah I can," Ricciardo said in Italy. "But it obviously is going to take more than just winning the next seven races. It is going to have to take a bit of luck as well.

"If they crash into each other at every race this year that will probably hand me the championship on a platter!"

Read: "It's great to be beating Sebastian Vettel"

Another great day yesterday. Thank you to everyone that made it possible 😚 pic.twitter.com/tKB1Jh1erv

Who can handle the heat?

There is a feeling in the F1 paddock that the intense 2014 championship is turning into a psychological battle between the Mercedes men.

"Your mental state is always important in sport," Rosberg chirpily agreed in Italy.

On one side of the garage is the ice-cool calm and consistency of Rosberg and on the other side is Hamilton's fiery passion and blistering pace.

Keeping a cool head, as well as a steady hand on the wheel, could decide which of the contenders wins the 2014 world title.