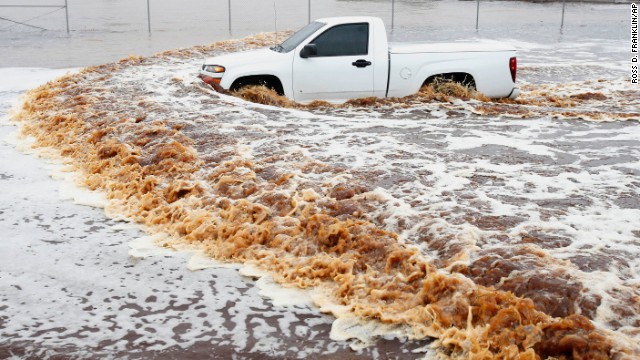 A truck creates a wake as its driver tries to make it through a severely flooded street in Phoenix on Monday, September 8. Arizona's governor declared a statewide emergency as record-setting rains flooded numerous Phoenix-area roadways and forced some schools to shut down. 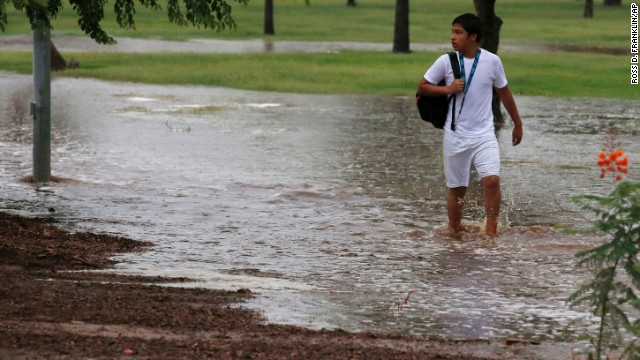 A student tries to walk along a flooded sidewalk so he can be picked up by his parents September 8 in Phoenix. 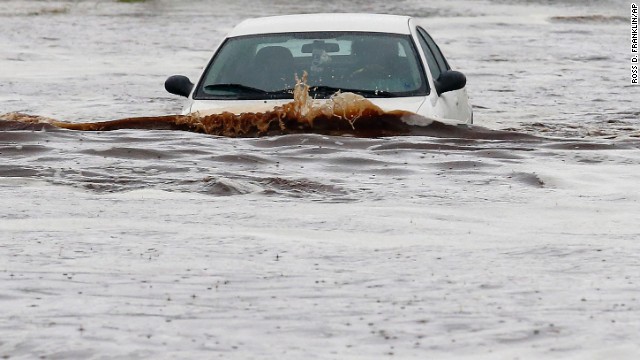 A driver tries to navigate a severely flooded street in Phoenix on September 8. 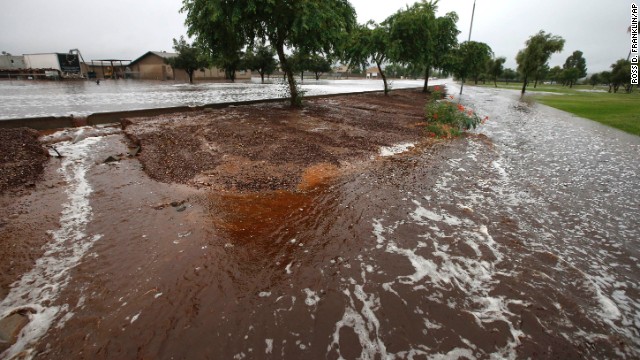 Floodwaters wash away a Phoenix sidewalk on September 8. 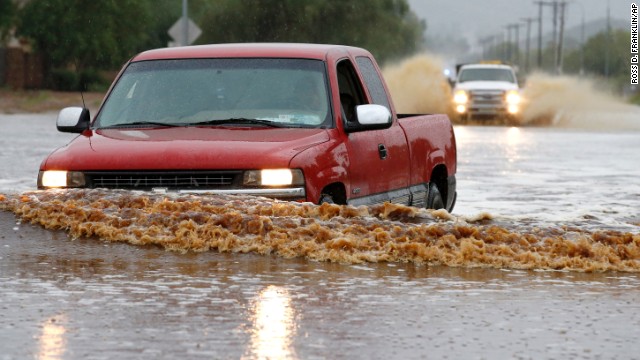 Up to 200 children were briefly trapped in an elementary school in Moapa, Nevada, due to the waters, the state highway patrol said Monday night.

The students at Perkins Elementary school, about 60 miles from Las Vegas, were with teachers and not in danger, said Highway Patrol Spokesman Loy Hixson.

Flash flooding also washed a portion of Interstate 15 away near the community of Glendale, taking many vehicles with it. No one has been injured but it has taken so much of the highway that it may not be fixed until Wednesday, Hixson said.

In Arizona, the governor declared an emergency Monday as flooding from the historic rains closed roads and schools in her state.

A woman was killed after her car was submerged in floodwaters, the Tucson Fire Department said. Rescuers were unable to reach the vehicle in time.

"Within a minute of us getting there, the car washed away," Capt. Barrett Baker told CNN. The waters were up to 12 feet deep, he said, and swept the car for several blocks.

We've counted more than 2 dozen cars underwater like this on I-10 near 43rd Ave in West Phoenix #Monsoon2014 pic.twitter.com/qwtiSnoldf

"This rain is coming down so hard you can't even see to drive, not to mention the thunder and lightning right now," KTVK reporter Jill Galus said in a Twitter post early Monday morning.

"The problem with this ... was that it happened in the dark, it happened before the sunlight, and people were driving into it," he said.

What's causing the record-setting rains and flash floods in the Southwest?

Blame Norbert, which hit Mexico's coast as a hurricane on Saturday. Now the storm system is moving through the United States, and it's still packing a punch.

"This could go on for a few more days," Myers said.

I am declaring a statewide emergency for areas impacted by today's severe rainfall and flooding. #TurnAroundDontDrown #azwx

By mid-morning Tuesday, the National Weather Service said 2.96 inches of rain had fallen at Phoenix Sky Harbor International Airport, breaking the record of the largest amount of rain to fall in a single calendar day. The airport remained open but fights were delayed by the weather.

The rainfall total in just one day was more than the average amount of rain the area typically sees during its rainy season, officials said.

At least 5,000 customers are without power due to flooding and storms in the Phoenix metro area, and the number is expected to grow, Arizona Public Service spokesman Steve Gotfried said.

The Roosevelt School District called off classes "due to the heavy rains and low visibility as a result of fog," officials said in a Facebook post.

Phoenix Mayor Greg Stanton declared a state of emergency and said his city was facing a historic amount of rain. Police and fire dispatchers fielded thousands of calls as the storm hit, officials said.

"I am confident as mayor that all the appropriate steps have been taken, are being taken right now and will be taken," Stanton told reporters. "Obviously, we're monitoring the weather very, very closely."

By Monday afternoon rains had stopped in Phoenix, but storms could pick up again overnight, Myers said.

CNN's John Fricke and Sean Morris contributed to this report.