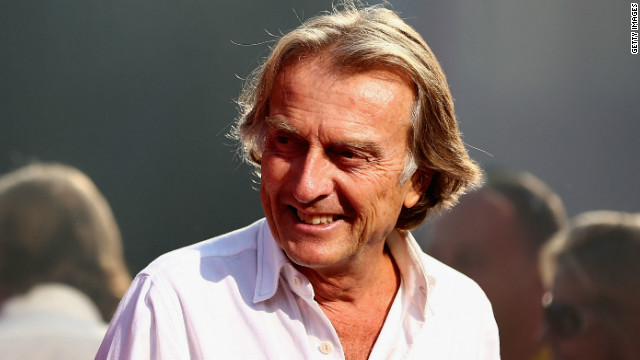 (CNN) -- With Ferrari currently enduring one of its least competitive Formula 1 seasons in years, the man who helped the team to the top of the sport is to step down as chairman.

More than two decades after first taking up the post in 1991, Luca di Montezemolo will leave the Scuderia on October 13, with chief executive officer of parent company Fiat Sergio Marchionne is set to succeed him.

"This is the end of an era and so I have decided to leave my position as chairman after almost 23 marvellous and unforgettable years," read a statement from Di Montezemolo.

Montezemolo: This is the end of an era http://t.co/tcsZg4Tfq7 pic.twitter.com/p06C4eVH34

Under the Italian success became almost routine for Ferrari.

Away from the track, Di Montezemolo also played a key role away in helping to transform the brand into one of the world's finest luxury car makers.

"Ferrari is the most wonderful company in the world. It has been a great privilege and honour to have been its leader," Di Montezemolo's statement continued.

"I devoted all of my enthusiasm and commitment to it over the years. Together with my family, it was, and continues to be, the most important thing in my life."

Marchionne paid tribute to the man he is due to succeed -- someone he was appointed alongside to the Fiat Board of Directors in 2003.

"We worked side by side, sharing concerns, difficulties and successes," said Marchionne in a statement. "As chairman of Ferrari, he drove the company to a new level of technological and organizational excellence which also brought with it outstanding financial results."

Since 2008, however, Ferrari have been starved of such successes, with the team having now gone nearly six years without either a Drivers' or Constructors' World Championship title.

The 67-year-old Di Montezemolo's future had been the subject of speculation due to Ferrari's poor form on the track this year -- Fernando Alonso and Kimi Raikkonen sit fifth and 10th respectively in the World Championship standings, while the team itself lie fourth in the Constructors' World Championship, 292 points off leaders Mercedes.

Reports emerged ahead of Sunday's Italian Grand Prix in Monza about a Di Montezemolo exit, although the Italian was insistent afterwards about staying in the role despite Ferrari suffering their worst performance of the season -- Alonso was forced to retire, while Raikkonen had to settle for ninth.

Marchionne, though, immediately contradicted his colleague -- "We are good friends but his statements... these are things I wouldn't have said myself.

"Luca and I have discussed the future of Ferrari at length," Marchionne's statement continued. "And our mutual desire to see Ferrari achieve its true potential on the track has led to misunderstandings which became clearly visible over the last weekend.

"I want to thank Luca for all he has done for Fiat, for Ferrari and for me personally."

Di Montezemolo first arrived at Ferrari in 1973, becoming assistant to the manufacturer's founder, Enzo Ferrari, before going on to manage the team from 1974. A number of different roles in Fiat followed during the 1980s, before he assumed his position as president in 1991.

"I wish the shareholders, particularly Piero Ferrari who has always been by my side, and everyone in the Company the many more years of success that Ferrari deserves," Di Montezemolo added.