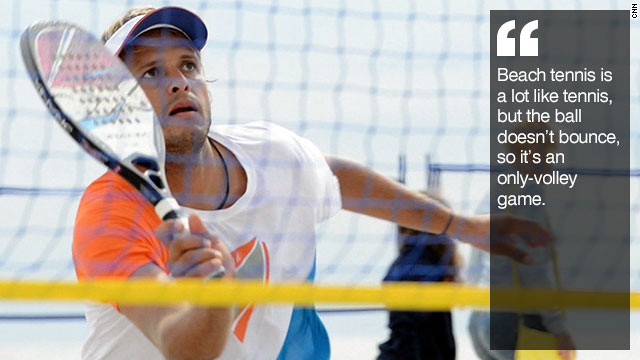 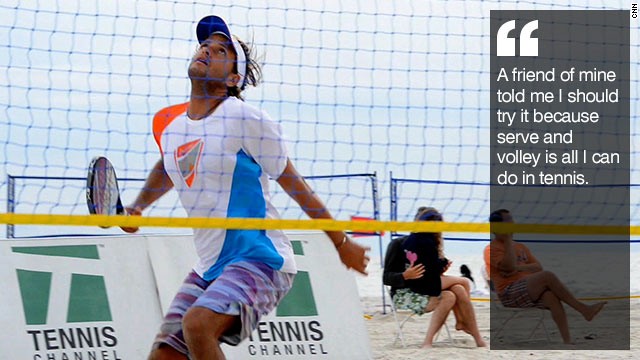 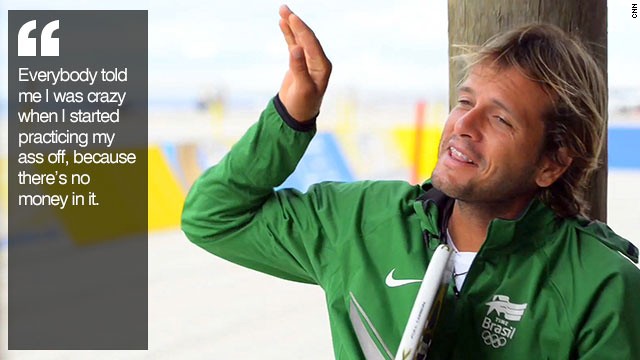 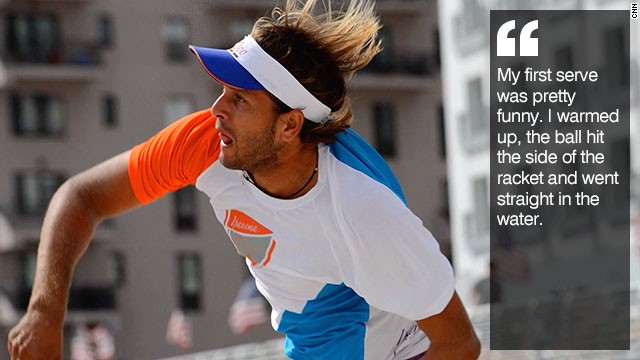 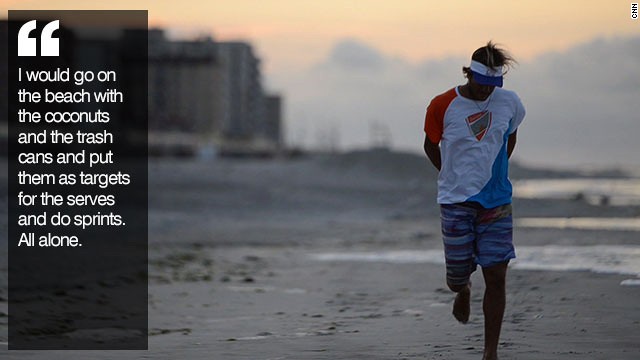 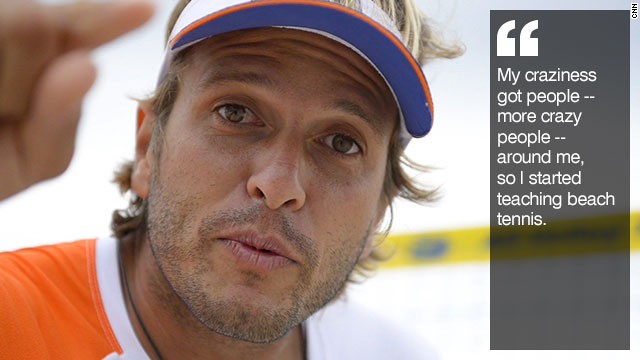 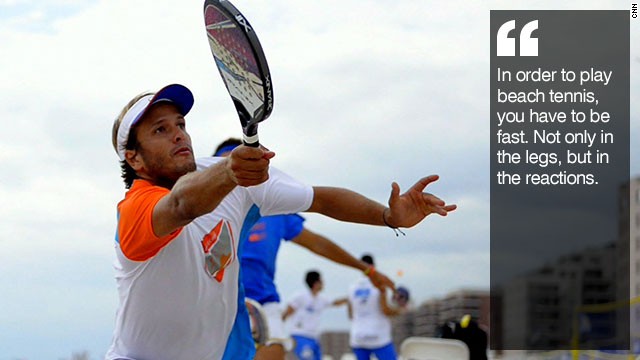 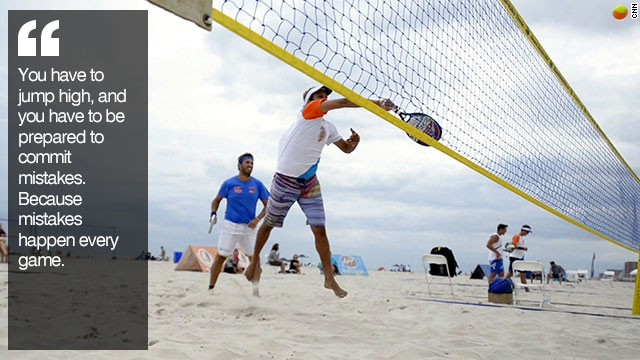 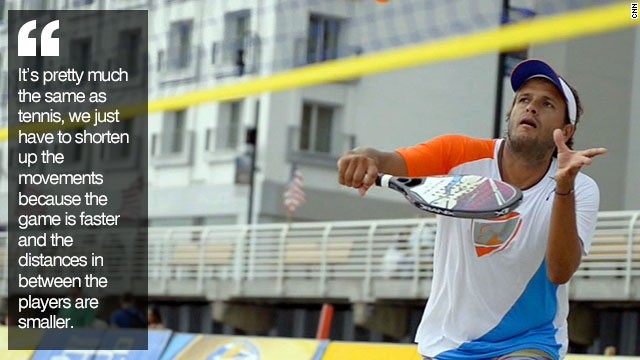 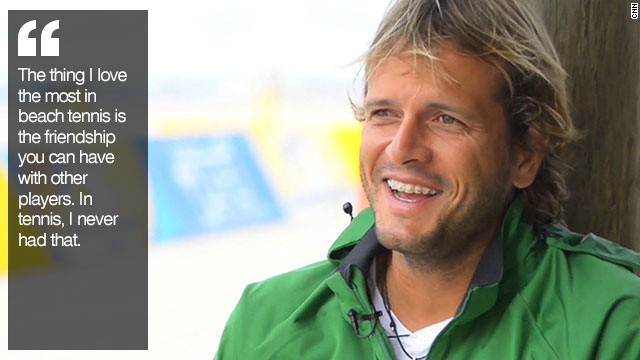 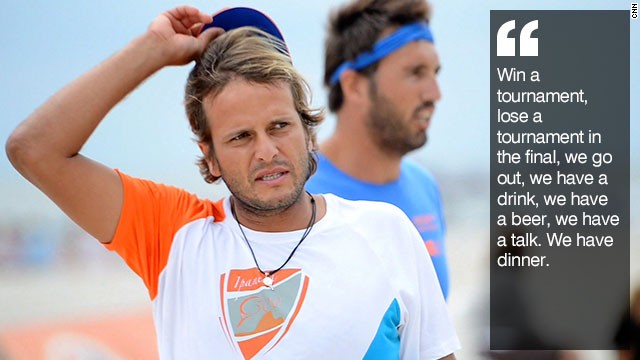 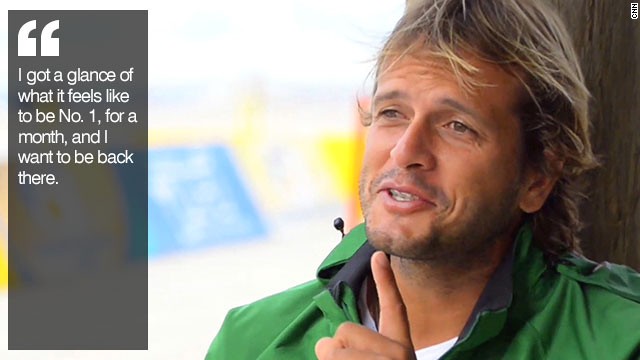 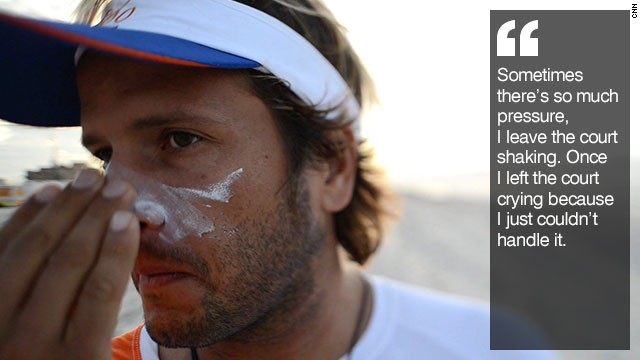 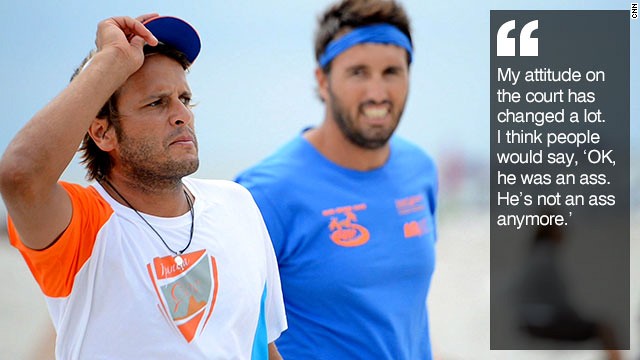 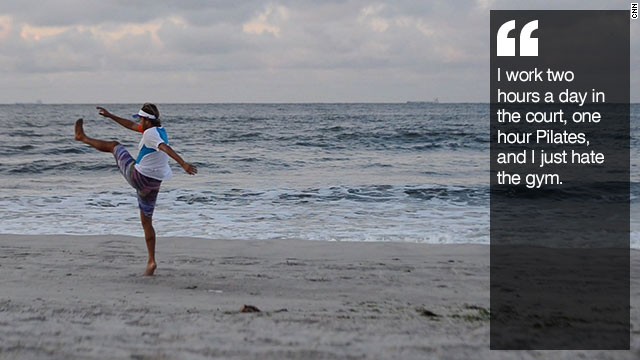 (CNN) -- Beach volleyball played on sun-kissed Brazilian sand conjures up many images in the mind. But beach tennis? What's that all about?

Vinicius Font is on a mission to change that perception as he muscles in on a sport -- think elements of the court mixed with those of volleyball -- that has been traditionally dominated by Italy.

"Everybody told me I was crazy when I started practicing my ass off, because there's no money in it," the Brazilian, who is the the first non-Italian to top the world rankings, tells CNN's Human to Hero series.

"But I saw the Italians playing and I said, 'I can play like them. I want to.'

"I started working hard for this. I would go on the beach with coconuts and trash cans and put them as targets for the serves and do sprints. All alone.

"Then my craziness got people -- more crazy people -- around me, so I started teaching beach tennis."

A popular pastime for nearly a century, the game was not formalized as a competitive endeavor until the 1990s by Italian Giandomenico Bellettini.

Unlike conventional tennis, the beach version does not allow the ball to hit the ground. As in volleyball, players serve and volley it over the raised net, diving around the sand to keep it in play with their paddle-like rackets.

"In the beginning I didn't like the game that much because it was quite slow. It was too slow. But then I tried more, and I saw the game evolving and I just fell in love with it," Font says.

"I found a coach, the Italian guy who brought the game to Brazil. We share an apartment and he's been helping me since I started."

In 2013 Font helped Brazil become the first team apart from Italy to win the world title, and this season he has spent a month as the sport's No. 1 player -- a year ahead of the goal he'd set himself.

"Everything happened really quickly, and I got a glance of what it feels like to be No. 1 -- and I want to be back there."

It's a far cry from when he started out in the sport.

Font used to go to work in Recreio in the morning, then in the afternoon he'd skip lunch and travel 40 minutes across Rio de Janeiro to Ipanema Beach, train with his coach, before heading back home to work until 10 p.m.

"I played tennis my entire life," Font says. "In 2008 a friend told me that there was this sport coming to Brazil. That I should try it because serve and volley is all I can do in tennis, so you can be good at this."

Font made his life easier by moving to Ipanema, and now has a team supporting him: two coaches, a nutritionist, a physical trainer, a Pilates trainer, a psychologist.

He can now look back and laugh at his early efforts in the sport, starting from his first serve in a proper tournament.

"The ball hit the side of the racket and went straight in the water. That was terrible, terrible. But funny," Font recalls with a smile, breaking into laughter as he does throughout the interview.

"My coach says that the way I play, it's very stupid -- and smart at the same time. Stupid because many times I do the wrong shot, but I believe so much that it actually ends up working, so that's the smart part of it.

"In order to play beach tennis, you have to be fast. Not only in the legs, but in the reactions.

"You have to jump high, and you have to be prepared to commit mistakes, because mistakes happen every game."

On the tour, Font regularly partners Alex Mingozzi in men's doubles; the Italian is ranked just below him in fourth, while world champions Alessandro Calbucci and Marco Caravini have returned to joint top.

"The thing I love the most in beach tennis is the friendship you can have with other players. In tennis, I never had that," Font says.

"Sometimes I had very bad arguments, sometimes got in fights in tennis. In beach tennis I've never been even close to this.

Font admits he has been seeking help from his psychologist to calm down his on-court attitude.

"I would get frustrated when my partner would make a mistake, and I would react really bad towards my partner," he says.

"My attitude on the court has changed a lot. I think people would say, 'Okay, he was an ass. He's not an ass anymore.' "

Font attributes his outbursts to the stress of trying to perform to his best.

"Sometimes there's so much pressure that I leave the court shaking," he says. "Once I left the court crying because I just couldn't handle the pressure.

"I won the match, but I knew that if I lost, a lot of people were counting on me -- my friends would go back too because it's a team competition."

Font also plays mixed doubles, but singles competitions are "just for fun" -- which is a reverse situation to normal tennis, where individual tournaments rule the roost.

It's too late for beach tennis to feature at Font's home Olympics in 2016, but he believes it is worthy of a place at sport's biggest showpiece -- just as beach volleyball has been played at the Games since 1996.

This year's world championships attracted a record 24 nations, and the international federation has 71 members, while there is an established circuit in the U.S.

Since 2008 its competitions have fallen under the auspices of the International Tennis Federation, which oversees the parent game and its offshoots.

"I really believe beach tennis will become an Olympic sport," Font says. "I don't want anyone to get mad at me, but there's sports like ... shooting an arrow at a target -- I mean, people are standing still. Nobody's actually watching that.

"I think beach tennis has everything to do with the Olympics. It represents a lot, there's a lot of friendship, fair play."

If it does eventually gain such acceptance, beach tennis will have much reason to thank its Brazilian trailblazer.